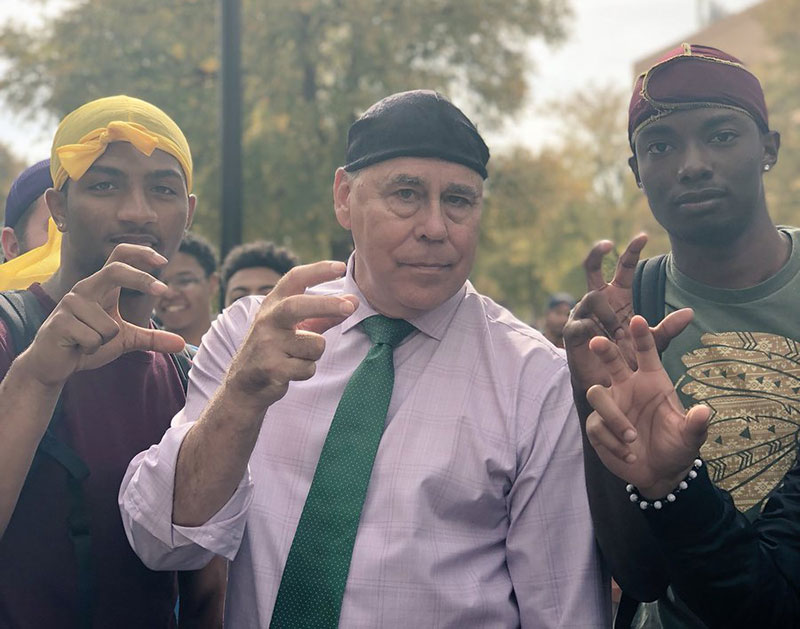 Students At The University Of North Texas Organized A “Durag Monday” During Homecoming Week, And Organizers Got The School President To Rock One Himself.

It’s been a while since we did a Crush of The Week post here at Central Track. But earlier this week, University of North Texas president Neal Smatresk did something that really caught our attention on social media. And we didn’t think it should go unnoticed.

The Finesse Kidz, an unofficial group of UNT student that formed through Twitter, organized a “Durag Day” on Monday to kick off a series of other themed days that it has slated to go down throughout the school’s Homecoming week events. To accomplish its goal — celebrating UNT’s black student population as well as the university’s diverse composition — the group encouraged people to wear durags and other headwear (turbans, headwraps, hijabs) that applied to their culture as a way of celebrating the varied backgrounds present within the campus community.

At one point in the day, the group gathered at the Library Mall, a communal area that sits just next to the Administration Building, for an informal gathering meant to further celebrate inclusivity at UNT. And it was here where Smatresk joined in on the action, donning a durag and all.

Dude even got his dance on:

While some questioned the president’s motives in doing this, one student who helped organize the event explained in a Twitter thread why he so appreciated Smatresk’s efforts. At one point in that thread, the strudent wrote the following: “Personally I appreciated the fact that he maybe stepped out of his comfort zone to show that he supported our intentions. I don’t believe any of us that were there felt offended or appropriated from his decision. Outside looking in, I can understand how it may look and why people may have mixed feelings about it. But a narrow lenses [sic] cannot capture the entire perspective.”

For the most part, though, it was clear that those involved in the event approved of Smatresk’s participation, as evidenced by their own videos and photos taken at the lively outing:

From where we’re sitting — and keep in mind that I’m a UNT alum myself — this seems like a genuinely cool effort from a guy who caught a lot of flack earlier this year for not being able to stop a semi-private event that had Donald Trump Jr. appearing as a guest speaker at an off-campus, school-associated speaker series.

Does Smatresk donning a durag make UNT a perfect campus? No, not by any means. But it’s a step in the right direction, for sure.

Part of being a student of color in college is knowing that administrations tend to be made of mostly of old white people. Seeing a university president go out and embrace your culture? That’s a nice morale boost for a lot of UNT students, some of whom may even be first-generation college students.

So kudos to you, President Smatresk, for seeing an opportunity to keep it real, and for showing the students who gathered at the Library Mall that you’re at least trying to do your part to make them feel included on campus.

Now, if we can just get you sipping on Abuelita hot chocolate and playing loteria once the holidays come around…