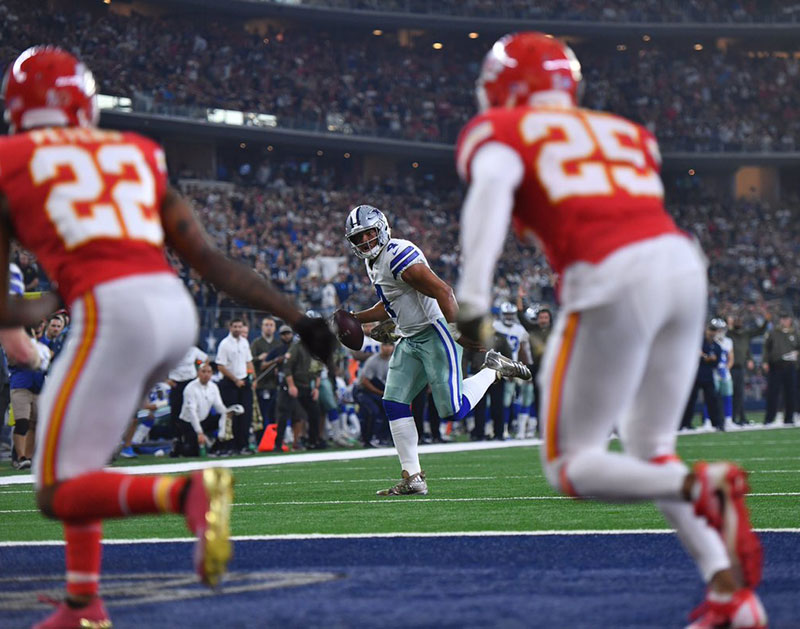 Despite Its High-Powered Offense, It Was The Dallas Cowboys’ Defense That Stifled The Chiefs And Earned The Team Its Third Straight Win.

Just a day after Dez Bryant’s birthday and on Ryan Switzer’s actual birthday, the Dallas Cowboys’ defense gave its offense quite the gift, shutting down a high-powered Kansas City Chiefs offense as the team pulled off a convincing 28-17 win.

Still, it was a former Cowboy who got honored the most on Sunday. In his first-ever return to AT&T Stadium as a broadcaster, the Cowboys honored Antonio Ramiro Romo with a two-minute-long, Jason Witten-narrated video thanking him for his career with the team.

Turns out I had no need to be so superstitious. Here are my notes from Sunday’s big W.

1. For a game that featured two of the best offenses in the game, this one sure started out high on defensive intensity. Each team opened the first quarter with punts. But while the Cowboys were able to right their ship in time, the Chiefs were never able to fully get on track.

2. For a defense that’s as highly touted as the Chiefs’ has been, they sure had their hands full with the Cowboys’ wide receivers in this game. I don’t think anyone saw such a big game coming from Terrance Williams in this one. His nine catches were a career high, and the 141 yards he tallied with those marked his second-highest total ever.  The rest of the receiving corps played pretty well too, with Bryant having six catches for 63 yards before he the game with a sprained ankle late in the fourth quarter and Beasley grabbing four receptions for just 24 yards but with two of them being touchdowns that came when they mattered.

3. With his 10-yard touchdown run in the second quarter, Dak Prescott became just the third Cowboys ever to run for 10 touchdowns in his career. But the commanding 14-3 lead that score gave the Cowboys to take into halftime was erased when the Cowboys defense had its lone brain fart on the day. With only two seconds left on the clock and the Cowboys in prevent formation, Alex Smith threw a short pass to Tyreek Hill that he took 56 yards to the house. What will forever go down in history as the “Hill Mary,” it was a pretty unbelievable play: The Cowboys D reacted late and then got burned on a video game-like juke from the talented Chiefs weapon.

4. That one obvious mistake at the end of the first half aside, it’s safe to say that Cowboys defensive coordinator Rod Marinelli came to play on Sunday. His D held the league-leading rusher Kareem Hunt to just 37 yards on the day, and just eight rushing yards in the first half. And while the Chiefs appeared to come alive for a moment in the second half as Alex Smith tossed a touchdown to Travis Kelce past Byron Jones to give the Chiefs a 17-14 lead, the Cowboys wouldn’t budge an inch on defense after that. As the Cowboys offense focused on time of possession and pounding the ball with Ezekiel Elliott, the Chiefs wouldn’t put up any more points in this game. And with the Chiefs in desperate need to play catch-up once down 28-17, Alex Smith unraveled, tossing his first pick of the year as Jeff Heath jumped into one of his passing lanes.

5. Is this Cowboys defense turning into the dominate force we’ve been missing for the past decade? I’m not so sure I’m ready to say that, but but the team is definitely improving on that side of the ball, with the defensive line impressing week in and week out by getting pressure on the opposing quarterbacks. David Irving got his sixth sack of the year on Sunday, continuing his streak of having a sack in every game since returning from suspension. And, hey, even first round pick Taco Charlton got in on the mix, registering his first career sack just before Heath snagged his INT.

Sunday’s win was the Cowboys’ third straight, and the team will look to continue its good fortune as it travels to Atlanta next week to take on a floundering Falcons team that’s lost four of its last five games. The Cowboys would do well to not rest on their laurels this week, though, as late-game injuries to Dez Bryant (ankle), Terrance Williams (ankle) and Tyron Smith (groin) could make this one closer than the pundits might have you believe.