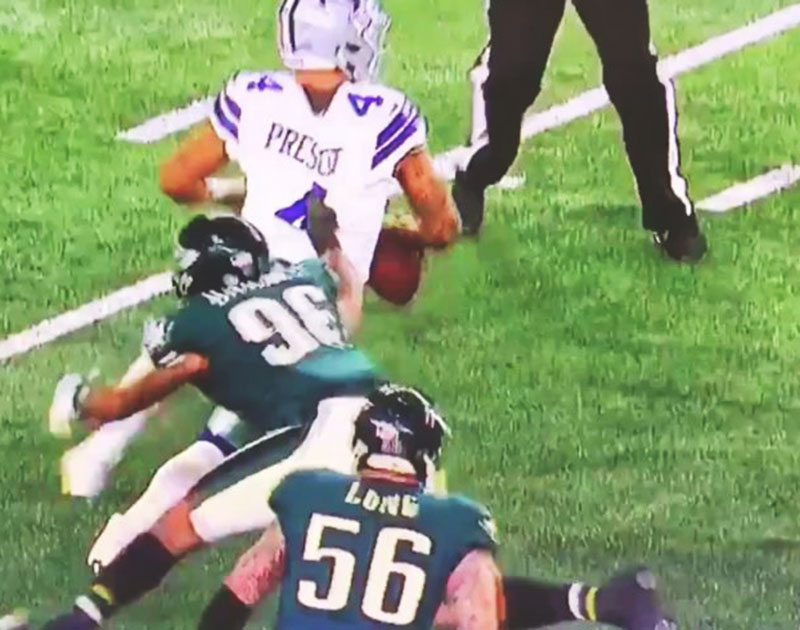 Dak Prescott Isn’t Living Up To The Hype, Plus Four More Takeaways From The Dallas Cowboys’ Devastating 37-9 Loss To The Eagles On Sunday.

Let’s get this out of the way from the jump: Anyone who headed into Sunday night’s Cowboys-Eagles matchup thinking the Cowboys were going to win with NFC East rivalry game was likely kidding themselves.

Hearing the news that right tackle La’el Collins would be questionable and safety Jeff Heath wasn’t going to play? On top of Zeke being out for the second game of his six-game suspension? Along with Tyron Smith and Sean Lee also being hurt and out for the game? Nope, things were not looking good.

But then the game actually started. And damn if that 61-yard kickoff return by Ryan Switzer to start the game didn’t get my hopes up — even if Dallas, driving the field with ease, only came away with a field goal after that gift of an opening play.

Maybe I was wrong in assuming the Cowboys weren’t going to win this one?

Nah, of course I was right. On the very next possession, Carson Wentz drove the Eagles down the field with even more ease, putting Philadelphia ahead 7-3 one a four-yard run from Kenjon Barner. And while the Dallas defense played above its pay grade in the first half and fill-in kicker Mike Nigent went 3-for-3 on first-half field goals to give the Cowboys a 9-7 lead heading into the half, the writing was on the wall.

Yeah, it was only a matter of time before things shook out the way they were supposed to. In the second half, the Eagles outscored Dallas 30-0, leaving town with a 37-9 victory and what essentially now amounts to an insurmountable lead in the NFC East standings.

Were there any positives to be had here? I’m not sure. But here are the observations I had over the course of this Cowboys loss.

1. The Eagles would go on to top their season average of 31.4 points per game in this game, but the young Cowboys defense held them to just seven points through two quarters. And that’s no small feat considering how Cowboys QB Dak Prescott threw two interceptions in the first half — one of which was a deflection off of Terrance Williams’ body and the other being a forced attempt to a covered Dez Bryant. Even with the extra first half chances, the Eagles weren’t able to capitalize.

2. The Eagles were a different team in the second half than in first. After they received the ball to begin the third quarter, they marched right on down the field for a touchdown within the first four minutes. Even after kicker Jake Elliott was forced to leave the game with a concussion, the Eagles kept on producing, even scoring on a two-point conversion to extend their lead to 15-9. Next, they followed up a 71-yard Jay Ajayi run with an 11-yard touchdown pass from Wentz to Torey Smith. And with another completed two point conversion, they pushed the score to 23-9 and started putting some nails in the Cowboys’ coffin.

3. For all the stressing out Cowboys fans have been doing about Zeke being suspended, the Cowboys run game wasn’t to blame for Sunday’s loss. Rod Smith showed flashes of potential even though he ended up with just 11 yards on eight carries, and Alfred Morris had himself a day, running for 91 yards on 17 carries.

4. Despite the hype of the game’s broadcast would have you believe, the quarterback play on both sides of the ball in this game was extremely forgettable. The two second-year starters here only combined for 313 passing yards. Wentz obviously had the better game of the two given his two passing TDs on the day, but he only barely completed more than 50 percent of his passes, going 14 for 27 on the day. Dak, meanwhile, couldn’t shoulder the load he needed to on this night; he only passed for 145 yards and ended up throwing three picks on the day. Worse, his relationship with Bryant still seems to be extremely tumultuous, as Dez only registered 65 yards on eight catches.

5. The Eagles defense is legit. And when their swarming defense returned a fumble for 37 and put the Eagles up 37-9 with just 10 minutes left in the game, the game was officially over. Props, I suppose, to the Cowboys coaching staff for not completely giving up at that point, though; they waiting until just three minutes were left in the game before they subbed in their reserves and got their backups some game burn.

OK, so where do we go from here? I’m not sure, especially given how the injury bug is just not letting up on this Cowboys team. Sean Lee is expected to miss at least one more week, and no one’s quite certain where Tyron Smith is in his recovery. Meanwhile, you can now add linebacker Anthony Hitchens to the laundry list of missing players, too, as he left this game late with a groin injury.

The timing of all that isn’t exactly great, as the Cowboys’ annual Thanksgiving game will find them welcoming to town a San Diego Chargers that’s a bit better than its 4-6 record would indicate.

Lets just hope Dallas can get back to its winning ways on Thursday. It’s the team’s only hope, really, since they definitely aren’t catching the Eagles in the race for the NFC East crown, and they currently sit two games back from the last wildcard position in the NFC.

But, hey, at least here’s something to be thankful for: Antonio Ramiro Romo is back on the call for the Cowboys on Thursday.