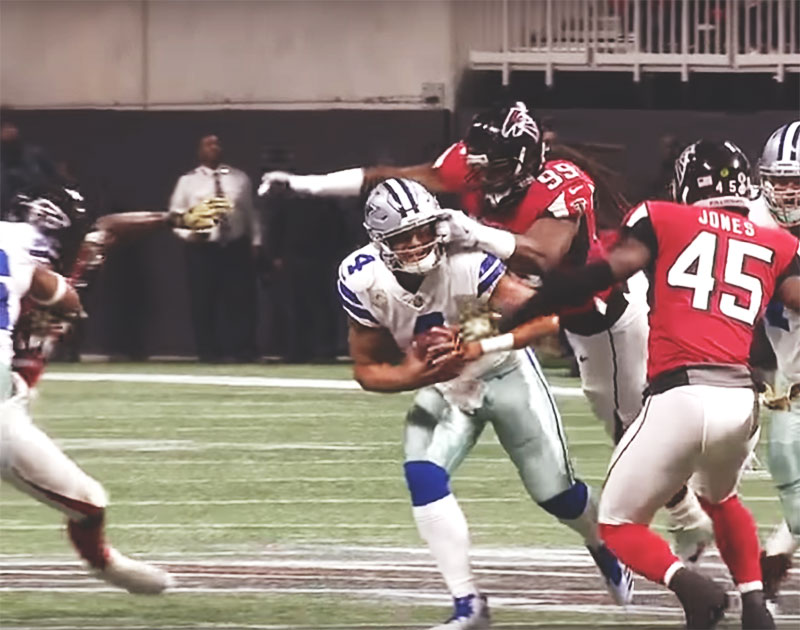 A Week Ago, The Cowboys Were On Top Of The World. Then The Zeke Suspension Dropped, The Injury Bug Hit And The Atlanta Falcons Exposed The Team’s Flaws.

After reeling off three straight wins and upping their record to 5-3 thanks to a convincing win over a respectable Kansas City Chiefs team last week, Cowboys fans had reason to feel pretty good about the state of their team early last week.

Then things started to take a turn for the worse.

On Thursday, the long-looming Ezekiel Elliott suspension was finally upheld and ruled enforceable by the league, meaning his six–game absence from the team roster would start as the team headed to Atlanta to face what looked like a fairly beleaguered Falcons team over the weekend.

Then, on Saturday, the news dropped that perennial All-Pro left tackle Tryon Smith too would also miss the Falcons game after the sprained groin he suffered against Kansas City still hadn’t fully healed.

Add that news to the fact that the team is still also missing ace kicker Dan Bailey and, all of a sudden, things weren’t looking so hot for the squad.

The good news? At least the defense, anchored by Sean Lee and a defensive line that has turned into a fearsome unit this season, would still be healthy. Well, about that…

Sunday’s 27-7 loss in Atlanta was a gut-punch, a frightening realization of the worst fears of Cowboys’ fans.

Here are my top observations from the downright depressing loss.

1. Smith might not have been playing his best ball this year, but the guy’s clearly an irreplaceable part of this offense’s machine. His absence on Sunday was just extremely noticeable — far more so than the absence of Elliott. Without Smith, and with revolving door Chaz Green filling in at left tackle, the offensive line allowed the Falcons to register seven sacks on Dak Prescott. Seven! Green himself could be blamed for most of those and was eventually benched and replaced by former first round pick Byron Bell, who also allowed a late sack on Prescott. Falcons defensive end Adrian Clayborn just tore them apart, netting six sacks on the day — good enough to tie him for the second-most sacks all-time in a single NFL game, just one sack behind the legendary Derrick Thomas’ seven-sack day against the Seattle Seahawks in 1990.

2. Ever since he was drafted, the argument against Ezekiel Elliott has been that pretty much anyone could run for 1,000 yards behind the Cowboys offensive line. With Tyron Smith out, that argument falls a little flat. But I still think Zeke replacements Alfred Morris and Rod Smith showed some promise here and there on Sunday, despite only combining for 67 rushing yards on the day.

3. Speaking of impressive rushing performances, Prescott chipped in 42 rushing yards of his own on Sunday, despite being abused by the Falcons defense all day long. His feet even accounted for the Cowboys’ sole score in the day, as he took an 11-yard run in for a score after Cowboys rookie safety intercepted Matt Ryan. But, after that run put the Cowboys up 7-0, things went downhill fast from there.

4. Even with the offense missing some key weapons, the Cowboys looked like they had a shot early on in this one. But that all changed as soon as middle linebacker Sean Lee hurt his hamstring at the end of first quarter. At that point, the Falcons run game came alive. Honestly, the Dallas defense couldn’t even stop a nosebleed on Sunday. And this was after Anthony Hitchens concussed Falcons running back Devonta Freeman on the first drive of the day and knocking him out of the rest of the game. No matter what the Cowboys tried, the Falcons had their way on Sunday. Every time it looked as if the Cowboys would come up with a big stop, the Falcons offense came up with an answer to keep their drives moving. It wad frustrating to watch, to say the least.

5. Dak Prescott is a fine football player, but there’s only so much one man can do. With the run game struggling, the offensive line looking like Swiss cheese and his wide receivers just looking dismal, everything was on Prescott’s shoulders on Sunday. And give the man credit — he tried! He literally looked liked he was running for his life on a few plays as he escaped swirling linemen and fought to gain first downs for his team. But a man only has so much in his tank, and Dak was clearly gassed by the end of the first half, making it clear to any observer at that point that this game had become a lost cause.

With Zeke out five more games and the injuries continuing to pile up — safety Jeff Heath also was forced to leave Sunday’s game with a concussion — the Cowboys are going to be faced with an uphill battle in the coming weeks. The timing couldn’t be worse, either, as the hated Philadelphia Eagles are slated to come into Jerry World next week boasting the league’s best record (8-1).

All we can do at this point, I suppose, is hope that Smith, Lee, Heath and Bailey get well super. Like super soon.