Cowboys Game Notes: Get That Paper! 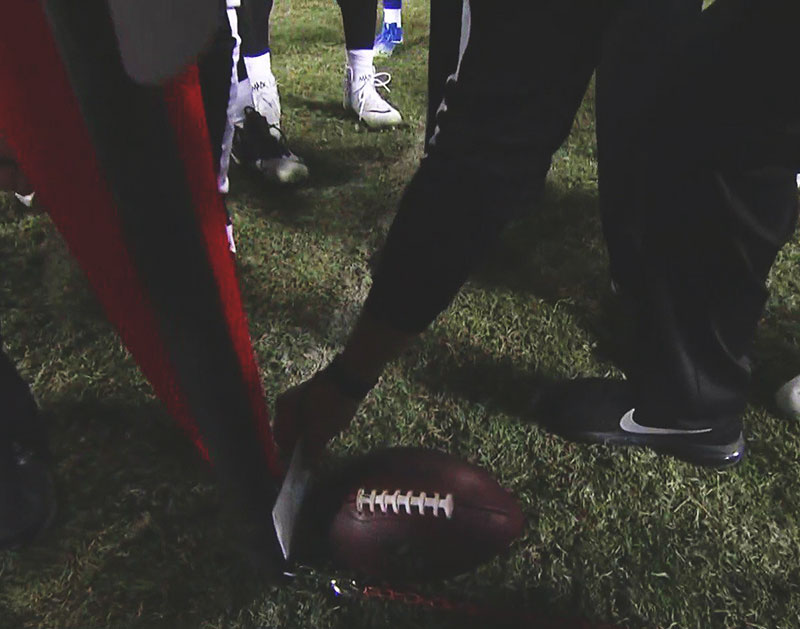 With Some Help From A Former Foe And Strong Play From Their Young Secondary, The Cowboys Somehow Managed To Keep Their Season Alive Last Night.

Heading into Sunday night’s game in Oakland, the Dallas Cowboys had one goal in mind — getting a win. And, in the end, they got the victory they so desperately needed in order to keep alive any hopes of reaching this year’s playoffs.

How they got it, though, will be remembered for years to come.

Yeah, last night’s 20-17 win was more than just one of the most entertaining and bizarre games of the 2017 NFL season; it will go down in Cowboys and NFL lore alike for the way its outcome was impacted by a man who has a knack for effecting Dallas’ fate.

That man would be Gene Steratore, the NFL referee who called the catastrophic “Dez Caught It” playoff game against the Green Bay Packers back in 2015. Last night’s match-up was Steratore’s first time reffing a Cowboys game since that dreadful day — a fact not lost on Cowboys fans, who were all too aware of the fact that their team had previously gone 2-5 in games he’d reffed.

Seems Steratore was also aware of that history. All game long, calls kept going the Cowboys’ way, as if Steratore was trying to make up for his blunder in that 2015 playoff game — like he was winking at the fan base and telling them, “My bad about the Green Bay game, Dallas, but I gotchu this time.” The numbers bear that out too, as the Raiders were called for 14 penalties totaling 105 yards on the night — twice the number of calls made against Dallas and, not counting a questionable 55-yard pass interference call on rookie cornerback Jourdan Lewis, basically twice the yardage too.

Of course, Steratore’s biggest influence on the game wasn’t on a penalty call at all, but on a yardage one. With the game tied at 17 apiece during a vital fourth-quarter Cowboys possession, Dak Prescott linked up with Jason Witten for a third down completion that just came up short of getting the team a much-needed first down that would’ve continued their would-be game-winning drive. Still, it was close enough for head coach Jason Garrett to elect to go for the first on 4th and 1.

Following Prescott’s ensuing quarterback sneak, things got really crazy. To the naked eye, it was tough to determine if Prescott’s sneak had been successful. It was close; that was clear. But how close was it? Closer than ever seen before in the NFL, maybe. When Steratore and his crew brought out the chains to determine if the spot they’d awarded the Cowboys was enough to get them the first, it was still tough to tell if the Cowboys had gotten it.

And that’s what Steratore whipped out a goddamn piece of folded paper to determine whether the tip of the football or the first-down yard-stick was farther downfield. Since the paper showed no distance difference between those two markers, Steratore called the spot a first down.

Talk about unprecedented! It’s pretty nuts when you think about it, too: The difference between the Cowboys’ playoff hopes remaining alive or their season effectively ending was literally paper-thin. Was it enough to make up for Steratore’s botched call in Green Bay a couple years back? Only if the Cowboys could finished their drive with points and then hold off the Raiders from scoring again.

Fortunately for Dallas, that’s how things played out. Fittingly, a one-handed, 40-yard Dez Bryant catch set up a Dan Bailey field goal from 19 yards out that gave the Cowboys a 20-17 lead after a goal line stance by the Raiders defense. And while the Raiders valiantly drove the field (with some help through that previously mentioned pass interference call on Lewis ) on their next possession, then game effective ended when a scramble from Raiders QB Derek Carr resulted in him fumbling the ball through the end zone and the Cowboys getting the ball back on a touchback call. From there on out, it was kneel time, and the Cowboys got their W.

For his part, Dez was pretty pleased with the way things played out. Well, pleased enough:

Dez Bryant on Gene Steratore using a piece of paper to determine Cowboys’ key first down: “We got the W tonight so I guess that replaces [his no-catch call in Green Bay]. Well, nothing will ever replace that, but I’m happy we got the W.”

Clearly, officiating was the big factor in last night’s win. But, if there was a second big story on the night, it was the Cowboys’ young secondary, which continues to shine.

Rookies Jourdan Lewis, Xavier Woods and Chidobe Awuzie held their own for most of this game. They were up against some veteran players, but stood their ground and continued to fuel the hope that this unit is just scratching the surface of where it could one day go.

Now, the secondary wasn’t flawless by any means. On the Raiders’ final drive of the game, Carr threw a third-and-long pass to Seth Roberts that was perfectly jumped by cornerback Anthony Brown — a Pick 6 laid out on a platter that definitely would’ve sealed the game — but, as they say, cornerbacks play D because their hands aren’t good enough for them to be wide receivers. That was the case here, for sure, as Brown dropped an interception on one of the better quarterbacks in the league. On the very next play, Lewis’ was called for the pass interference that gave the Raiders hope and every Cowboys fan heartburn.

But, after putting the team in that position, the secondary then made up for its earlier errors. Or, specifically, Jeff Heath did, making two massive red zone plays that saved the day for Dallas. First he broke up a rope from Carr in the end zone. Then, on 3rd and 3, as Carr escaped pressure from Taco Charlton and Demarcus Lawrence and scrambled toward the end zone, a running-at-full-speed Heath caught Carr as he dove toward the end zone, forcing the fumble that sputtered past the goal line and then out of bounds — a touchback by rule.

With that, the Cowboys walked away with a heart-pounding road win. There’s a reason why this team gets nationally broadcast so frequently, and it’s because nail-biters like this are, for better or worse, just part of the team’s DNA.

But, as they say, it’s not how you win, it’s how many you win. And with three straight wins in their pocket and their playoff hopes somehow not yet dashed, the Cowboys are now emerging from Ezekiel Elliott’s six-game suspension fairly intact, having won half of those contests.

With two games remaining and their best player returning to the field, the Cowboys have remarkably managed to keep this season interesting.

Ha. Of course they have.