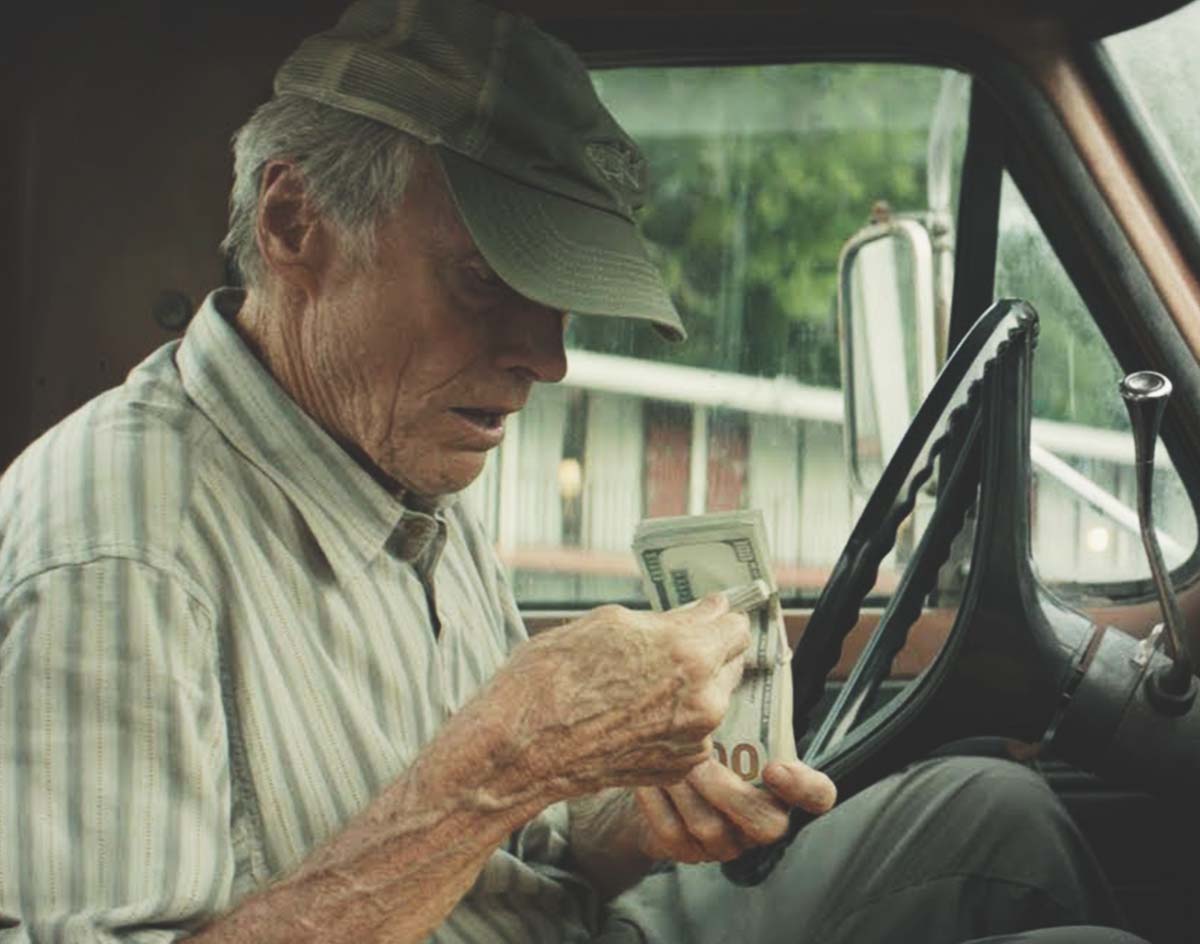 On The Mule, Vice, Holmes & Watson, The Favourite And The Rest Of December 2018’s Top New Releases, Limited Showings and Repertory Screenings Around Dallas.

There’s a lot competing for your attention at the theaters in this final month of 2018.

But, frankly, some of the options look better than others. I might be the only person in the world who’s not excited for Mary Poppins Returns, Aquaman or Bumblebee — but, hey, y’all have fun with those. Some of you may also enjoy the inexplicable PG-13 edit of Deadpool 2, and something else called Mortal Engines that’s bound to be the biggest flop of 2018.

There’s plenty else to see, though! Early buzz on the animated Spider-Man is insanely good, and three likely Best Picture nominees all earn a limited release this month. And while you can’t walk more than two feet without finding a screening of the same Christmas movies you already have on DVD or can watch endlessly on cable, there are plenty of more out-there repertory choices as well.

The Mule.
Director: Clint Eastwood.
Writer: Nick Schenk.
Cast: Clint Eastwood, Bradley Cooper, Michael Pena, Andy Garcia.
Opens: Friday, December 14.
Clint Eastwood is 84 years old. He started shooting this thing in June, and had a trailer out by October. Meanwhile, it took me more than a year to move a busted TV out of our guest room. With The Mule, Clint steps in front of the camera for the first time in six years, playing a drug smuggler based on real-life WWII veteran Leo Sharp. He’s pursued by Bradley Cooper’s dogged DEA agent in what will probably be the sleeper hit of the holidays. Expect an efficient, but not super-stylish, thriller. It will at least be better than Sicario: Day of the Soldado.)

Spider-Man: Into the Spider-Verse.
Directors: Bob Persichetti, Peter Ramsey, Rodney Rothman.
Writers: Phil Lord, Rodney Rothman.
Cast: Shameik Moore, Jake Johnson, Hailee Steinfeld, John Mulaney.
Opens: Friday, December 14.
I know, I know. We don’t need yet another Spider-Man. But when it’s from the team that did The LEGO Movie, maybe we do. This kaleidoscopic animated tale combines a ton of different styles and iterations of Spider-Man (including Spider-Gwen and Peter Porker). Still skeptical? The New York Film Critics Circle said it’s the best animated film of the year.

Holmes & Watson.
Director: Etan Cohen.
Writer: Etan Cohen.
Cast: Will Ferrell, John C. Reilly, Ralph Fiennes, Rebecca Hall.
Opens: Tuesday, December 25.
I’m aware that we already have a comedic take on Sherlock Holmes that opened around Christmas, but that was almost a decade ago. (Checks calendar, realizes that went by too fast.) Besides, putting Will Ferrell and John C. Reilly together is guaranteed to make me laugh, no matter how stupid the hijinks they get into. And casting Ralph Fiennes as Moriarty is so perfect, I’m amazed it hasn’t happened yet.

Vice.
Director: Adam McKay.
Writer: Adam McKay.
Cast: Christian Bale, Amy Adams, Steve Carell, Sam Rockwell.
Opens: Tuesday, December 25.
My most anticipated movie of the back half of 2018 arrives in theaters for Christmas. Christian Bale has transformed himself yet again, this time playing Dick Cheney, the power-grabbing, manipulative vice president who helped lead our country into Iraq and fed our addiction to oil. Adam McKay, moving further away from his comedy background with Will Ferrell, has assembled another all-star cast for his continuing look at how America got ripped off in the early ’00s. (Check out The Big Short if you haven’t already.)

The Favourite.
Director: Yorgos Lanthimos.
Writer: Deborah Davis, Tony McNamara.
Cast: Olivia Colman, Rachel Weisz, Emma Stone, Nicholas Hoult.
This is one of my favorite movies of the year: Sexy, twisted and hilarious. Olivia Colman plays Queen Anne, an easily manipulated British ruler. Competing for her affections are icy Sarah (Rachel Weisz) and her warmer, but no less cunning, cousin Abigail (Emma Stone). There’s a lot of insanity and sexual gamesmanship, so this is not your parents’ “wig movie.” The technical aspects are perfect, but it’s the razor-sharp script and trio of brilliant performances that really shine.

Roma.
Directors: Alfonso Cuarón.
Writers: Alfonso Cuarón.
Cast: Yalitza Aparicio, Marina de Tavira, Diego Cortina Autrey, Carlos Peralta.
I’ll have to evaluate fully towards the end of the year, but for my money, this is probably the best movie of 2018. Alfonso Cuarón delivers yet another masterpiece in this effort that’s loosely based on his own experiences growing up in Mexico City in the ’70s. It’s a moving portrayal of a trying year in a family’s life, seen through the eyes of their longsuffering housekeeper (Yalitza Aparicio, revelatory). It’s both sad and hopeful, and features several scenes that on their own would be among the best of the year. It’s getting a decent theatrical release from Netflix, who are hoping it will be their big Oscar contender. But you can also watch it at home starting December 14.

Perfect Blue.
Director: Satoshi Kon.
Writer: Sadayuki Murai.
Cast: Junko Iwao, Rica Matsumoto, Shinpachi Tsuji, Masaaki Okura.
Playing At: Inwood Theatre.
Showing: Friday, December 7; Saturday, December 8.
One of the most acclaimed anime films of all time is this psychological thriller that was a major influence on Darren Aronofsky. Its protagonist is Mima, a pop singer who is looking to make her break into acting, but finds herself losing her grip on reality. Despite its re-release being distributed by GKIDS, this is absolutely not a family-friendly Studio Ghibli film.

A December to Dismember.
Directors: Various.
Writers: Various.
Cast: Various.
Playing At: Alamo Drafthouse Richardson.
Showing: Saturday, December 8.
If you missed out on Alamo’s regular “Dismember the Alamo” marathon, the Richardson location is offering its second annual mini-festival of holiday-themed horror. $20 gets you three yuletide slashers, some bloody stocking stuffers and a ho-ho-horrific ugly sweater competition. Like all good presents, you won’t know what you’re getting until you show up.

The Nightmare Before Christmas.
Director: Henry Selick.
Writers: Michael McDowell, Caroline Thompson.
Cast: Danny Elfman, Chris Sarandon, Catherine O’Hara, Ken Page.
Playing At: Majestic Theatre.
Showing: Thursday, December 13.
I’ll admit: I wasn’t a fan of this as a kid. It took me several years to realize its brilliance. But Tim Burton’s haunted Christmas tale is like its characters: a little ugly, very determined and eventually heartwarming (in a twisted way). If you’re sick of the candy-colored Christmas specials, take your kiddos to this. (Or just re-live your Hot Topic days.)

The Lady Vanishes.
Director: Alfred Hitchcock.
Writers: Sidney Gilliat, Frank Launder.
Cast: Margaret Lockwood, Michael Redgrave, Paul Lukas, May Whitty.
Playing At: The Magnolia.
Showing: Tuesday, January 1.
One of Alfred Hitchcock’s most acclaimed pre-Hollywood films, this mystery is celebrating its 80th anniversary. Margaret Lockwood stars as a train traveler who befriends an elderly woman. But no one else on the train seems to remember the old woman at all. Where could she be? It’s no surprise that plenty of movies in the following years have ripped off elements of this, including Breakdown and Flightplan. I’ll also guarantee you that, should you head to this screening, you will be the youngest person at this screening by at least 30 years.