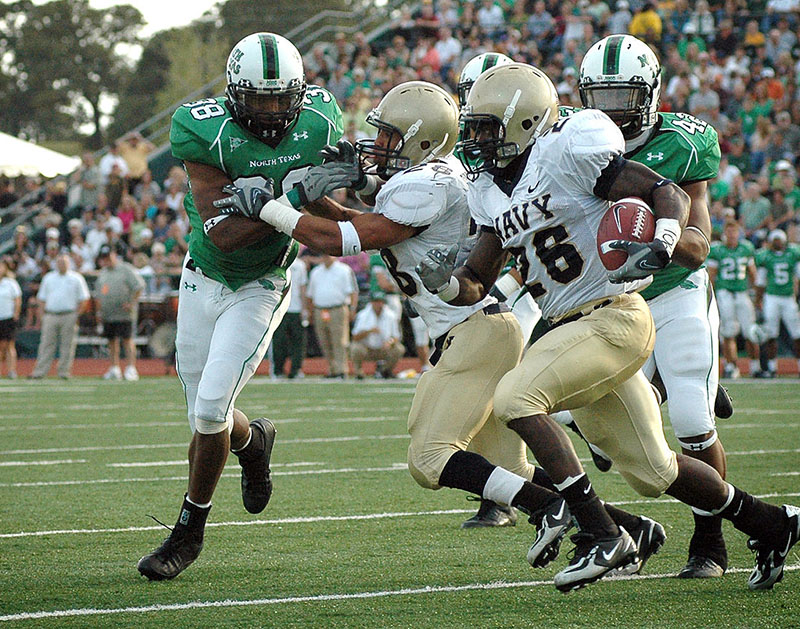 The University Of North Texas Is Having One Of Its Best Football Seasons Ever, And It Wants To Cap It Off With A Conference USA Championship This Weekend.

It’s a good year to be a North Texas area college football fan.

The University of North Texas is having one of its best football seasons ever, currently boasting a 9-3 record. The Mean Green will now try to improve upon that record by winning it’s first Conference USA Championship when faces off against Florida Atlantic University on Saturday morning.

UNT will be going into this game looking for revenge in this one, as FAU won the regular season matchup 69-31 when the Mean Green defense gave up a whopping 804 yards. That may sound bad, but that loss was a turning point for North Texas, as the team followed it with a five-game winning streak and went on to win the Conference USA West Division for the first time in school history. A win on Saturday would make North Texas eligible for one of three bowl games: the New Mexico Bowl, Bahama Bowl or the Armed Forces Bowl.

“We’ve got to learn from our previous mistakes and make sure we are completely focused, which we will be,” head coach Seth Littrell told Mean Green Sports. “Any time you have the opportunity to compete for a championship, the guys are going to be ready. We’ve had a terrific week of preparation. The biggest thing is learning how they tried to attack us last time and know how we will try to attack them. It’s a little bit of cat and mouse; they’re going to change some things and so will we.”

If North Texas does lose in its conference championship matchup, the team will head to the Heart of Dallas Bowl, a game the Mean Green is no stranger to, having played in it twice in a span of five years. In 2014, North Texas beat the University of Nevada, Las Vegas 36-15 and lost to Army 38-31 in 2016.

Meanwhile in Funkytown, TCU will attempt to to upset Oklahoma in the final regular season game of the Big 12 Conference as it aims to win its first conference title since 2014 this weekend. A win against No. 2-ranked Oklahoma would give TCU just the slightest chance at maybe sneaking into the Top Four and making the College Football Playoff. Win or lose, TCU is projected to either play for the Cotton Bowl, the Fiesta Bowl or the  Alamo Bowl.

Not to be forgotten here in Dallas, there’s also Southern Methodist University, a team that became bowl eligible by finishing third in the American West Conference with a 7-6 record. Right now, it’s looking like the Mustangs will be heading to the Frisco Bowl.

Its been a strange season for Texas college football, with traditional powerhouses like the University of Texas, Baylor, Texas Tech and Texas A&M all being power ranked below both TCU and UNT as the season closes out.

But, hey, let’s put that behind us for this weekend and be good Texans as we cheer the Mean Green and the Horned Frogs onto victory.