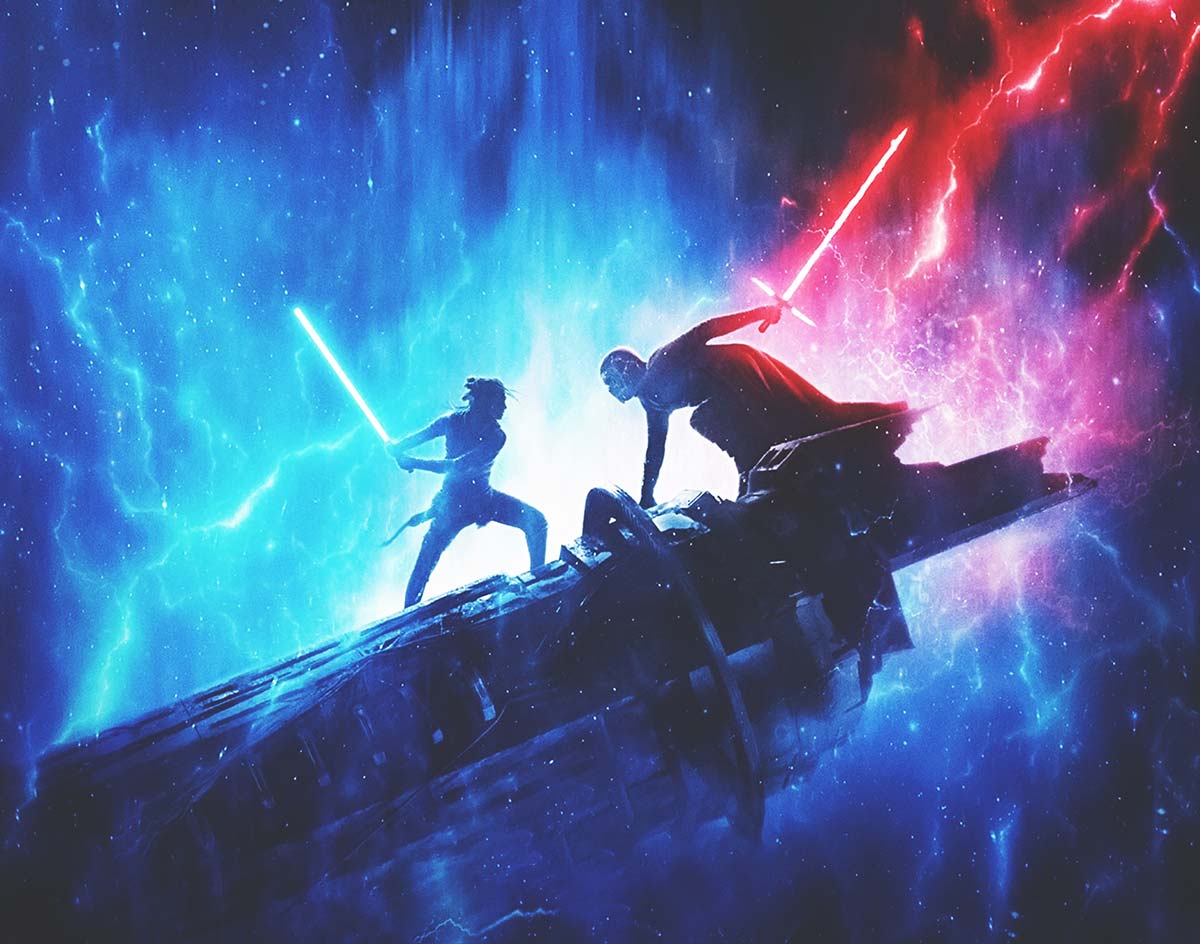 On Star Wars: The Rise Of Skywalker, Bombshell, Richard Jewell And The Rest Of December 2019’s Top Film Options In And Around Dallas.

It’s a little hard to believe we’re already through another year — and another decade. (Look for our film writers’ picks for best of both in the near future!)

Also hard to believe? There are indeed some other movies coming out besides Star Wars this season, including another real-life drama from Clint Eastwood, a stellar adaptation of Little Women, some truly insane indie movies and a slate of Christmas movies for every taste.

That in mind, here are the best options coming to area cinemas this month.

Richard Jewell.
Director: Clint Eastwood.
Writer: Billy Ray.
Cast: Paul Walter Hauser, Sam Rockwell, Kathy Bates, Olivia Wilde.
Opens: Friday, December 13.
Clint Eastwood’s still out here at 89 years old putting us all to shame. Seriously: He started shooting this movie over the summer, and it’s already out in theaters. Sure, this is yet another story about an American hero. But this time it’s about Richard Jewell (Paul Walter Hauser), the security guard who discovered a bomb in Centennial Park during the 1996 Summer Olympics, and was wrongfully accused of planting it and crucified by the media. There will probably be some unfair portrayals of journalists and law enforcement here, but Eastwood’s still got plenty of skill in crafting a compelling movie, even when we know the outcome.

Bombshell.
Director: Jay Roach.
Writer: Charles Randolph.
Cast: Charlize Theron, Nicole Kidman, Margot Robbie, John Lithgow.
Opens: Friday, December 20.
Another tricky media-centered film out this month is this dark comedy about the sexual harassment scandal at Fox News. It could be great — or terrible. It’s definitely got an incredible cast and make-up crew (seriously, Charlize Theron looks exactly like Megyn Kelly here), but there’s a real possibility the film might make heroes of these women, which is… complicated. While they obviously didn’t deserve any abuse, they were also responsible for spreading lies, hatred and xenophobia on a regular basis while working at the cable news station. After getting burned by last year’s Vice, I’m cautiously optimistic.

Star Wars: The Rise of Skywalker.
Director: J.J. Abrams.
Writers: J.J. Abrams, Chris Terrio.
Cast: Daisy Ridley, Adam Driver, John Boyega, Oscar Isaac.
Opens: Friday, December 20.
I’m firmly in the “Last Jedi was great” camp, so take my opinion with a grain of salt — especially since bringing back J.J. Abrams screams “We gotta play it safe and give the fans exactly what they want again.” I’m a little less enthusiastic than your average Star Wars fan about this one, but the cast has been tremendous – better than any previous trilogy’s cast – and I expect a satisfying, if not bold, finale to the Skywalker saga.

Little Women.
Director: Greta Gerwig.
Writer: Greta Gerwig.
Cast: Saoirse Ronan, Emma Watson, Florence Pugh, Eliza Scanlen.
Opens: Wednesday, December 25.
It’s not like we needed another version of Louisa May Alcott’s classic novel, but Greta Gerwig wasn’t interested in just another adaptation. Her take is slightly radical, with a lot of scenes that take place years after the end of the novel, thus deepening the relationships between the sisters. Purists may balk, but film-goers of any age will find plenty to respond to here, even if it doesn’t seem like their kind of movie.

A Hidden Life.
Director: Terrence Malick.
Writer: Terrence Malick.
Cast: August Diehl, Valerie Pachner, Matthias Schoenaerts, Michael Nyqvist.
A slightly different World War II film than we’re used to seeing, Terrence Malick’s latest gorgeous film tells the story of an Austrian farmer (August Diehl, not playing a Nazi for once) who refuses to swear allegiance to Hitler. While suffering imprisonment and torture, he resists, knowing in his heart he can’t affirm evil, even as his neighbors and religious leaders tell him to give in. If only this were relevant to today in some way… Oh, wait.

Uncut Gems.
Directors: The Safdie Brothers.
Writers: The Safdie Brothers, Ronald Bronstein.
Cast: Adam Sandler, Idina Menzel, Julia Fox, Kevin Garnett.
Another wild ride from the Safdie Brothers, whose Good Time was one of the most unexpected and nerve-wracking films of the decade. Sandler gives his best performance since Punch-Drunk Love here as Howard, a degenerate gambler barely keeping his head above water. He owes $100,000 to a local bookie and his plan to both pay off his debt and strike it big involves a giant rock from Africa, Kevin Garnett and a critical NBA playoff game. You won’t catch your breath for two straight hours, but you may want to temper your expectations — especially if you haven’t seen any of the brothers’ previous work.

Black Christmas.
Director: Bob Clark.
Writer: Roy Moore.
Cast: Olivia Hussey, Keir Dullea, Margot Kidder, John Saxon.
Playing At: Texas Theatre.
Showing: Sunday, December 8.
Before you see the new PG-13 remake, you can check out the gory Canadian original! Yes, this is the same Bob Clark who made A Christmas Story, although I wouldn’t recommend putting this one on for your whole family. Coming out two years before Halloween, this holiday-themed slasher is pretty low-budget. But if you like your Christmas movies on the darker side, this is a tasty treat.

Merry Scary Christmas.
Playing At: Alamo Drafthouse Richardson.
Showing: Sunday, December 15.
Looking for more holiday horror? the Texas Horror Cult is hosting this competition, where 20 shorts will offer up their take on the niche genre. All of the entries were shot in Texas, so there’s plenty of local flavor too. Who knows? You may be seeing the work of the next Jordan Peele or John Carpenter.

White Christmas.
Director: Michael Curtiz.
Writers: Norman Krasna, Norman Panama, Melvin Frank.
Cast: Bing Crosby, Danny Kaye, Rosemary Clooney, Vera Ellen.
Playing At: The Magnolia.
Showing: Tuesday, December 17.
It’s corny as hell, but you know your parents (or grandparents) are going to want to see something sweet and wholesome for the holidays, and this is a million times better than whatever Hallmark movie is currently airing. One of the first films to shoot extra-wide and use higher quality sound, the musical numbers are the real reason to see this (if you somehow never have before). Sure, the plot is paper-thin, the romance is unconvincing and the runtime is too long. But those song-and-dance scenes are dazzling.

Gremlins.
Director: Joe Dante.
Writer: Chris Columbus.
Cast: Zach Galligan, Phoebe Cates, Corey Feldman, Dick Miller.
Playing At: Inwood Theatre.
Showing: Friday, December 20; Saturday, December 21.
A nasty little bit of Christmas mischief, this goofy horror-comedy has endured for 35 years for a reason. I certainly wouldn’t call it a great movie, no. But it’s still a lot of fun, even if you’ve seen it countless times (which you probably have).