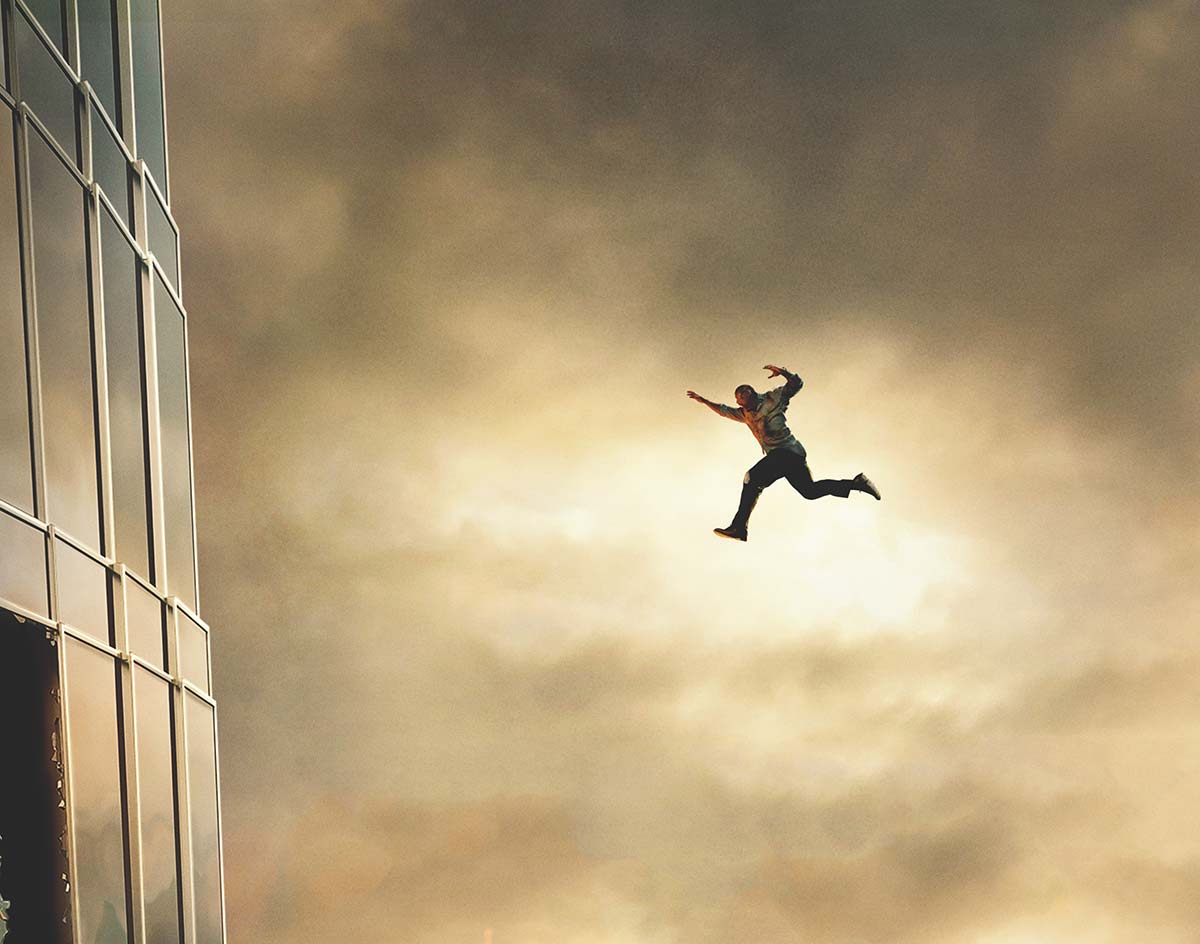 Sure, most of this month’s major releases are just here so you can stuff popcorn in your face while you watch things explode. But Ant-Man & The Wasp and Teen Titans Go! To the Movies will at least provide some jokes in between all that mayhem.

Really, it’s the limited releases where it’s really at these next few weeks, as two of the best movies of the year will open in your smaller theaters. Both just happen to be wild, unique debuts about young black men trying to make ends meet in Oakland.

Meanwhile, your repertory screenings feature a double dose of Robert Mitchum in black and white. If you can’t get excited about that, well, I don’t know what to tell you.

Ant-Man and the Wasp.
Director: Peyton Reed.
Writers: Chris McKenna, Erik Sommers, Paul Rudd, Andrew Barrer, Gabriel Ferrari.
Cast: Paul Rudd, Evangeline Lilly, Hannah John-Kamen, Michael Douglas.
Opens: Friday, July 6.
While we sadly never got Edgar Wright’s take on Marvel’s C-list shrinking guy, Peyton Reed’s Ant-Man was a totally adequate summer movie, another cog in the MCU machine. (It also had a killer performance from Michael Pena.) This sequel looks like it can only go up from there, with Evangline Lilly’s Wasp joining Paul Rudd’s Ant-Man in fighting a new villain (Hannah John-Kamen’s Ghost). And even though we haven’t seen her in any trailers, Michelle Pfeiffer co-stars as the original Wasp, who disappeared decades ago. If the film allows her to shine, adds in some more great Pena monologues and reduces the technical jargon, this could be a nice palate cleanser after the devastating events of Avengers: Infinity War. Read my full review here.

Skyscraper.
Director: Rawson Marshall Thurber.
Writer: Rawson Marshall Thurber.
Cast: Dwayne Johnson, Neve Campbell, Noah Taylor, McKenna Roberts.
Opens: Friday, July 13.
If anyone’s going to defy the laws of physics, saving his family and punching bad guys, it’s The Rock. While I don’t necessarily think the director of Dodgeball is the right person to handle this latest Die Hard knock-off, Dwayne Johnson has proven again and again that he can make even the most unoriginal material at least watchable, if not downright entertaining.

Mission: Impossible – Fallout.
Director: Christopher McQuarrie.
Writer: Christopher McQuarrie.
Cast: Tom Cruise, Rebecca Ferguson, Henry Cavill, Angela Bassett.
Opens: Friday, July 27.
Here we go! My most anticipated movie of the summer! There’s a strong case to be made that Mission: Impossible is the best franchise going right now. Tom Cruise first played Ethan Hunt more than 20 years ago, but he’s still kicking and breaking his body (literally) to perform his own stunts in what’s now the sixth installment in the franchise. This one adds Henry Cavill and Angela Bassett as CIA agents determined to bring Hunt in and dismantle the IMF. I wish we could have gotten this at Memorial Day instead of Solo.

Teen Titans Go! To the Movies.
Directors: Aaron Horvath, Peter Rida Michail.
Writers: Aaron Horvath, Michael Jelenic.
Cast: Kristen Bell, Nicolas Cage, Jimmy Kimmel, Will Arnett.
Opens: Friday, July 27.
I do not have kids, and I don’t watch this show regularly, but this looks like it’s in the hyper self-aware mold of The LEGO Batman Movie, which is one of my favorite movies of recent years. It gets special points for making digs at the disastrous DC Extended Universe. (Yes, Yawn of Justice is an easy joke. Yes, I still laughed.) So this looks like the best bet if you have to babysit your nephew or niece, or just want another lighter superhero movie.

Blindspotting.
Director: Carlos López Estrada.
Writers: Daveed Diggs, Rafael Casal.
Cast: Daveed Diggs, Rafael Casal, Janina Gavankar, Ethan Embry.
The more cohesive of two dramedies about racial identity in Oakland opening this month, this one stars Tony-winner Daveed Diggs (Hamilton) as a mover trying to live out his last few days of probation without incident. On his first of three nights, he witnesses a police officer (Ethan Embry) shoot and kill an unarmed black man, setting off an increasingly violent chain of events. Diggs co-wrote the film with his longtime friend Rafael Casal, and the film really makes the Bay Area feel lived in, away from the high-tech campuses and trendy tourist spots. It’s got a lot to say and a unique way of saying it. Don’t miss this one.

Don’t Worry, He Won’t Get Far on Foot.
Director: Gus Van Sant.
Writer: Gus Van Sant.
Cast: Joaquin Phoenix, Jonah Hill, Rooney Mara, Jack Black.
Based on a true story, Joaquin Phoenix gives another legendary performance as quadriplegic cartoonist John Callahan. The film relates his struggles both as a disabled person and as an addict. His co-stars include Jonah Hill and Jack Black as his ex-drinking buddies, and Rooney Mara as his love interest. Gus Van Sant (Good Will Hunting) is trying to make his first relevant movie in a decade, and I’m expecting to laugh at the gallows humor and to cry at the genuine emotion.

Sorry to Bother You.
Director: Boots Riley.
Writer: Boots Riley.
Cast: Lakeith Stanfield, Tessa Thompson, Steven Yeun, Armie Hammer.
Folks, you are not prepared for this one. Like a cross between Spike Lee and Richard Kelly, this debut feature from rapper Boots Riley is one of the wildest American movies I’ve ever seen. Lakeith Stanfield (Atlanta) stars as a struggling telemarketer who moves up to the big leagues when he starts using his “white voice.” That’s just scratching the surface of a movie that’s also about artistic integrity, labor organizing and the perils of capitalism. There are shades of 9 to 5, Idiocracy and, uh, The Island of Dr. Moreau here. It doesn’t always make sense, but it’s always going for it.

Whitney.
Director: Kevin Macdonald.
Last year’s Whitney: Can I Be Me? got strong reviews, but this is the more in-depth, warts-and-all documentary on one of the most astonishing voices of all time. Kevin Macdonald gets interviews with all the living family, including pushy mom Cissy Houston, troubled husband Bobby Brown and all the friends, family and enablers involved in the singer’s tragic downfall, while still focusing on what made her such a once-in-a-lifetime talent.

The Adventures of Buckaroo Banzai Across the 8th Dimension.
Director: W.D. Richter.
Writer: Earl Mac Rauch.
Cast: Peter Weller, John Lithgow, Ellen Barkin, Jeff Goldblum.
Playing At: Inwood Theatre.
Showing: Friday, July 6; Saturday, July 7.
The true definition of a cult classic, this ’80s sci-fi romp thought it was going to be an extended universe before that was even a thing. Destined to be rejected by a wide audience, the film starred Peter Weller as a doctor/pilot/rock star defending the planet from alien invaders. Featuring a murderer’s row of Reagan-era talent — including a wildly unhinged John Lithgow as the bad guy and Jeff Goldblum yee-hawing his way through it as a cowboy — this one’s got a very devoted fan base.

The Night of the Hunter.
Director: Charles Laughton.
Writer: James Agee.
Cast: Robert Mitchum, Shelley Winters, Lillian Gish, Peter Graves.
Playing At: The Magnolia.
Showing: Tuesday, July 10.
One of the best movies of all time, it’s a shame it’s the only directorial effort of British thespian Charles Laughton. Robert Mitchum gives his greatest performance as a con artist preacher, stalking the kids of his dead cellmate, determined to find the money he stashed before his capture. Brilliantly shot and paced, the film explores the dark underbelly of the South and how religion can be used as a tool for good and evil.

Dead Man.
Director: Jim Jarmusch.
Writer: Jim Jarmusch.
Cast: Johnny Depp, Gary Farmer, Lance Henriksen, John Hurt.
Playing At: Texas Theatre.
Showing: Saturday, July 14.
Back when Johnny Depp was an exciting actor (and not the self-indulgent dirtbag he is today), he starred in this Western from Jim Jarmusch. So that means a lot less gunplay and a lot more meandering and offbeat humor. Depp plays the hapless accountant who ends up on the lam after killing a jealous boyfriend in a shootout. The incredible cast also includes Billy Bob Thornton, Jared Harris, Alfred Molina, Gabriel Byrne and Iggy Pop. The new 4K restoration is the same one used for the gorgeous new release from Criterion.

Risky Business.
Director: Paul Brickman.
Writer: Paul Brickman.
Cast: Tom Cruise, Rebecca De Mornay, Joe Pantoliano, Bronson Pinchot.
Playing At: Alamo Drafthouse Lake Highlands.
Showing: Saturday, July 28.
Forget the iconic lip-sync to “Old Time Rock and Roll,” this iconic ’80s movie has a lot more on its mind than the teenage boys that serve as its protagonists. Tom Cruise launched into superstardom with this very R-rated comedy about an underachieving rich kid who collides with Chicago’s underworld when he meets a sex worker (Rebecca De Mornay, in classic femme fatale mode). It’s smarter and funnier than a lot of the films of its ilk.