Coming Attractions: Once Upon A Time In Hollywood, Midsommar & More. 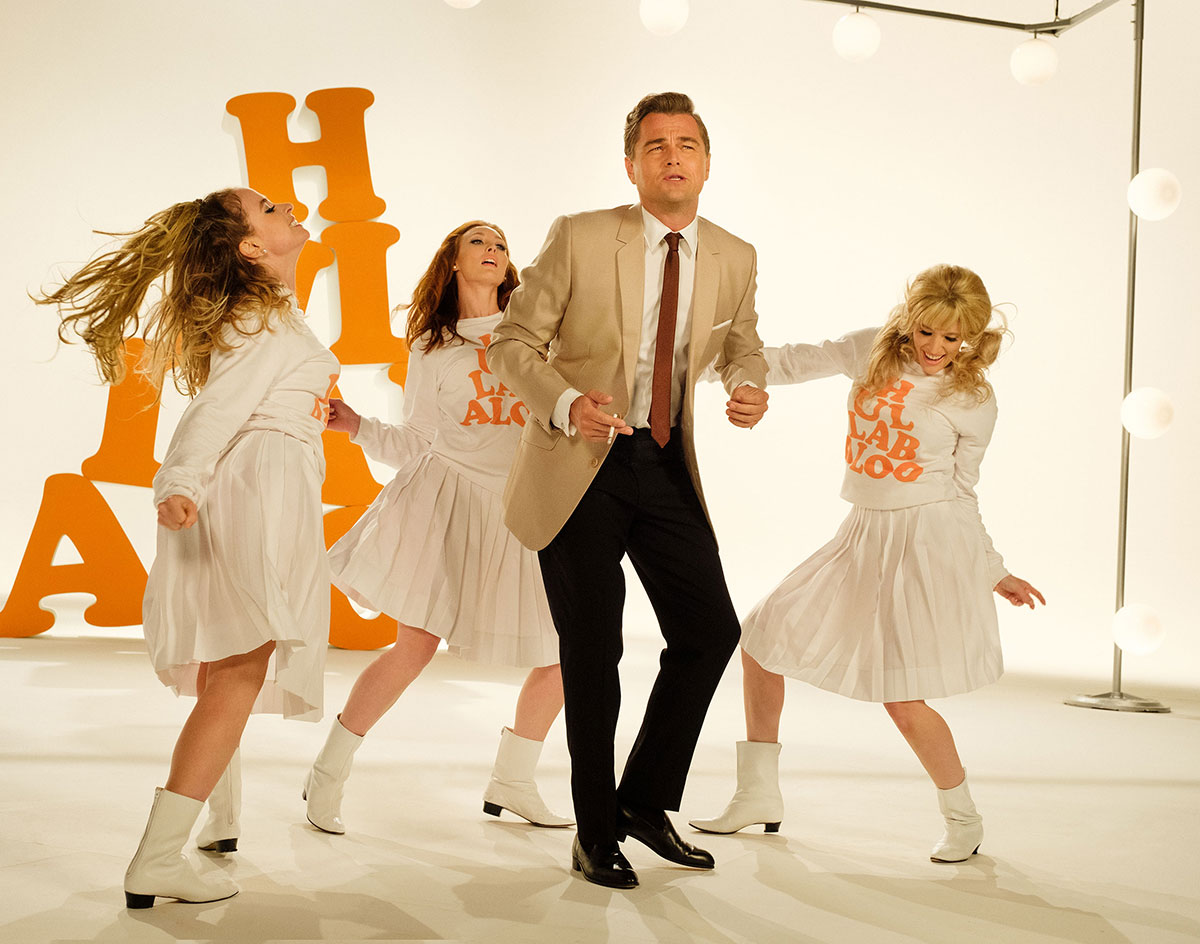 On Once Upon A Time In Hollywood, Midsommar, Spider-Man: Far From Home And The Rest Of July 2019’s Top New Releases, Limited Showings And Repertory Screenings Around Dallas.

Well, it sure feels like we’re just burning (sometimes literally, given the heat) through this summer at the movies, doesn’t it?

It’s probably not helping that new blockbusters just keep dropping like flies out there — or, well, the ones not made by Disney, anyway. Speaking of the House of Mouse: They’ve got yet another live-action remake due out this month, as The Lion King hits theaters on July 19.

But I’m putting my focus elsewhere this month. Yes, folks, there’s more interesting stuff out there than once again seeing Simba lose his dad, find himself and rise up to his rightful place atop Pride Rock. For instance? Well, there’s the latest film from Quentin Tarantino, a horror movie set in (gasp!) broad daylight and probably the biggest tearjerker of 2019, too.

On the repertory side, I’m also recommending at lease one super bleak option — but, hey, at least the others are lots of fun.

Without further ado, let’s take a look at what July has to offer us in theaters.

Spider-Man: Far from Home.
Director: Jon Watts.
Writers: Chris McKenna, Erik Sommers.
Cast: Tom Holland, Jake Gyllenhaal, Samuel L. Jackson, Zendaya.
Opens: Tuesday, July 2.
Folks, Homecoming was one of the best Spider-Man movies ever. I don’t even care that we’re on version 3.0 of Spider-Man, either. Tom Holland made Peter Parker feel like an actual teenager, and not a 30-year-old man playing a teenager. The last go also won me over because it featured a diverse cast and had a great villain in Michael Keaton’s Vulture. But that was two years ago! In this post-Endgame world, Peter has to adjust to the world he was disappeared from five years ago and fill the shoes of Iron Man, all while trying to just have some normalcy as a kid. Jake Gyllenhaal plays Mysterio, who’s long been a nemesis of Spider-Man, but here is a positioned as an ally. (I doubt their friendship will last long.)

Midsommar.
Director: Ari Aster.
Writer: Ari Aster.
Cast: Florence Pugh, Will Poulter, William Jackson Harper, Jack Reynor.
Opens: Wednesday, July 3.
Last year’s Hereditary was one of the most profoundly fucked-up movies of the year — a harrowing family drama that descended into full-out horror in its last act. Now, writer-director Ari Aster is back with another terrifying flick, this time moving the horror out of the shadows and into broad daylight. A group of obnoxious Westerners descends upon a small town for a festival that happens once every 90 years. Yes, of course this means multiple people are going to be sacrificed. But at more than two hours long, will watching this one be torture for the audience as well? I have confidence that it will be disturbing, at the very least.

Stuber.
Director: Michael Dowse.
Writer: Tripper Clancy.
Cast: Kumail Nanjiani, Dave Bautista, Betty Gilpin, Iko Uwais.
Opens: Friday, July 12.
Between standout work on Silicon Valley and in The Big Sick, Kumail Nanjiani has become one of our most prominent comedians of color. But the biggest surprise of recent times is how reliable a comic presence former wrestler Dave Bautista is. Here, they team up for this action-comedy, in which Nanjiani plays an Uber driver and Bautista plays an L.A. cop trying to bring down a ring of violent criminals. The film is obviously indebted to ’80s classics like Lethal Weapon and Beverly Hills Cop. But, honestly, if it’s anywhere near the ballpark of 22 Jump Street, I’ll be happy.

Once Upon a Time in Hollywood.
Director: Quentin Tarantino.
Writer: Quentin Tarantino.
Cast: Leonardo DiCaprio, Brad Pitt, Margot Robbie, Al Pacino.
Opens: Friday, July 26.
Tarantino’s first film since 2015’s The Hateful Eight is also my most anticipated movie of 2019. In this one, DiCaprio gives his first performance since winning an Oscar for The Revenant, playing a once-acclaimed actor stuck doing guest spots on bad TV shows. His best friend is his long-time stunt double (Brad Pitt), and his neighbors are Sharon Tate (Margot Robbie) and Roman Polanski (Rafal Zawierucha). Their lives all end up intersecting with Charles Manson (Damon Herriman) at some point, too, although I wouldn’t be surprised if this film doesn’t follow history. After all, we all saw with Inglorious Basterds, and its extremely violent end for Adolf Hitler.

The Art of Self-Defense.
Director: Riley Stearns.
Writer: Riley Stearns.
Cast: Jesse Eisenberg, Alessandro Nivola, Imogen Poots, Steve Terada.
If you thought people misunderstood Fight Club, wait until the discourse starts on this one. Jesse Eisenberg stars here as Casey, a timid office drone who survives a beating and signs up for a self-defense class to learn how to fight. But his shady instructor (Alessandro Nivola) unlocks his dark side, taking him to a more sinister place. It’s a dark comedy about toxic masculinity, but that will probably be lost on some folks.

At War.
Director: Stéphane Brizé.
Writers: Stéphane Brizé, Olivier Gorce.
Cast: Vincent Lindon, Mélanie Rover, Isabelle Rufin, Jean-Noel Tronc.
This French movie, which I’m sure no one in America can relate to, follows a group of factory workers who fight back against their evil bosses, who promise to keep their factory open after pay cuts but then close it down anyway, putting more than 1,000 people out of work. The film was nominated for Palme d’Or at last year’s Cannes Film Festival.

The Farewell.
Director: Lulu Wang.
Writer: Lulu Wang.
Cast: Awkwafina, Tzi Ma, Diana Lin, Gil Perez-Abraham.
Awkwafina was one of the comic breakouts of 2018, thanks to impressive turns in Ocean’s 8 and Crazy Rich Asians. Now, she’s ready to show off her dramatic side, and she’s doing it with this universally acclaimed tear-jerker. Here, she’s dealing with grandmother, who is terminally ill even though her family opts not to share the bad news her, instead using a big wedding as cover to see her one last time in better spirits. I’m definitely excited to see this, but not sure I’m emotionally prepared for it.

Maiden.
Director: Alex Holmes.
The Round the World competition used to be the globe’s premier sailing race. In 1989, Tracy Edwards just wanted to be a crew member — but, in a male-dominated sport, she was ignored. Instead of giving up, she captained an all-female crew, facing opposition the entire way. Expect an inspirational sports doc that doesn’t waste any time being cutesy or faux-empowering.

28 Days Later.
Director: Danny Boyle.
Writer: Alex Garland.
Cast: Cillian Murphy, Naomie Harris, Brendan Gleeson, Christopher Eccleston.
Playing At: Inwood Theatre.
Showing: Friday, July 5; Saturday, July 6.
I re-watched this recently and, holy shit, is it bleak. It also includes one of the most devastating character deaths ever. But it’s an exceptionally well-made movie — and so much more than its super-fast zombies. It’s a harrowing drama about survival, as our small band of travelers encounters one horror after the next. It’s another great movie from Oscar-winner Danny Boyle, who has consistently turned out some of the most fascinating films of the last 25 years.

UHF.
Director: Jay Levey.
Writers: “Weird Al” Yankovic, Jay Levey.
Cast: “Weird Al” Yankovic, Kevin McCarthy, Michael Richards, Fran Drescher.
Playing At: Alamo Drafthouse Lake Highlands.
Showing: Tuesday, July 9.
If you haven’t seen this cult classic, you’re probably not a “Weird Al” fan. But, if you are, you’ve probably seen it a lot. It’s certainly not what I would call a well-crafted comedy. Like the network programmer Al plays, this movie just throws everything at the wall and sees what sticks. But if you’re on its wavelength, you’ll be laughing from beginning to end. The film will make its way to other Alamo Drafthouses in the area throughout the month. Check Alamo’s websites for more dates and showtimes.

Uncle Buck.
Director: John Hughes.
Writer: John Hughes.
Cast: John Candy, Jean Louisa Kelly, Macaulay Culkin, Amy Madigan.
Playing At: Texas Theatre.
Showing: Saturday, July 13.
John Candy was one of my all-time favorite actors. It was a real shame he died so young, but I try to celebrate him whenever possible, and there’s no better way than with one of his greatest performances. Playing the titular role, he’s forced here to watch his nieces and nephew when his brother has to go out of town, and he’s absolutely hilarious and gentle, creating one of the most memorable characters of the ’80s.

A Night at the Opera.
Director: Sam Wood.
Writers: George S. Kaufman, Morrie Ryskind.
Cast: Groucho Marx, Chico Marx, Harpo Marx, Margaret Dumont.
Playing At: The Magnolia.
Showing: Tuesday, July 23.
It’s not the best Marx Brothers movie (that’s still Duck Soup), but it’s easily the second-best. Once again, there’s only the thinnest of plots – including an unnecessary romance between two opera singers – but the gags are top-notch. Sure, you can watch the stateroom scene on YouTube, but seeing it with a crowd being wowed by its brilliantly controlled chaos is much better.