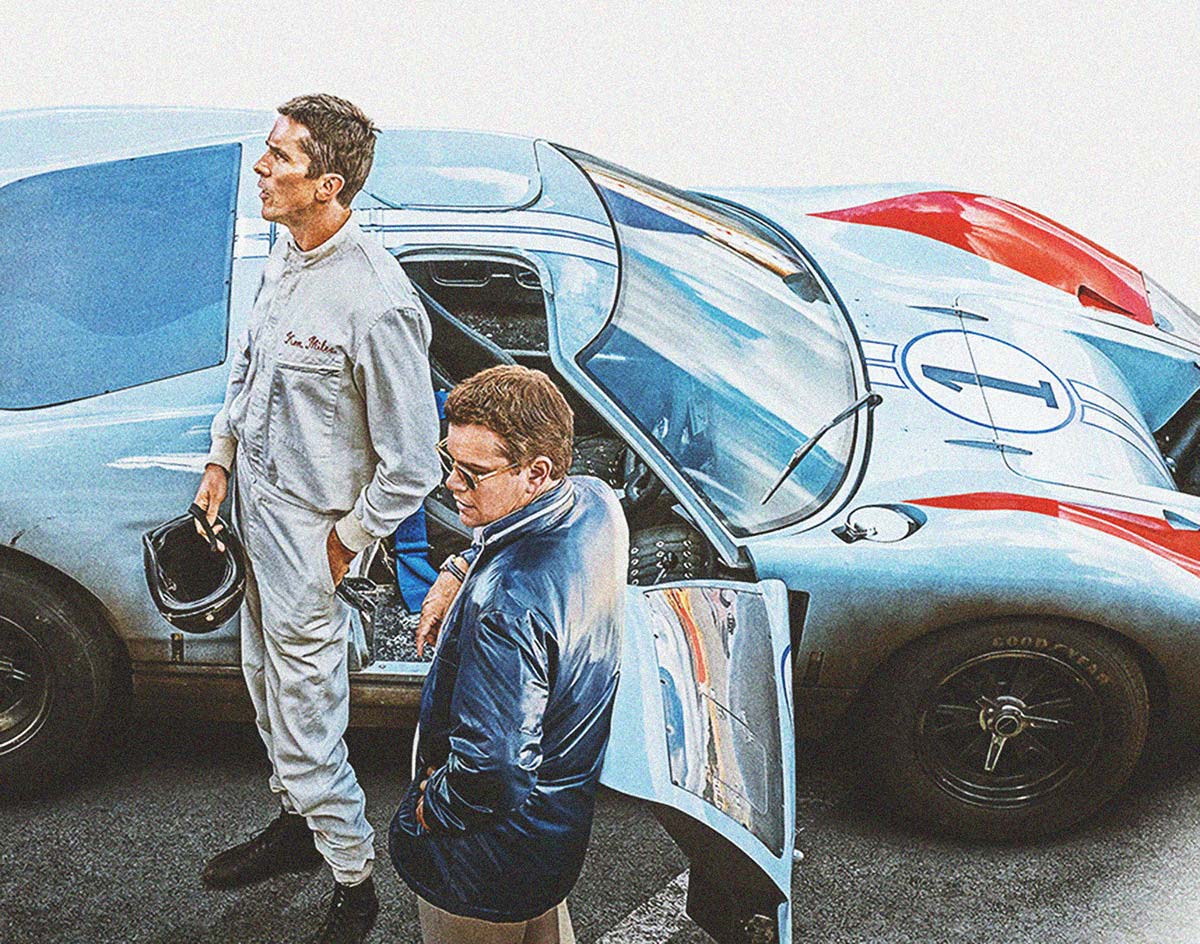 On Ford v Ferrari, Knives Out, A Beautiful Day In The Neighborhood And The Rest Of November 2019’s Top Film Options In And Around Dallas.

I don’t know why Hollywood decided to load up November with all the movies I wanted to see this year. But, fact is, this month offers an over-sized buffet of options — including the period mystery Motherless Brooklyn, the historical drama Harriet, a sequel to The Shining and a new Terminator movie.

November also offers up two worthwhile dramas for adults (The Good Liar and Dark Waters) and, well, also plenty of dreck (yet another version of Charlie’s Angels and a sequel for Frozen).

Beyond the above-mentioned offerings, let’s look into the the abundance of our most-hotly anticipated films for the month, which you just might want to camp out at the theater for during Thanksgiving.

Ford v Ferrari.
Director: James Mangold.
Writers: Jez Butterworth, John-Henry Butterworth, Jason Keller.
Cast: Christian Bale, Matt Damon, Catronia Balfe, Tracy Letts.
Opens: Friday, November 15.
If my grandfather were still alive, this would absolutely be the movie he’d be most jazzed about this fall. This is a big-budget crowd-pleaser with nary a cape or CGI special effect in sight. Damon plays Texan Carroll Shelby, the visionary car designer. Bale plays Ken Miles, his best friend. Together, they team up with Ford to take down Ferrari at the 1966 24 Hours of Le Mans race. Along with another film we’ll get to later, this should be one of the most entertaining movies of the year.

A Beautiful Day in the Neighborhood.
Director: Marielle Heller.
Writers: Micah Fitzerman-Blue, Noah Harpster.
Cast: Matthew Rhys, Tom Hanks, Susan Kelechi Watson, Christine Lahti.
Opens: Friday, November 22.
I hope you’ve loaded up on tissues — because you’re going to need them. Tom Hanks is about the only celebrity left with a 100 percent approval rating, and he plays the iconic beacon of kindness Mr. Rogers here. Matthew Rhys (The Americans) plays the jaded writer assigned to profile him. As with last year’s documentary Won’t You Be My Neighbor? on the same topic, we’re in dire need of some hope in humanity, so hopefully this gives us our much-needed outlet for that.

Knives Out.
Director: Rian Johnson.
Writer: Rian Johnson.
Cast: Daniel Craig, Chris Evans, Jamie Lee Curtis, Toni Collette.
Opens: Wednesday, November 27.
It’s been a while since we’ve had a really great whodunit, and Rian Johnson is incapable of making a bad movie. (Don’t @ me, The Last Jedi haters.) Christopher Plummer plays a wealthy crime fiction writer who dies under mysterious circumstances, with Daniel Craig investigating all his family members and employees. This is seriously one of the best ensemble casts ever assembled, and looks to be both hilarious and riveting.

Queen & Slim.
Director: Melina Matsoukas.
Writer: Lena Waithe.
Cast: Daniel Kaluuya, Jodie Turner-Smith, Bokeem Woodbine, Chloe Sevigny.
Opens: Wednesday, November 27.
This controversial drama is my most anticipated film of the fall. Melina Matsoukas (Beyoncé’s “Formation” video) makes her feature debut in this original story from Lena Waithe (The Chi). Daniel Kaluuya and newcomer Jodie Turner-Smith play a couple on their first date who find themselves on the run after a harrowing traffic stop leaves a racist cop dead. There are echoes of Bonnie & Clyde and Do the Right Thing here, which obviously gives the film a lot to live up to. It’s premiering pretty late in the game, which may hurt its Oscar chances, but this will likely be one of the most powerful films of the year.

The Irishman.
Director: Martin Scorsese.
Writer: Steven Zaillian.
Cast: Robert De Niro, Al Pacino, Joe Pesci, Anna Paquin.
It’s a little weird that one of the most anticipated movies of the year, by one of the greatest directors of all time, is only going to be in a handful of theaters. But that’s what happens when theater chains are terrified of Netflix, who gave Scorsese $200 million (give or take) to make this adaptation of I Heard You Paint Houses, about an Irish fixer for the mob. Using de-aging technology, the 76-year-old De Niro, 79-year-old Pacino and 76-year-old Pesci all play their characters over the decades in a sprawling epic that’s more than three hours long. I will be holding off on the large soda and treating this with more reverence than Avengers: Endgame.

Marriage Story.
Director: Noah Baumbach.
Writer: Noah Baumbach.
Cast: Adam Driver, Scarlett Johansson, Alan Alda, Laura Dern.
Baumbach started off his career with slacker Gen X comedies, then kicked off this decade with one of my most hated movies (Greenberg). But he’s since rebounded with his professional relationship with Greta Gerwig. His romantic partnership with her – and the unraveling of his marriage to Jennifer Jason Leigh – serves as the inspiration for this film. Critics who have seen it at the many festivals it’s played at have compared it to Kramer vs. Kramer, which dominated the Oscars 40 years ago. This film may do the same.

The Report.
Director: Scott Z. Burns.
Writer: Scott Z. Burns.
Cast: Adam Driver, Annette Bening, Jon Hamm, Corey Stoll.
You get a double dose of Adam Driver this month, which is a beautiful thing. This one is more explicitly a true story, based on Daniel Jones and the Senate Intelligence Committee’s efforts to investigate and uncover the CIA’s torture program. Amazon will move quickly to get it in front of as many eyeballs as possible, as it will hit their Prime Video streaming service just two weeks after the film hits theaters.

Waves.
Director: Trey Edward Shults.
Writer: Trey Edward Shults.
Cast: Kelvin Harrison Jr, Sterling K. Brown, Lucas Hedges, Taylor Russell.
Waves is one of the most beautiful and heartbreaking movies I’ve seen all year. Without spoiling anything, it’s about an African-American family and how they try to cope after a violent, traumatic incident. It’s raw, powerful filmmaking and features the best work yet from Sterling K. Brown, who’s already one of the best actors working today.

Rosemary’s Baby.
Director: Roman Polanski.
Writer: Roman Polanski.
Cast: Mia Farrow, John Cassavetes, Ruth Gordon, Sidney Blackmer.
Playing At: Inwood Theatre.
Showing: Friday, November 1; Saturday, November 2.
Halloween may be over, but that doesn’t mean you can’t still get the shit scared out of you. This is one of the most chilling movies ever made, mostly because it’s about the horror of no one believing you. Ruth Gordon won an Oscar for playing the deceptively kind neighbor, and it’s one of my favorite performances ever. But it’s John Cassavetes as Rosemary’s shitty husband that’s stuck with me.

A Face in the Crowd.
Director: Elia Kazan.
Writer: Budd Schulberg.
Cast: Andy Griffith, Patricia Neal, Walter Matthau, Lee Remick.
Playing At: Alamo Drafthouse Lake Highlands.
Showing: Sunday, November 3.
Most people know Andy Griffith as a beacon of common sense from his many years on The Andy Griffith Show and Matlock. But my guy had range! Look no further than his breakthrough role here as Lonesome Rhodes, a nobody who becomes a massive media sensation, turning his celebrity toward a political future to grow his brand, portraying himself as a “man of the people” while being a rich asshole in private. Sound familiar? Be sure to check the Alamo Drafthouse website, as the film will play at other locations throughout the month.

Godzillathon.
Director: Ishiro Honda
Writers: Ishiro Honda, Takeo Murata, Shin’ichi Sekizawa, Kaoru Mabuchi.
Cast: Godzilla, Mothra, Rodan, Ghidorah.
Playing At: Texas Theatre.
Showing: Sunday, November 3.
It’s the 65th anniversary of the original Godzilla film, and while you may not be able to afford that massive box set from the Criterion Collection, you can absolutely enjoy a mini-history on the franchise in one afternoon at the Texas Theatre. They’ll be showing Godzilla, Mothra vs. Godzilla and Destroy All Monsters, and you’ll get to see Gojira move from symbol of nuclear fallout terror to the defender of Japan from even more fearsome creatures.

What’s Up, Doc?
Director: Peter Bogdanovich.
Writers: Buck Henry, David Newman, Robert Benton.
Cast: Ryan O’Neal, Barbra Streisand, Madeline Kahn,
Playing At: The Magnolia.
Showing: Tuesday, November 5.
Comedy is subjective, but believe me when I say this is one of the funniest movies ever made. Peter Bogdanovich’s tribute to screwball comedies and Looney Tunes has a non-stop madcap energy that propels it through 90 hilarious minutes. Ryan O’Neal plays an uptight professor with an even more uptight fiancée (the glorious Madeline Kahn). His life is turned upside down by Judy (Barbra Streisand) in a proto-Manic Pixie Dream Girl role. There’s some nonsense about mistaken identity and stolen documents, but they’re all just fuel for the comic brilliance, including one of the best car chases of all time.