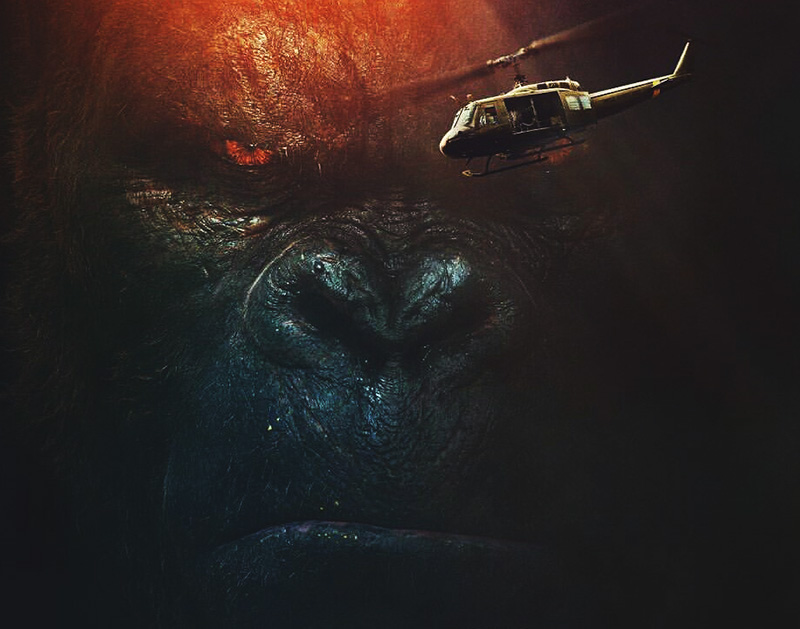 On Kong: Skull Island, Beauty and the Beast And The Rest Of March 2017’s Film Releases.

Once again, I’m kind of astonished at how many good-looking movies we’re getting this month. I can already tell you that Logan lives up to the hype, and hopefully the other big movies do too.

If you’re needing a break from mainstream fare, there are a lot of European imports at the arthouse theaters this month, too. And two of the greatest movies ever shot in Texas will have special screenings as well.

So let’s look at what you’ll be seeing this month!

Kong: Skull Island.
Director: Jordan Vogt-Roberts.
Writers: Dan Gilroy, Max Borenstein, Derek Connolly.
Cast: Tom Hiddleston, Brie Larson, Samuel L. Jackson, John C. Reilly.
Opens: Friday, March 10.
It’s only been 12 years since our last King Kong movie, and we probably didn’t need another one. But if we’re going to get one, at least we’re getting one that looks this much fun. (This was one of the reasons the Godzilla remake didn’t work for me.) And damn, just look at that cast! Plus, director Jordan Vogt-Roberts knows how to make you care about the characters, even when they’re doing shitty things. Check out his underrated Kings of Summer, which is one of my favorite comedies of recent years.

Beauty and the Beast.
Director: Bill Condon.
Writers: Stephen Chbosky, Evan Spiliotopoulos.
Cast: Dan Stevens, Emma Watson, Luke Evans, Kevin Kline.
Opens: Friday, March 17.
Disney will never stop remaking their animated classics, so we can at least hope they do justice to them. With this one, it looks like they’ve spared no expense, even if CGI candlesticks and clocks look real stupid. But director Bill Condon knows his way around gorgeous musicals, having adapted Chicago and directed Dreamgirls. And you can go ahead and mark the film down for production design and costume design Oscars while you’re at it.

Life
Director: Daniel Espinosa.
Writers: Rhett Reese, Paul Wernick.
Cast: Rebecca Ferguson, Jake Gyllenhaal, Ryan Reynolds, Ariyon Bakare.
Opens: Friday, March 24.
Not to be confused with the Eddie Murphy-Martin Lawrence comedy of the same name, but easy to be confused with Alien or Event Horizon, this is another shit-goes-wrong-in-outer-space thriller. Writers Rhett Reese and Paul Wernick hit it out of the park with Zombieland and Deadpool, but how can they handle horror? Remains to be seen, but I’m willing to give them a shot.

A note about limited releases: Unlike the big movies, which are booked months or years in advance, these don’t make it to Dallas on a regular schedule. It’s all up to the distributors and the theaters, which are usually independent. Check out the websites for both Angelikas (Dallas and Plano), both Drafthouses, the Magnolia and the Texas Theatre throughout the month to see what’s showing where.

Raw.
Director: Julia Ducournau.
Writer: Julia Ducournau.
Cast: Garance Miller, Ella Rumpf, Rabah Nait Oufella, Bouli Lanners.
Hope you’ve got a strong stomach, because Raw is the cannibalism freak show you’ve been waiting for — if you’re the kind of person who waits for those things. Garance Miller plays Justine, a vegetarian who’s forced to eat meat during a hazing ritual. But now that she’s got a taste for flesh, she’s unsatisfied with animals and starts sizing up her classmates for dinner.

Wilson.
Director: Craig Johnson.
Writer: Daniel Clowes.
Cast: Woody Harrelson, Mary Lynn Rajskub, Judy Greer, Brett Gelman.
Somewhere in the last decade, Woody Harrelson became one of my favorite actors on earth. Here, he plays the title role in this adaptation of Daniel Clowes’ graphic novel. He’s a misanthrope who finds himself drawn to reconnect with the teenage daughter his wife gave up for adoption after their divorce. While that synopsis makes it sound like something super-cheesy, Clowes is far more acerbic than that, which anyone who’s seen Ghost World can tell you.

Matinee.
Director: Joe Dante.
Writer: Charlies Haas.
Cast: John Goodman, Cathy Moriarty, Lisa Jakub, Robert Picardo.
Playing At: Alamo Drafthouse Richardson.
Showing: Sunday, March 5.
One of the most underrated films of the ’90s, Matinee follows a movie producer of questionable ethics (John Goodman) as he tries to capitalize on the Cuban Missile Crisis to get butts into seats for his new sci-fi trash heap, Mant!, which, of course, is about a guy who’s half-man, half-ant. It’s an absurd but loving homage to William Castle’s ridiculous films, but also to a bygone era when going to the movies was a more communal experience. A portion of the proceeds from this showing goes to Martin Scorsese’s Film Foundation, which helps preserve archival prints of movies.

Bonnie and Clyde.
Director: Arthur Penn.
Writers: David Newman, Robert Benton.
Cast: Warren Beatty, Faye Dunaway, Gene Hackman, Estelle Parsons.
Playing At: Majestic Theatre.
Showing: Sunday, March 12.
A half-century before they completely fucked up the announcement of Best Picture at the Oscars, Faye Dunaway and Warren Beatty played Texas’ most famous outlaws in a movie that caused a lot of controversy for its graphic – at the time, anyway – violence. It’s since been regarded as a masterpiece and one of the most important films of the one of the most important eras in film history.

The Last Picture Show.
Director: Peter Bogdanovich.
Writer: Peter Bogdanovich, Larry McMurtry.
Cast: Timothy Bottoms, Jeff Bridges, Cybil Shepherd, Ben Johnson.
Playing At: Texas Theatre.
Showing: Sunday, March 26.
Another Texas legend, The Last Picture Show is a tragic but often hilarious story about growing up in a nowhere Texas town in the ’50s. The cast is terrific top to bottom, including Ben Johnson and Cloris Leachman, who both won Oscars as the world-weary older generation who care about the young leads but still end up hurt by their selfishness. It’s really one of the greatest movies ever made.