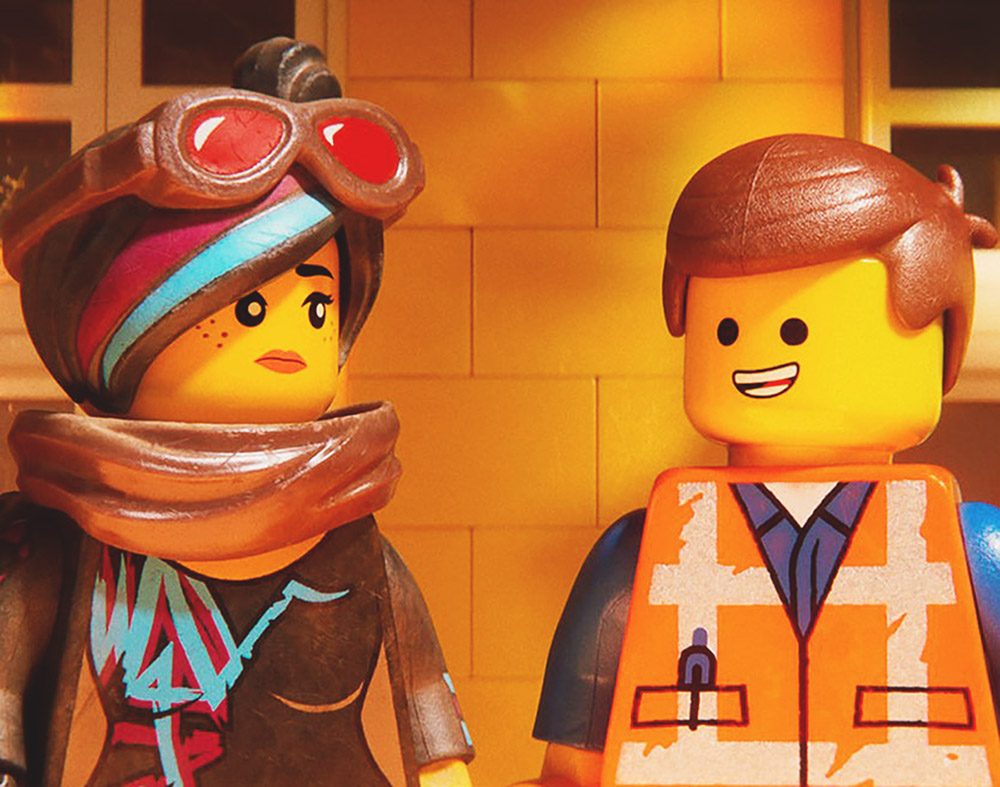 On The LEGO Movie 2, Isn’t It Romantic And The Rest Of February 2019’s Top New Releases, Limited Showings and Repertory Screenings Around Dallas.

I’m not sure what it says about the state of cinema that the two most interesting movies of February — Dan Gilroy’s horror-comedy Velvet Buzzsaw and Steven Soderbergh’s behind-the-scenes NBA drama High Flying Bird — are going straight to Netflix, but it’s probably not an especially great sign as the future of visiting movie theaters goes.

Still, there are a handful of films worth trekking out to see local cinemas this month — including a couple of animated sequels, a stunning documentary and a Colombian movie that got straight shafted at the Oscars.

Plus, on the repertory front, there are two classics from legendary directors (Hitchcock and Wilder), Jackie Chan’s big breakthrough and one of the touchstones of black queer cinema.

Let’s dive in, shall we?

Miss Bala.
Director: Catherine Hardwicke.
Writer: Gareth Dunnet-Alcocer.
Cast: Gina Rodriguez, Anthony Mackie, Matt Lauria, Ismael Cruz Cordova.
Opens: Friday, February 1.
I’m not sure exactly why we needed an English-language remake of this Mexican thriller, but I love Gina Rodriguez (Jane the Virgin), Anthony Mackie (Avengers: Infinity War) and Matt Lauria (Friday Night Lights), so I’m willing to give it a shot. Plus, a la Charlie Brown waiting to kick the football, I keep holding out hope that Catherine Hardwicke will once again display the promise she showed with her debut feature, Thirteen. Here, Rodriguez plays a former beauty queen forced to work for the cartel when her friend is kidnapped in Mexico. There’s no real need to prove she’s a badass, but hopefully this film can do that even with its PG-13 rating.

Cold Pursuit.
Director: Hans Petter Moland.
Writer: Frank Baldwin.
Cast: Liam Neeson, Laura Dern, Emmy Rossum, John Doman.
Opens: Friday, February 8.
The early winter months are perfect for movies about Liam Neeson getting his revenge. No, they’re not all winners, but they can be a reliable source of entertainment when there’s nothing much else going on at the multiplex. This looks like it could be in the upper tier of these movies, though! A remake of the Swedish thriller In Order of Disappearance, Neeson plays a snow-plow driver here who is out to kill the men who murdered his son. There seems to be a lot of winking going on, though, with Neeson’s character not being that great at the whole killing bit.

The LEGO Movie 2: The Second Part.
Director: Mike Mitchell.
Writers: Phil Lord, Chris Miller, Matthew Fogel, Raphael Bob-Waksberg.
Cast: Chris Pratt, Elizabeth Banks, Will Arnett, Tiffany Haddish.
Opens: Friday, February 8.
The sequel to one of the most delightful movies of the last decade is at least partially a parody of Mad Max: Fury Road, and it also has Chris Pratt tweaking his own image? That’s all I need to know. I could not be more in.

Isn’t It Romantic.
Director: Todd Strauss-Schulson.
Writers: Erin Cardillo, Dana Fox, Katie Silberman.
Cast: Rebel Wilson, Priyanka Chopra, Liam Hemsworth, Adam Devine.
Opens: Wednesday, February 13.
This probably won’t be as strong a takedown of romantic comedy clichés as They Came Together, but this still looks like a total delight. Here, Rebel Wilson awakes from a nasty bump on the head to find herself in a world that follows that absurd logic of rom-coms, where everyone is a perfect 10 and she has a stereotypical “gay best friend who set gay rights back 100 years.” It’s long been time for Wilson to start being given the lead role in studio comedies. Hopefully this is a great, hilarious beginning.

Birds of Passage.
Directors: Cristina Gallego, Ciro Guerra.
Writers: Maria Camila Arias, Jacques Toulemonde Vidal.
Cast: Carmina Martinez, Jose Acosta, Natalia Reyes, Juan Bautista Martinez.
This gangster film from Colombia was short-listed for Best Foreign Language Film at the Oscars but didn’t make the final five nominees. Having just seen this at Sundance, I can tell you that the Oscars done fucked up. This is an engaging film that’s less about indulging in the excesses of the drug trade, and more about the families it tore apart. Its story might be familiar, but the details and the way it’s told are unlike any you’ve seen before. The costumes and music are especially well done, too.

Fighting with My Family.
Director: Stephen Merchant.
Writer: Stephen Merchant.
Cast: Florence Pugh, Jack Lowden, Lena Headey, Nick Frost.
I’ve never been into wrestling, but I am very much into whatever Stephen Merchant (the original British Office) is doing. In his solo debut as writer-director, the gawky Brit tells a fictionalized version of WWE star Paige, who came from working-class Norfolk, England, to become one of the biggest names in wrestling. Merchant is sure to make this a crowd-pleaser with a superb wit, whether the audience members are even fans of professional wrestling.

Never Look Away.
Director: Florian Henckel von Donnersmarck.
Writer: Florian Henckel von Donnersmarck.
Cast: Tom Schilling, Sebastian Koch, Paula Beer, Saskia Rosendahl.
A surprise double-nominee at this year’s Oscars – for Foreign Language Film and Cinematography – this is another heart-wrenching World War II story. Here, Tom Schilling plays a painter who falls in love with a fellow art student. Their relationship gets complicated when her father rises through the ranks of Nazi high command. As he’s forced to reckon with his past in later years, his art takes on a richer meaning. I wouldn’t be surprised if this is one of the year’s best movies — but pack some tissues and order the small drink instead of the large, as this thing’s three hours and eight minutes long.

They Shall Not Grow Old.
Director: Peter Jackson.
Peter Jackson’s World War I documentary has already been screened a few times in special one-off screenings, but it’s now finally getting a full release from Warner Bros. — and duly so. The footage of British soldiers has been restored, colorized and converted to 3-D, and the whole thing makes for an extremely immersive experience, putting less distance between us and events that happened more than 100 years ago while taking a look at the men who sacrificed everything for each other, even if the conflict they found themselves in didn’t make much sense.

Vertigo.
Director: Alfred Hitchcock.
Writers: Alec Coppel, Samuel A. Taylor.
Cast: Jimmy Stewart, Kim Novak, Barbara Bel Geddes, Tom Helmore.
Playing At: Inwood Theatre.
Showing: Friday, February 8; Saturday, February 9.
This has never been my favorite Hitchcock, but it’s one of the best movies ever made about obsession. In it, Jimmy Stewart plays a detective obsessed with a woman who looks like another woman — one he couldn’t save. It’s a twisted game, for sure. It’s also still hard to see Jimmy Stewart play such a creep. It’s like seeing Tom Hanks as a cold-blooded murderer. But, as is true with most great directors, even their prickliest movies have a lot to admire.

The Watermelon Woman.
Director: Cheryl Dunye.
Writer: Cheryl Dunye.
Cast: Cheryl Dunye, Guinevere Turner, Valarie Walker, Lisa Marie Bronson.
Playing At: Texas Theatre.
Showing: Friday, February 22.
A landmark in black queer cinema, this 1996 romantic comedy was the first film ever directed by an African-American lesbian. Cheryl Dunye writes, directs and stars here as Cheryl, who spends her days working at a video store (remember those?!?!) and her nights working on a film about an African-American actress from the 1930s. There’s almost no production value to speak of, but the restored film does have real authenticity.

Sabrina.
Director: Billy Wilder.
Writers: Billy Wilder, Samuel A. Taylor, Ernest Lehman.
Cast: Humphrey Bogart, Audrey Hepburn, William Holden, Walter Hampden.
Playing At: The Magnolia.
Showing: Tuesday, February 26.
One of the black-and-white movies that got me into classic film as a kid, this romantic comedy is an all-timer. Humphrey Bogart and William Holden play wealthy brothers are both in love with the young and lively Sabrina (Audrey Hepburn). Billy Wilder was so great a director that he could crank out films like these in his sleep, but this was one of his many that was crafted with actual care. And it shows.