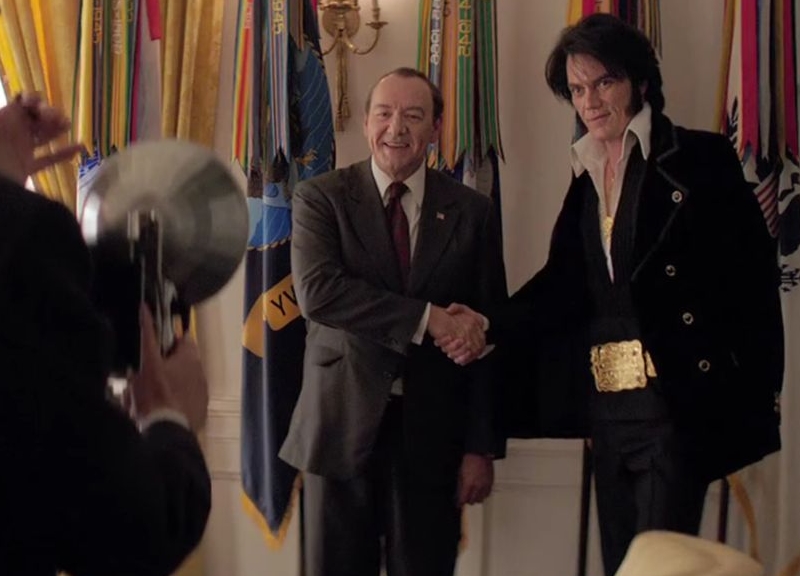 The Huntsman: Winter's War.
Director: Cedric Nicolas-Troyan.
Writers: Evan Siliotopoulos, Craig Mazin.
Cast: Chris Hemsworth, Charlize Theron, Jessica Chastain, Emily Blunt.
Playing At: Wide.
It's incredibly strange that I love this cast (especially Jessica Chastain) yet I have absolutely no desire to see this. That's probably because this is a prequel to Snow White and the Huntsman, which also featured pre-renaissance Kristen Stewart as Snow White, and represented effects-driven movies at their worst. It also looks like a live-action Frozen, to whose charms I was completely immune. While the two queens (Charlize Theron and Emily Blunt) do battle, I'll be dozing off.

Elvis & Nixon.
Director: Liza Johnson.
Writers: Joey Sagal, Hanala Sagal, Cary Elwes.
Cast: Michael Shannon, Kevin Spacey, Alex Pettyfer, Johnny Knoxville.
Playing At: Wide.
If you're looking for broad comedy and actors chewing on every available piece of scenery, this is your movie. Michael Shannon plays Elvis Presley as a gun-toting, karate-chopping anti-drug crusader. Kevin Spacey plays Richard Nixon as a more eccentric and less paranoid commander-in-chief. This is the totally fictionalized account of what happened on the day one of the most famous photos in U.S. history was taken, all played for laughs.

A Hologram for the King.
Director: Tom Tykwer.
Writer: Tom Tykwer.
Cast: Tom Hanks, Ben Whishaw, Tom Skerritt, Sarita Choudhury.
Playing At: Wide.
Wildly unheralded for a Tom Hanks movie, this Dave Eggers adaptation could be another knockout for America's greatest living movie star, or another ambitious misfire from director Tom Tykwer. I'm hoping for the former since I'm a big fan of star, director and source material. Hanks plays a dissatisfied American businessman who travels to Saudi Arabia to try to sell an invention to the king. There's big money in store, but also grappling with dealing with a country who may be our ally, but still regularly performs mass executions and oppresses just about everyone. There's limitless potential here, so I hope Tykwer pulls it off.

I Knew Her Well.
Director: Antonio Pietrangeli.
Writers: Antonio Pietrangeli, Ruggero Maccari, Ettore Scola.
Cast: Stefania Sandrelli, Mario Ador, Jean-Claude Brialy, Nino Manfredi.
Playing At: Texas Theatre.
This Italian comedy made waves when it opened in Europe in 1965, but went largely ignored in the U.S. Now it's playing in a 4K restoration as part of the Criterion Collection, which released it on Blu-ray for the first time back in February. If your frame of reference for Italian cinema begins and ends with Fellini, now's the time to check out another master.

Lucy.
Director: Luc Besson.
Writer: Luc Besson.
Cast: Scarlett Johansson, Morgan Freeman, Min-sik Choi, Amr Waked.
Playing At: Inwood Theatre.
It's both too early and inaccurate to establish this as a cult film, especially since it made nearly half a billion dollars worldwide. But unlike a lot of recent blockbusters, it actually does work quite well as a midnight movie. That's because, despite dealing with some (literally) cerebral themes, it never loses its sense of fun. Thank French director Luc Besson (The Fifth Element, The Professional) for that.