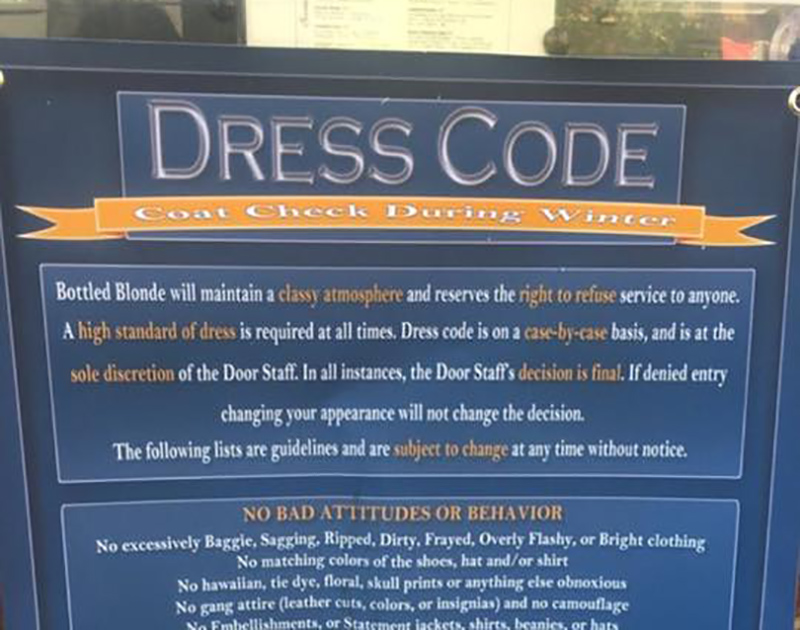 After An Image Of An Over-The-Top Dress Code At Bottled Blonde’s Other Locations Went Viral, Dallas Social Media Went Nuts. But There’s More To The Story.

That much was made abundantly clear this week after the recently opened pizza-parlor-cum-sports-bar Bottled Blonde on Good-Latimer Expressway began catching flack on social media because of a photo detailing a dress code that the chain’s Chicago location has been criticized of enforcing.

That fury was fairly deserved, for sure: The image, which has been shared seemingly endlessly on Facebook over these last few days, is curiously specific in the detailing the spot’s dress code rules, which, for instance, explicitly says that it allows patrons to wear Vans but not Jordans. 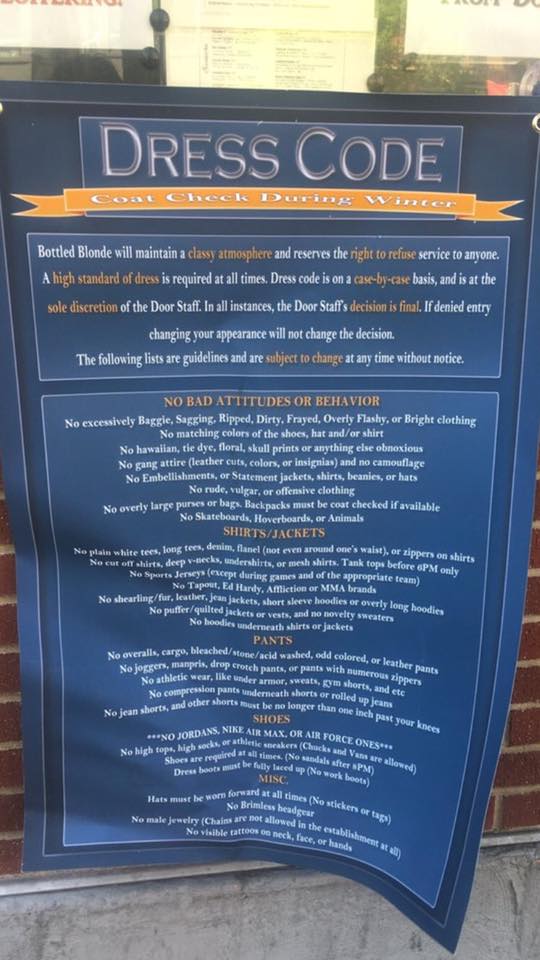 If the initial poster of the image here in Dallas was looking to stir up some shit about the new spot, well, that effort worked. Immediately, others began sharing that same image, claiming that the list represented a concerted (if slightly coded) effort on the part of Bottle Blonde to keep out minorities much in the same way that Kung Fu Saloon was accused of doing — and later punished for — here in Dallas a few years back.

In those folks’ defense, the Chicago location of Bottled Blonde — from where this image allegedly originates — indeed came under public fire earlier this year after it was accused of turning away black patrons under the guise of a strict dress code. The chain was also called out after it posted photos on Instagram account of groups of all-white people at the restaurant wearing clothes that violated its stated dress code.

But in Bottled Blonde’s defense, it’s worth noting that, despite posts implying it to be the case, this image definitely did not stem from its new Dallas spot.

Furthermore, a Bottled Blonde representative who asked that her name not be used for this story stressed to us that the chain’s national headquarters never approved of a dress code like the one detailed in that now-infamous photo and that it reprimanded its Chicago team for its handling of customers’ concerns surrounding it. She also added that she was under the impression that the Dallas location had no plans at this time to enforce any dress code at all.

Not enforcing any dress code would represent a marked shift in protocol for the company, which still enforces some version of an approved clothing list at its Chicago and at its flagship location Scottsdale, Arizona. But, during a visit to the new Dallas establishment earlier this week, we found no dress code posted on the premises and we’ve yet to find any mention of a dress code on the web site for Bottled Blonde’s location in Dallas — either of which would be required of the spot if it wanted to enforce one, per the precedent set by the Kung Fu Saloon situation.

Still, actions speak louder than words and we’ll be keeping an eye on Bottled Blonde to see if it backslides into adopting the same policies it has put in place at its other locations. To that end, if you or a friend are rejected at the door at Bottled Blonde in Dallas because of concerns over clothing, we ask that you do what you can to document the situation and tell us about your experience.