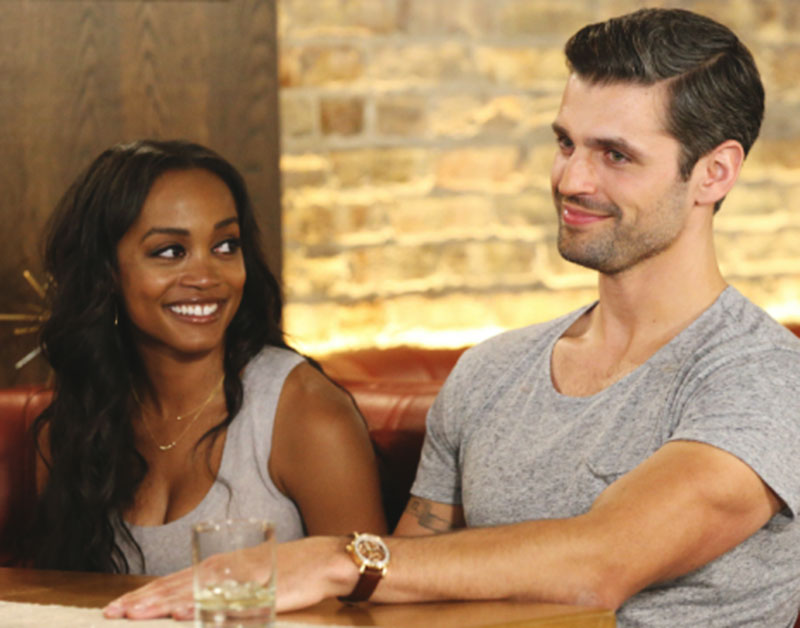 This Week On The Bachelorette, Rachel Gets Up All In The Family Business Of Her Four Remaining Beaus And It’s Super Awkward.

This week, Rachel has hometown dates with her four remaining beaus: Eric, Bryan, Peter, and Dean.

These dates range from fun and exciting to the emotional and awkward. And I’m OK with that because I honestly don’t remember a more diverse set of hometown dates from earlier seasons.

First up is Eric. He shows Rachel his humble upbringings before introducing her to his energetic family, with whom Rachel fit right in. She enjoys herself but has reservations about Eric because she’s the first girl he’s ever brought home and says he’s never been in love before. This isn’t quite a deal breaker, but it’s enough to make you go “hmmmmm.”

From there, Rachel heads off Bryan’s hometown where she meets his very, um, involved mother. At one point, Bryan’s mom starts crying while talking about her son — not because she’s happy that he’s possibly found The One, but because she seems legit sad that he might get married at the end of this. She tells Rachel that if she breaks her son’s heart, she’ll kill her. Rachel laughs at this and mom chuckles it off, but there’s some scary truth in that statement.

Then, it’s off to get to know Peter’s family. His family is great! Peter plays with his niece and nephew, showing Rachel how great of a dad he could be. But he’s still a little closed off and not sure if he’s about to get down on one knee at the end of this. That makes Rachel nervous! She wants a husband, not a boyfriend.

Finally, the crew goes to Dean’s hometown. And, hoo boy, this trip is so awkward! Multiple family members cry, and Dean just looks as if he’s hating every second of it. There’s some backstory here: After Dean’s mom passed away when he was 15, Dean’s father wasn’t really there for the family; he obviously didn’t take his wife’s death well, and he didn’t know how to keep the family unit together, so the family grew apart. These days, Dean’s dad is now a converted Sikh, he’s remarried and he’s a different man than who raised Dean. Oh, and get this: Rachel’s hometown visit marks the first time the family has been under one roof in eight years! Dean and his dad also get a chance to talk one-on-one at one point, but it doesn’t end up very well. (More on that later.)

Now, onto the numbers!

Cries: 4. Rachel is upset when she lets Dean go at the end of the episode. Bryan’s mom cries about the possibility of her son being engaged to Rachel. Both Dean’s dad and his sister cry about various family things during Dean’s hometown date.

Exes Mentioned: 1. Rachel asks about Bryan’s ex-girlfriend and finds out that, apparently, the ex and his mother didn’t get along, which led to their breakup.

Confrontations: 1. Dean confronts his father about not being there for the family after his mother died. His dad at first denies this but then admits that he struggled with her death and didn’t know how to be both a mother and a father to his kids. Both sides are understandable, and clearly this family is still hurting. I’m not sure if airing the family’s dirty laundry on national TV is the best decision — other contestants’ families have opted out of hometown dates in the past because they were not comfortable being on TV — but, hey, it’s not my life. Anyway, Dean’s hometown date just feels wholly weird and uncomfortable.

So, Dean gets let go at the rose ceremony. Which, well, we could’ve told you before this episode and even without the uncomfortable hometown. Rachel has stronger connections with the other three men, and Bryan still looks like the front-runner to us.

Next week, it’s time for overnight dates — and, according to the previews, it looks like the three final guys will all get the meet Rachel’s family. We’re in the homestretch, folks!