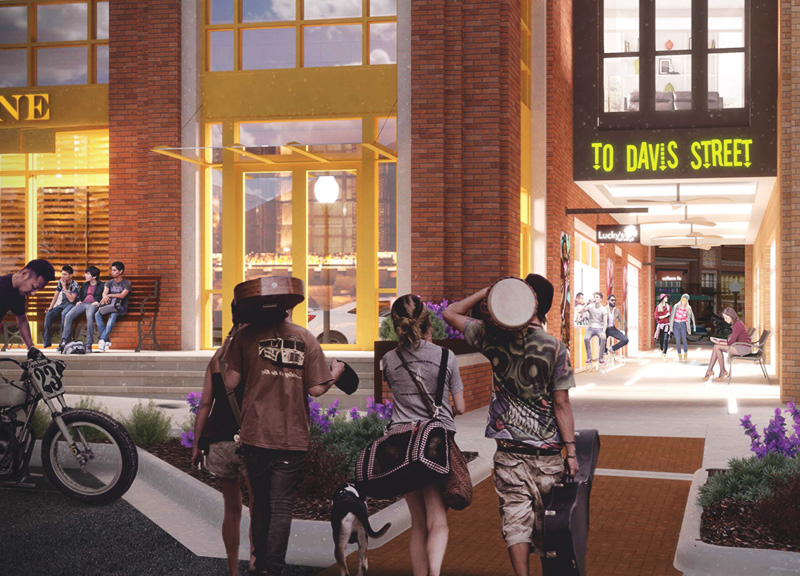 At This Point, The Bishop Arts Gateway Project Looks Inevitable For Oak Cliff.

Much has been made locally of late about old neighborhoods getting new face lifts — especially in Deep Ellum and Bishop Arts.

Yeah, gentrification’s a tricky, oft-controversial subject, but it’s one that’ll likely never go away so long as there’s money in it for developers.

And it seems there’s indeed money to be had: In an upcoming February 24 meeting, Dallas city council will vote on whether the development company Alamo Manhattan deserves $11.25 million in tax reimbursement — money that’s comes directly out of taxpayer’s pockets — to subsidize its planned $57 million mixed-use complex construction at the corner of Zang Boulevard and West Davis Street in Oak Cliff. The development is being dubbed “The Bishop Arts Gateway,” which sounds innocent enough, yet is anything but.

Dallas council members were pretty smitten with Alamo Manhattan’s initial proposal, which includes a streetcar plaza, over 25,000 square feet of commercial space and 209 living units, 42 of those units will meet affordable housing standards. Those who live and work closer to the development are less thrilled.

For starters, last July, there was a Change.org petition penned by Oak Cliff resident Laura Allen that asked for the city council to stop Alamo Manhattan because their plans “are not consistent with the neighborhood’s vibe, and would be completely out of character, with real potential to squelch the beautiful, organic growth of a neighborhood that has happened on its own… without greedy developers.”

Additionally, the activist group Save Oak Cliff was formed as a direct response to Alamo’s proposal. That group’s goal, they say, is to preserve the culture and heritage that Oak Cliff created autonomously. It even organized a Bastille Day protest last fall to bring attention to their efforts. A separate Save The Bishop Arts District organization has also been more active recently, calling for people to meet at city hall to pressure council members into voting against Alamo Manhattan’s plans.

Individual business owners have also been vocal in their disapproval. Meri Dahlke, owner of Ten Bells Tavern, could lose her business’ location to Alamo Manhattan’s proposal. Last June, she told CBS that the “soul of the city” is at stake, that Alamo Manhattan is capitalizing on the opportunity to maximize their profits “on the back of the people who did the hard work to get people to come here in the first place.”

Of course, not all business owners affected by the planned construction project share Dahlke’s concerns. Zoli’s NY Pizza owner Jay Jerrier, for one, is trying to see things in a positive light. Never fully happy with his building’s poor foundation and faulty plumbing, he sees the forced relocation as a chance for a fresh start, even going so far as to say he’d be tweaking his business model and switching to full table service at whichever new location he chooses for his restaurant.

“I’m sure they will all get some structure that everyone will be happy with,” says Jerrier when reached this morning. He even envisions that the remaining businesses and restaurants in Bishop Arts would likely benefit from the new development: “It will help bring some more bodies to the neighborhood, which most restaurants will probably enjoy.”

There is something to be said for his pragmatic approach to what he deems an inevitability. Especially when considering what that will look like, which can be found in a fabulous artist rendering from Alamo Manhattan that was obtained by the Dallas Morning News.

Ladies and gentlemen, Your New Bishops Arts District. Learn to embrace it?