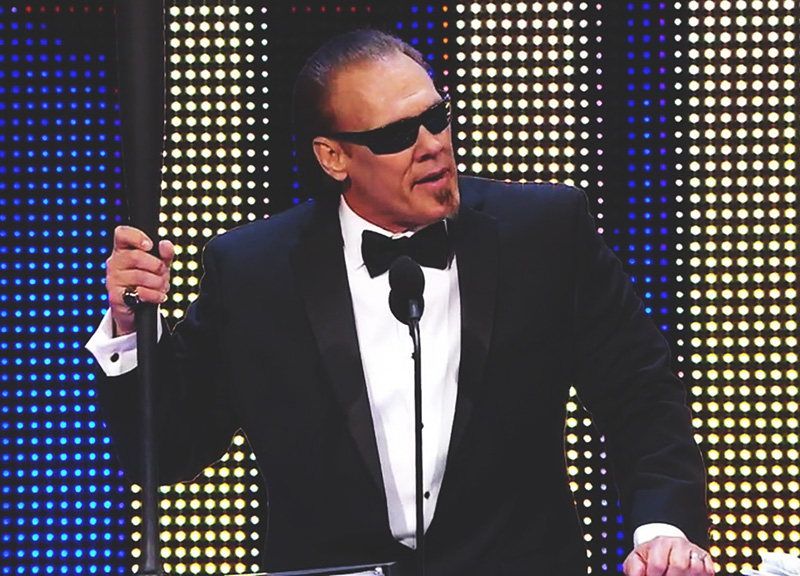 WWE Honored Wrestling Legends At The AAC On Saturday Night, And One Then Said Goodbye To The Sport.

The WWE Hall of Fame induction ceremony is the one night of the year when the WWE fills up a an arena with wrestlers and nobody tries to beat the hell out of each other. It’s a night of honoring the wrestlers from the past and giving them one last moment in the spotlight.

Saturday night’s annual offering was no different, as fans from all over the world packed the American Airlines Center to see legends and childhood heroes inducted into the WWE Hall of Fame.

It was a little different from what you might expect at a WWE event. Producers kept up the traditional entrance and jumbotron that they always have, but the ring was substituted for a big red carpet, where all of the wrestlers from past and present sat in their best suits and gowns to see this year’s ceremony. The crowd was incredibly responsive, if a bit older than the usual WWE audience, and, fittingly, they cheered for every mention of the Dallas Sportatorium, the Von Erichs or World Class Championship Wrestling. Or, at the very least, they acted like they knew what everyone was talking about. The only thing that didn’t get a very good reaction, really, was Stan Hansen giving a shout-out to Japanese wrestlers like Kenta Kobashi and Mitsuharu Misawa, which is a shame because they’re amazing wrestlers themselves.

The Hall of Famers that got the most time over the course of the night was not the Dallas-dwelling headliner Sting, but the Fabulous Freebirds, the famous trio that spent most of its career wrestling in Dallas’ local promotion company World Class Championship Wrestling. The threesome went on for around 45 minutes, and the crowd ate up every second of it. They even got Kevin Von Erich to say a few words — including a moment when he called out the current WWE tag team favorites The New Day as “the new gay guys,” which drew a kind of muffled, awkward laughter from the crowd. In a twist of hilarious irony, The New Day were also the ones inducting the Fabulous Freebirds — a tag team that would paint up their faces with confederate flags, which The New Day was quick to mock in their induction speech — into the Hall of Fame.

Despite the numerous legends who came out to give speeches that night, it was John Cena, who hasn’t been seen on TV for several months at this point due to injury, who got the biggest reaction of the night when he came out to induct Snoop Dogg into the celebrity wing of the Hall of Fame. The people I was sitting next to didn’t clap or cheer the entire night, but soon as Cena walked out, they were singing out “John Cena sucks!” to the tune of his theme songs, right along everyone else in the arena.

The night was left on a bit of a sour note after Sting officially announced his retirement from wrestling, despite his claims from earlier in the week about wanting to keep going. As he was leading up to it, you could hear the disappointment of the crowd. He still received a tremendous ovation as he left the stage, but there were numerous people talking to their friends as they walked out of the arena, talking about how WWE made Sting look like a joke in the last year of his career, forcing him to lose to Triple H at WrestleMania last year and to Seth Rollins at Night of Champions.

Mostly, it was a feel-good night, for sure, but I can’t say you’re missing much if you just watch from home. The live crowd doesn’t have the same energy that normal wrestling show would. This event is a lot more Academy Awards and a lot less Monday Night Raw. You probably didn’t get to see The Big Show vaping like a fucking chimney on the live broadcast, though.