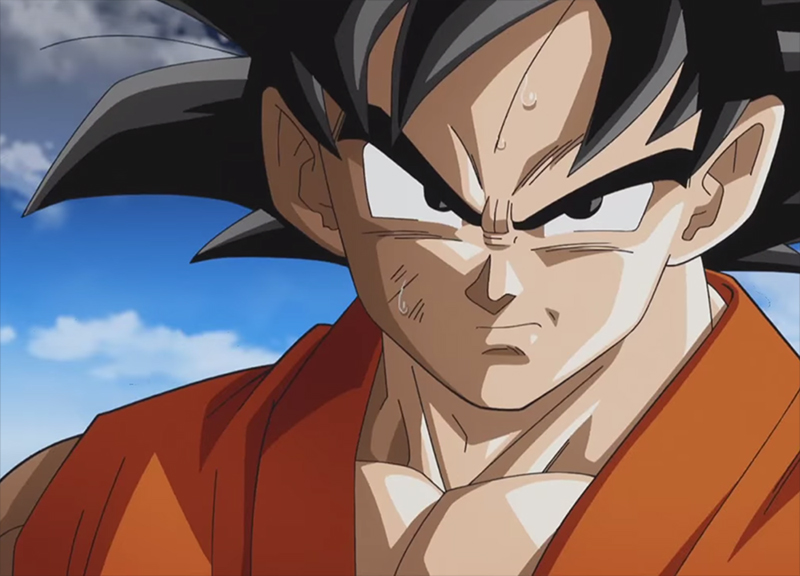 Warning: What follows might be the nerdiest review on this site yet.

If you were a young nerd back in the late '90s or in early '00s, you were either well aware of or a hugely dedicated fan to the anime based on the manga of the same name, Dragon Ball Z.

The series, should you need a refresher, centers around Son Goku, a member of the humanoid alien race the Saiyans, and his friends as they fight powerful villains bent on destroying the universe. Since the show ended its Japanese run in 1996, it has been translated into various languages and become a worldwide hit. But after a disastrous sequel series and a re-edited English dub, the franchise became fairly dormant.

Then, starting with 2013's Dragon Ball Z: Battle of Gods , series creator Akira Toriyama returned to his most popular franchise with new movies and a new series. Resurrection F, the latest film in the franchise, takes place after Battle of Gods when Goku fought the God of Destruction (Lord Beerus) and deals with the return of DBZ's most iconic villain, Freiza.

After being killed twice, Frieza is stuck in Hell. The remnants of his army are scattered and struggling, so they come to Earth to use the Dragon Balls to revive Frieza. Naturally, he seeks revenge on Goku for what happened to him. Meanwhile, Goku and his frenemy Vegeta are training with Lord Beerus and his assistant Whis to become even stronger. And when Frieza finally comes to Earth, ready to destroy it, a whole bunch of flashy battles, power-ups and hella collateral damage ensue.

It's interesting that Resurrection F is coming out at the same time as the Wet Hot American Summer Netflix show. Both are new entries in long-dormant properties that feature their original creators. Impressively, both feel fresh and familiar at the same time. And, better still for anime fans, bringing Frieza back as the main DBZ antagonist also makes this entry very inviting to newcomers.

One of the best things about the movie is the way the series' animation has improved over the years. While the majority of the movie still retains the hand-drawn look to it, a lot of scenes here are aided by CGI. Usually, this can lead to mixed results — but, in this case, the CGI is rendered in the hand-drawn style, making the fight scenes that make up the last half of the movie much more dynamic than anything in the TV series.

Speaking of fights: This movie spends considerable time showcasing the minor characters in the fight, which is a nice change of pace. While this is definitely The Frieza-and-Goku Show, it's nice to see characters such as Master Roshi, Krillin and Piccolo getting the chance to strut their stuff, too.

In terms of plot, the movie is heavy on exposition. For the most fervent fans, this will be somewhat tiresome; for series newcomers and the rest of us, it's some welcome help. Still, the tight pacing — and the fact that most of these backstory reminders take place in the first half of the film — keeps the film from faltering as a result of this necessary evil. And the momentum it builds allows, too, for a nice variation on the standard Goku story arc of “initial fight with new villain, defeat, training montage, final fight, victory thanks to new powers.”

The movie's most obviously lacking aspect is its editing. There are several times when there would be a hard cut, and it felt like there was an entire sequence missing. This occurs a few times during the first half of the movie, and it feels very amateur. Another minor quibble would also be the really awkward insertion of the song “F” by the awesomely named Japanese band Maximum the Hormone. This song inspired Toriyama to write the movie, so it plays during Frieza's return. But it's a clear outlier, as it doesn't go with the movie's score and, unless you know this backstory of it, it feels out of place, as if it would've been better reserved for the end credits.

Every once in a while, you'll hear of a movie that's “critic-proof.” In short, that phrase just means that, even if there's thousands of bad reviews out there for a film, audiences who are dedicated to the franchise won't care and will go see it regardless. Dragon Ball Z: Resurrection F is definitely a critic-proof movie. But it also happens to be another fine entry into the now-almost-30-year-old franchise. It's got great fight sequences using all of the characters, there's some clever and humorous writing, and the animation is as strong as this series has ever seen.

Long-time fans should not be worried going into this movie — especially since they're likely to be thrilled on the way out. Dragon Ball Z: Resurrection F not only entertains on its own, but it lays out the groundwork for future conflicts and entries into the franchise.

Presuming those future entries are at all like Battle of Gods and this one, that's incredible news.