A Conversation With The Themed Airbnb King Of Dallas. 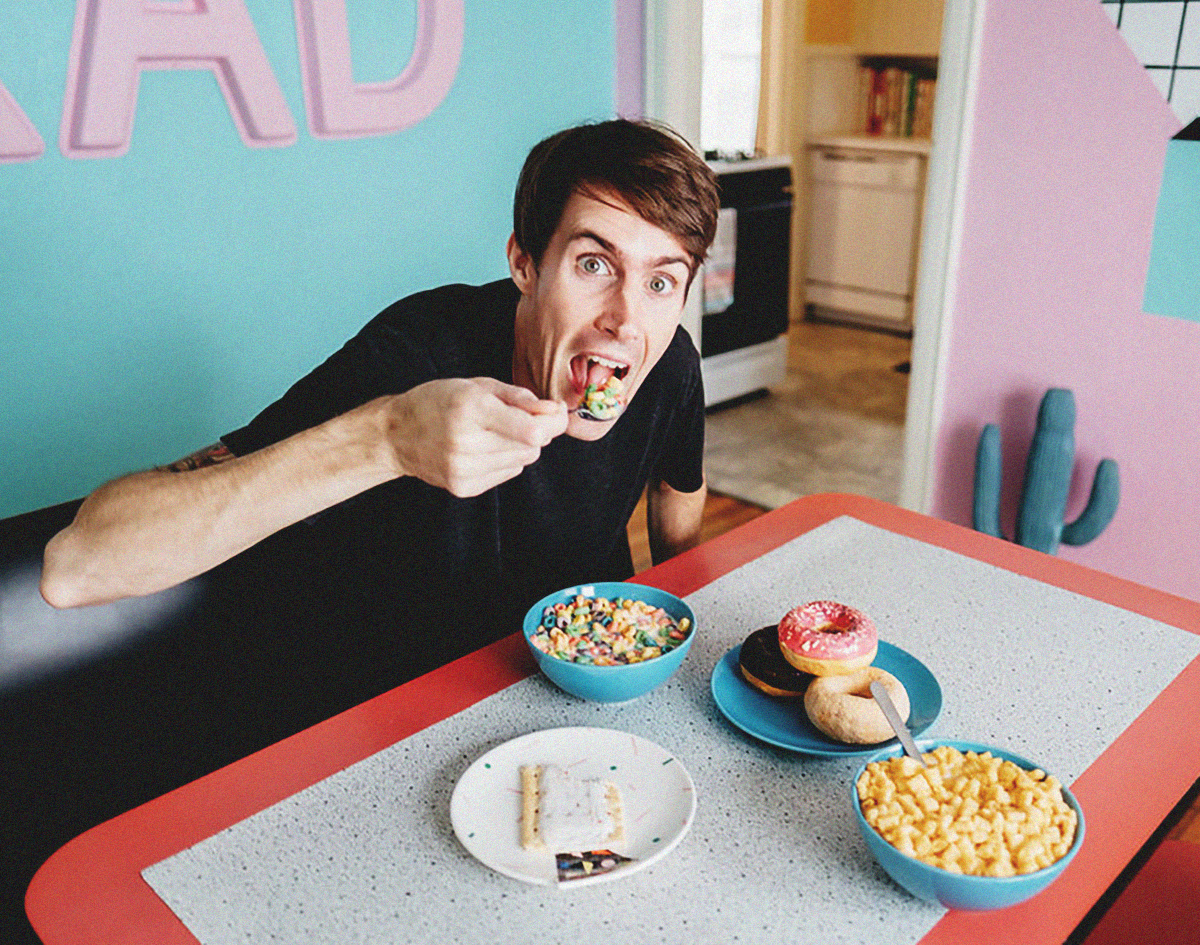 For more than a decade now, Jeremy Turner has stood out as one of Dallas’ most creative hustlers and entrepreneurs.

In his early 20s, he launched The Vintagemobile, a mobile thrift store he operated out of a converted school bus. Then came the decade-long run of his annual pop-up retail store, the Ugly Christmas Sweater Shop, which launched as a standalone seasonal store at Dallas’ Mockingbird Station complex and eventually expanded to include separate outposts in Fort Worth and Frisco before last year’s final run. Meanwhile, beginning in 2013, he also operated an Airbnb out of the other side of the duplex in which he and his family lived.

Now 34 years old, Turner has completely removed himself from the retail world and become fully committed to the short-term rental game — with some serious success, too. And it all started with a commitment to a wild hair of an idea he had.

In 2018, he decided to convert that previously fairly standard Airbnb space of his into a themed homage to 1980s pop culture that he called The McFly, thinking it might help the property stand out from the pack. Within a year, that idea had proven so successful that he was able spin it off into a similar follow-up called The Slater that shifted its scope up to the early ’90s. This year, he’s been able to add two more themed properties to his growing Airbnb portfolio: In June, he opened the late ’90s-themed The Topanga and, just this month, he opened a 1990s Christmas-themed nod to the movie Home Alone that he’s calling The Kevin.

These days, Turner is running his burgeoning Airbnb empire full-time — and blossoming himself into his role as The Themed Airbnb King of Dallas.

With the latest of his four Lower Greenville-area properties now officially open for business, we recently caught up with Turner over the phone to discuss the details of his latest creations, to learn his mostly staycation-centric model has been affected by the still-ongoing pandemic and to talk about the how the craziest ideas are often the most rewarding ones.

OK, first of all, since we’re heading into the season: Are you doing the Ugly Christmas Sweater Shop anymore?
I’m not this year — and I think that’s sort of why I said I’m great! It’s just sort of how I’m wired — like, I love the new, y’know? I did that shop for about 10 years, so I’ve been wanting to do and create new things. My kids are seven and five, so this will be the first Christmas that they have me for the whole season.

Well, congrats on that! Based off your latest announcement, though, it does seem that you’re maintaining some of your expected holiday spirit.
Yes! So, the latest Airbnb is really a tribute to my favorite Christmas movie, Home Alone. I wanted to make people really feel like they were in that movie. Whenever guests pull up to the place, it’ll look like there’s people inside; they’ll see the silhouette in the windows of the mannequins. We’ve also set up the Michael Jordan cut-out on the train, already moving around. So, people will come in, and it will look like they’re sort of in a 1990 Christmas house or something. Oh, and every stay gets a free cheese pizza delivered! 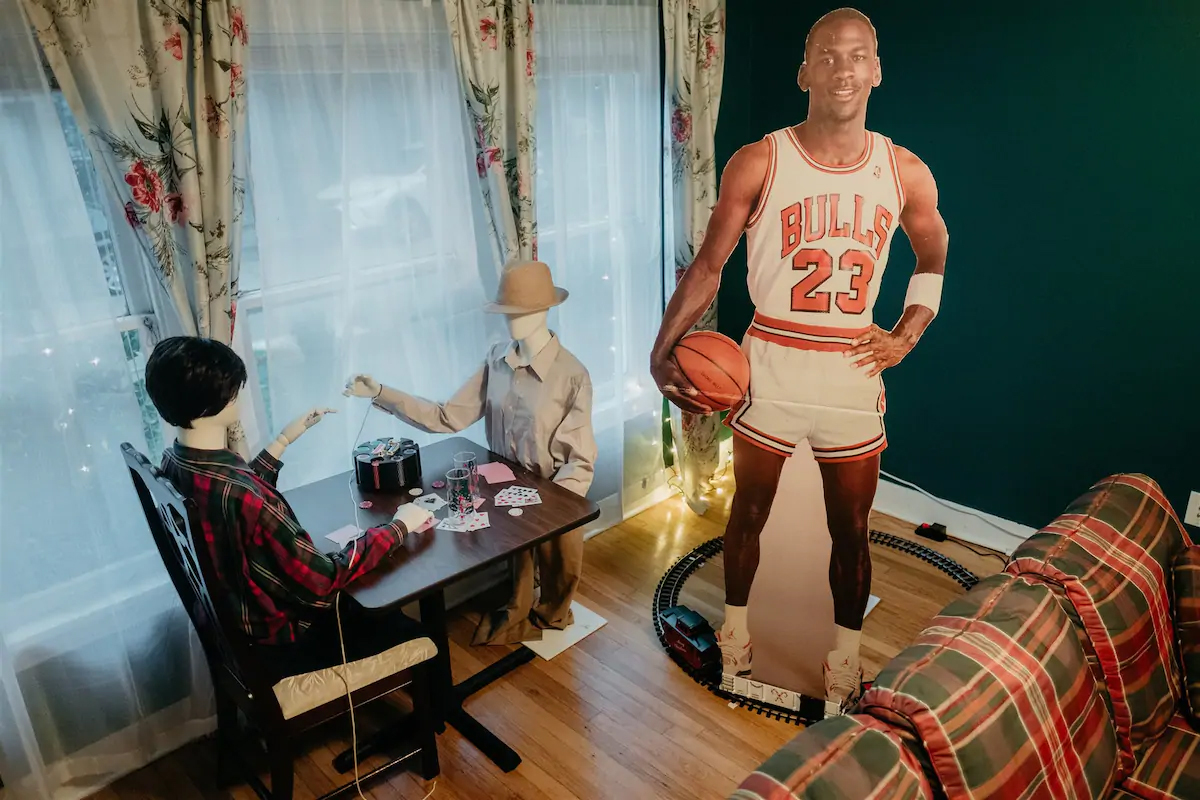 The Kevin. This ’90s Christmas-themed property was opened in November 2020 and is named for Home Alone’s Kevin McCallister. It rends for $180 to $325 per night.

To my count, this is your fourth themed Airbnb. Is this taking the place of one of the others, or is it a new thing entirely?
It’s a new thing entirely — and, yes, the fourth property. It’s just one of those things. I had the idea in the summer, and I just had to do it. I just thought that would be so freaking cool.

We’ve covered your properties The McFly and The Slater before, but we’ve not yet talked about The Topanga. Can you describe The Topanga for me?
I would describe it as sort of being in, like, a ’90s birthday party or something — and we actually get a lot of people who will come for that reason, for their birthdays or anniversaries. It feels a little bit more late-’90s. There’s inflatable furniture, and a Rugrats poster, and a Spice Girls poster, and a Nintendo 64. Then the dining room looks like you’re in a giant cupcake or something with these huge sprinkles on the wall.

And that brings us to The Kevin, which is a limited run — right?
I’m not sure. Probably! But now that I finished it, I’ll see how it’s going. If it’s going strong in January, yeah, I might do some sort of like extensions to it and see if there’s anybody out they’re crazy enough to come in March or April. Or July! Then it kind of makes sense to keep it open — because I like it so much and we worked so hard on it.

Let’s kind of zoom out some. Do you run Airbnbs for a living now? Was that always the goal?
So, the sweater shop really afforded me the chance to buy the duplex [that became my first two Airbnbs] back in 2013. I mean, real estate was different then too. It was totally one of those timing things. I really just had a good relationship with my landlords, and they sold it to us, and then we were like, “Hey, let’s do an Airbnb on the other half.” So, at first, we had a totally just regular Airbnb — an eclectic, but classic Airbnb — in 2013. 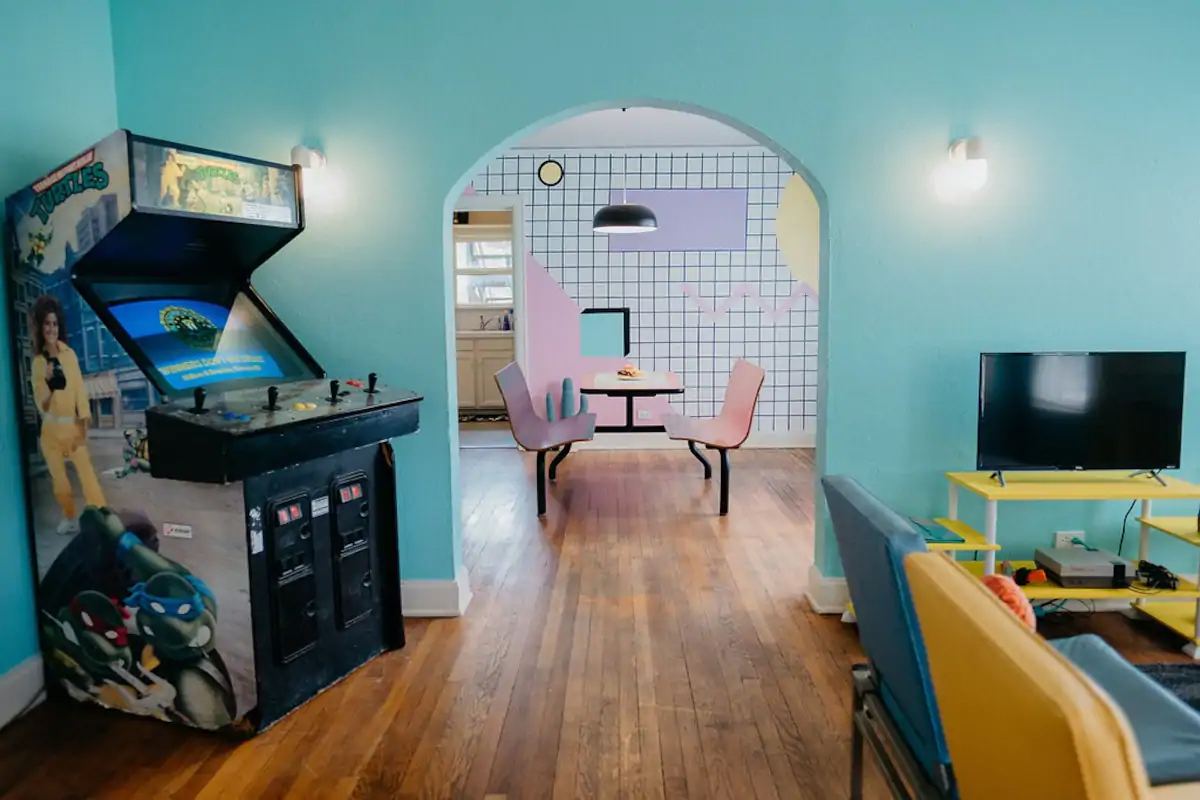 Which became The McFly.
Exactly, yeah. So, I had that during all those sweater shop years, and I just kept having so many ideas for Airbnbs — just all these different ideas that I wanted to do. So I was pressing on with the sweater shop to help fund that, and also some of those bigger dreams I haven’t done yet — but it’s like, ‘We’re gonna keep going!’

How did the idea of themed Airbnbs come about?
It just sort of hit me one day, the thought for The McFly. We had never seen anyone do anything like that before, y’know? As everybody has seen on Airbnb, there’s tons of unique properties where it’s like the actual building or the place — a treehouse or a lighthouse – that makes it something special. Then, when we realized, ‘Whoa, we can actually make regular houses special?’ That was pretty cool to explore that idea.

So the story goes: You were renting a place along Lower Greenville that was a duplex, and then you purchased the entire duplex from your landlord. Then you turned the one side into The McFly and you were living in the other one. Then your growing family moved out, and the place where you lived became the Slater. Then that funded The Topanga, and now The Kevin. It’s such a model you operate now, but what kind of reaction do you get from these themed properties? Do people specifically seek them out?
Yeah. So, to their reaction: I mean, people love the places. It’s really too cool, man, just as a creator. It was somewhat the same with the sweater shop, although it’s a little bit different because people spend more time in them. It’s not just that they’re spending more time there; there are more areas where people can create memories with their families. That’s what I love — that we sort of engineer these peak moments throughout the place that we know are going to be really fun for this family or these friends. Just to know that something special and surprising will happen here is really great. Every now and then, I might be getting a place ready or something, and a guest might walk in the door to check in, and I’ll hear their reaction. It’s just like, “Whoa! Oh my gosh!” I just love it. It energizes me in that I feel like I have this ability to create spaces that can change someone’s emotions or spread that joy when they come into a space. I love that. 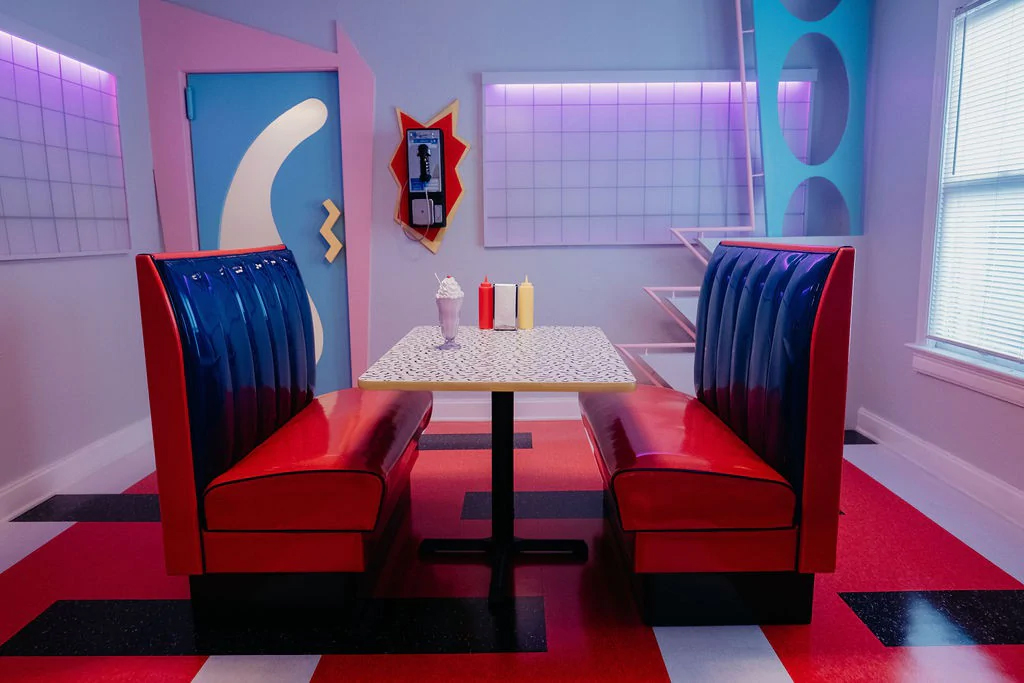 I imagine people seek out that experience.
Within Airbnb, because there’s so many different types of Airbnb, I think a lot of people are looking for something a little different. Then people will stumble upon ours and they’re just like, “What the heck is this? This is unreal!” Our places within Dallas have a reputation now, too — and especially the McFly because it’s been around a bit now. There’s definitely that, where people coming in have already heard about them. I mean, man, I cannot tell you how many birthdays we get. We don’t allow parties, but we get so many people who will come to our places because they’re turning 30 or 40 — or for anniversaries! I can’t believe how many anniversaries we get.

Do you find that, because they’re such unique properties, a big portion of your guests are local? Like, people doing staycations?
Dude, yes. That’s what blows my mind probably the most about it. When you have a regular Airbnb, you are depending on people traveling to your city. You’re hoping people are coming to Dallas for work or tourism. But our places have become sort of like part of the destination. We get so much of our business from Dallas people. So much. That’s a unique thing to our Airbnb.

Before your switched things to The McFly with your original 2013 AirBnb property, were you getting those staycation types?
Oh, no. No. I don’t remember those. 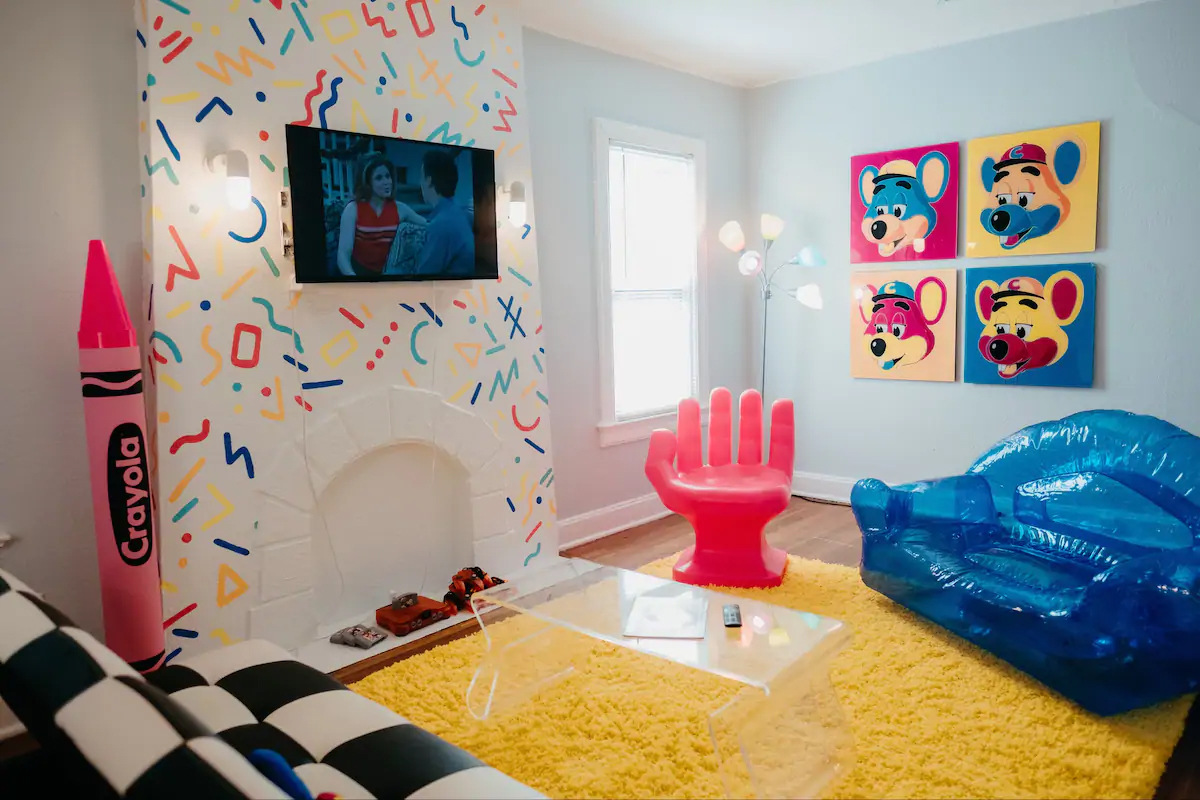 The Topanga. This late ’90s-themed property was opened in June 2020 and is named for Boy Meets World’s Topanga Lawrence. It rents for $90 to $130 per night.

In the age of like Instagram — and I think it’s cool what you were saying about birthdays and anniversaries —  what about photoshoots? I imagine you get a lot of those too.
We definitely get a lot of that. All kinds of different photoshoots. High school senior portraits, that sort of thing. We’ve had a handful of local businesses shoot their new products there, too. I really love that.

How is all this working out during the time of COVID?
It’s interesting, for sure! You just have to really be very, very clear — extra clear — with people about, “Hey, we do not allow events, we do not allow parties. Do not come for that reason.” So, there’s that. But, besides that, because we get so much local business, they’ve done pretty well.

Has Airbnb forced you to institute any new cleaning processes?
Yeah. Everybody had the chance to sign up for an enhanced clean protocol, and we enrolled in that. It basically just means following more of what the CDC recommends for the new normal.

That aside, normal has never really been your thing. You’ve made a career of embracing notions that outsiders might think of as cockamamie ideas. It’s impressive how you’ve really run with your creativity — even in the short-term rental business.
Thanks, man. Thanks for saying that about the whole creativity thing. Like, I’m definitely familiar with that feeling of just, “Well, this might not work…” but that’s kind of where I like to be — or where I like to find myself. I feel like that means I’m heading in the right direction.

Growth happens outside of your comfort zone, I guess.
Totally, man. Totally.

Jeremy Turner munching down on some cereal at The McFly, one of four themed Airbnb properties he owns and manages around Dallas.

This interview has been condensed and edited for clarity. All photos by Nicholas Leitzinger, courtesy of Jeremy Turner.