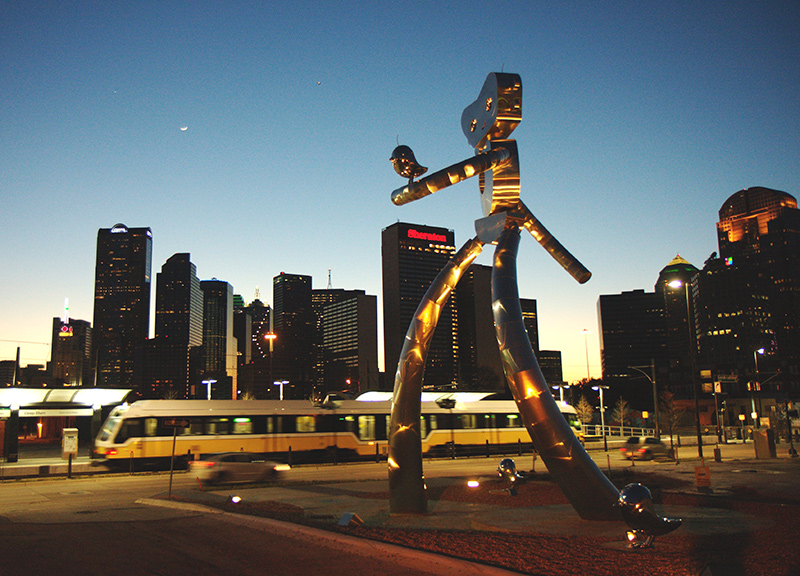 Historically, Deep Ellum has caught a bad rap as being one of Dallas’ more dangerous neighborhoods — the kind of place, or so goes that oh-so-familiar mid-’20s tune, where one should keep their money in their shoe.

Alas, perception is not reality. And that truth is a bit of a double-edged sword, really.

Take, for instance, some other parts of town that are generally regarded as the quote-unquote nicer areas — neighborhoods like Uptown, whose Katy Trail is often a hotbed for muggings, and Oak Lawn, where there have been more than a dozen robberies and assaults in the past few months alone.

It’s much rarer that you read these kind of stories about Deep Ellum.

So why, then, is the Deep Ellum Foundation now paying off-duty Dallas police officers to patrol the neighborhood six days a week? According to Jessica Burnham, the foundation’s executive director since this past June, the move is a proactive one.

“The foundation is in a rebooting phase where I’ve come on board as the new executive director, and we’ve really taken a big initiative on how the board wants to allocate our budget,” she says. “The board has made a big decision to put a big chunk of our budget towards [safety] to help promote the area.”

The Public Improvement District funds paying for the added security comes via an additional tax paid by Deep Ellum business owners. The Deep Ellum Foundation is a 501c3 that contracts with the City to administer the PID funds for Deep Ellum, with the caveat that the money must be used for “improving, enhancing and marketing the area.”

Recently, the foundation decided to begin allocating close to half its budget to a pair of uniformed, off-duty police officers that have been patrolling Deep Ellum six days a week since January 4. For the time being, those officers have been working the neighborhood from Monday to Wednesday from 10 a.m. to 3 p.m., Thursday from 7 p.m. to 2 a.m., and Friday and Saturday from 9 p.m. to 3 a.m. Their primary objective, as laid out by DEF? To tackle the neighborhood’s panhandling problem.

“Their main focus is on panhandling and the homeless, and making sure [they] know it’s illegal to panhandle 24 hours a day, seven days a week, on any type of property,” Burnham says. “It’s totally illegal. They’re writing citations and they’re writing tickets if they need to. They’ve made a couple of arrests. But they’re not focusing on if someone is jaywalking from Trees to Twilite. They’re not going to write tickets for that. They’re here for the overall safety; they’re not here to be a nuisance.”

More than just doling out meaningless tickets to the homeless population — ones that they likely can’t afford to pay in the first place — the officers have been asked to patrol on foot and get to know each of the neighborhood’s business owners and homeless population alike, helping to understand them and pointing them in the direction of the help they need rather than simply driving them to other parts of the city.

“A lot of the homeless that are down here, the officers are really making sure to connect with them,” Burnham says. “They’re talking to them and getting them to relocate. But we’re also working on educating all our visitors and business owners and their employees that it is better to give a homeless person information on how to get help than giving them money — which can be really hard.”

Aside from adding additional police coverage in Deep Ellum, DEF is also working with local charities like Our Calling, Austin Street Center and The Bridge to help put a long-term dent in the homeless situation rather than just slapping a Band-Aid on the situation. Signage going up in the neighborhood will advise Ellum’s visitors that donating money to one of the charities at deepellumcares.com is more beneficial to the homeless than giving them change.

By paying the officers with the PID funds, rather than just requesting that the city step up its patrol efforts in the area with on-duty officers, DEF has the ability to direct the officers’ focus — in this case, squarely on the volume of panhandlers.

“There’s a whole system where officers come down based on how many calls they get for an area,” Burnham says. “If a lot of the calls are just for panhandling, those are not always answered right away. The goal is that we’re covered in everything, but that we’re not replacing on-duty officers. I’ve met with [Deputy Chief John Lawton of the central patrol division] and with [Deep Ellum’s Neighborhood Patrol Officer Jeff LaBarba]. Even though we’re putting these officers in place, it doesn’t mean we’re replacing on-duty officers. We’re adding to the officer presence.”

So far, Burnham says the initiative appears to be having a positive impact on Deep Ellum. In two weeks since its implementation, she says officers are reporting a dramatic shift in the neighborhood’s homeless population as they begin to get frustrated with officers and recognize that Deep Ellum isn’t where they need to be. As the program continues, Burnham hopes it will have just as big an impact on the perception of Deep Ellum’s safety by those that are still too intimidated to visit with any regularity.

Says Burnham: “Panhandling and homelessness is a problem. When you’re here and you’re a regular in the area, that’s kind of a given. People still think that Deep Ellum is scary and not safe, but that’s just not true. We’re hoping that these efforts will speak louder in volume than just putting on events. You can put on events, but if people don’t feel safe, there is no point.”