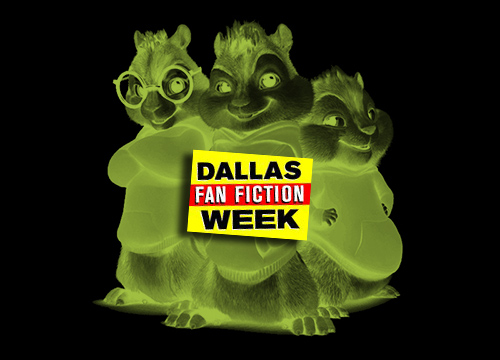 Too Old For This Chip.

“Too Old For This Chip.”
“Just three more signatures, Dave, and the picture’s a go.”

Mr. Seville could still hear the words of the steely-eyed Hollywood executive burning in his ears.

“We’re really counting on you here to get it done.”

In his heart, Dave knew that was true. He knew that this film would be his last real chance at making it in this town, too. Unfortunately, he also knew that it mean his entire career now laid in the adorably small, furry brown hands of his three adoptive sons. That is, of course, what worried Dave the most. Over the years, he and his boys had become increasingly estranged.

But he had to do it. So Dave mustered all the courage he could and, with fake cheer in his voice, asked the chipmunks if they were ready to sign their contracts. He tried not to let any hint of desperation — and therefore weakness — slip through his seemingly chipper facade.

“Yeah, sure,” the bespectacled one muttered less enthusiastically than usual.

“Are you ready, Theodore?”

“Yeah, OK,” mustered the chubby one.

“Alvin?” he again queried, this time with a little more urgency.

“No fucking way! Absolutely not!” piped up Dave’s most hard-headed scion, finally. “The last thing the world needs is a fifth goddamned Chipmunks movie!”

As much as the idea frightened him, Dave knew truer words had never been spoken. And yet, a strange sense of calm washed over him. Naturally, something as severe as his meal ticket walking off would send Dave through the roof. But Dave wasn’t so much upset as he was disappointed.

“What will it take?” Dave asked. “Have I not given you everything you’ve always wanted? I took you in and gave you a place to live. I’ve lavished you with all the riches your hearts ever desired. I mean, fucking planes that loop the loop don’t come cheap!”

“I still want a hula hoop,” Alvin demanded, punctuating his lingering childhood demand with a well-timed fist-pound on the comically-oversized desk in front of him.

The subject’s always been a sore one between the two. But it’s more than that, thought Alvin. He was also tired of pretending – pretending he was still an impish teenager instead of the gravel-throated, foul-mouthed, chain-smoking rodent he’d grown into since hitting puberty a few decades back. Let’s be real, too: It was the high-pitched voice thing that ate at him the most. After his nuts dropped sometime in the ’70s, so too did his voice. Since then, a string of actors from Ross Bagdasarian to Justin Long were brought in to mimic his old pitch in post-production voice-overs. That was Dave’s idea, and one that worked all too well up to this point.

But Alvin had finally reached his breaking point.

“And I’ve got to get out of Hollywood,” he added. “I need to be somewhere with that special sense of community that you just can’t really find in L.A.”

After a brief loss for words, it finally hit Alvin: “I really just need to keep things beard, y’know?”

He thought long and hard about it, and ultimately decided his future lay in a charming little music-loving Texas town named Denton. It is, after all, where all the once-hip old actors are going these days to let their facial hair grow and really let it all hang out. There, he’d once again be just another one of the cool small-town folk milling about the square, buying Stetsons secondhand at Mini Malls I and II. Also, for the first time in his life, he could wear pants in public.

“Simon and Theodore, I want you both to come with me. Think about it: We could live in obscurity, escaping our flashy Hollywood pasts and totally start over. Like, fuck that Chipmunks crap. We could finally make the music we want to make. Anything! The possibilities are endless. Hell, I bet we could even become the best ever death metal band in Denton if we wanted.”

“Death metal?” the brothers asked in that kind of comically simultaneous manner that only really happens in cartoons.

“Yeah, death metal! We could call ourselves, I dunno, like Satan’s Fingers or The Hospital Bombers or something.”

“But we’re The Chipmunks,” Simon shot back. “Alvin! Simon! The-o-dore! Doot doot, do do do doot.”

Ever the compromiser, it was Theodore whose big idea finally set the wheels in motion.

“Forget the music thing. Why don’t we just open a bar instead? C’mon, a world-famous band opening a college town bar? How novel that would be!”

“Why don’t we just gimmick it up some more?” Alvin retorted sarcastically. “Why not call it Chips? And we’d only sell cheap beers and boxed wine! And we’d downright refuse to take credit cards!”

“Those are all great ideas!” his brothers replied naively.

Alvin couldn’t take it any longer: “You fools! That shit would never work!”

“You’re right,” his brothers agreed, again in unison, and accompanied with a sigh, which similarly exhaled in chorus.

With no real Plan C, they decided to just go with that whole metal band idea. So that’s what they did, opting to use their naturally deep and road-hardened voices to produce some of the most haunting sludge metal anyone in Denton had ever heard.

National critics agreed, too. An A.V. Club article went on to call the band’s debut effort “brilliant and terrifying.”

When Alvin first read that review, he let those words wash over him. Those were two things that nobody had ever called a Chipmunks movie — and proof, maybe, that Alvin wasn’t quite the miscreant that Dave had so often made him out to be before.

“Dave’s a jerk,” Alvin thought to himself in that moment. “Maybe he always has been, too, and I just couldn’t see it through the Hollywood connections and sheen he’d previously shrouded himself in.”

He read the review once more. Then he smiled to himself.

• All Tay’s Exes Perform In Texas. On a serendipitous evening three of Taylor Swift’s ex-boyfriends perform in Dallas at the American Airlines Center. Yes, there is drama. Yes, there is bad blood.
• Out To Lunch With John Tesar and Matt McCallister. Two of Dallas’ most celebrated chefs have lunch… at a Taco Bell. James Beard award winner Alice Laussade’s hilarious story sheds a light on the chef’s “big” personalities.
• I, Nowitzki. Comedian Clint Werth pals around with Dirk Nowitzki, then steals his identity — and much to the chagrin of Tim Duncan.
• The Misadventures of Lo Down Loretta Brown. Ever wonder what it’d be like if Erykah Badu was a superhero? In this story she is; she’s Lo Down Loretta Brown.
• Dr. Phil’s Show of Revelations. Jerry Jones appears on Dr. Phil to unveil a big secret. But will anyone believe him?
• Another Keep-It-Real Moment. What happens when a radio ad pitch stops being polite and starts getting real?