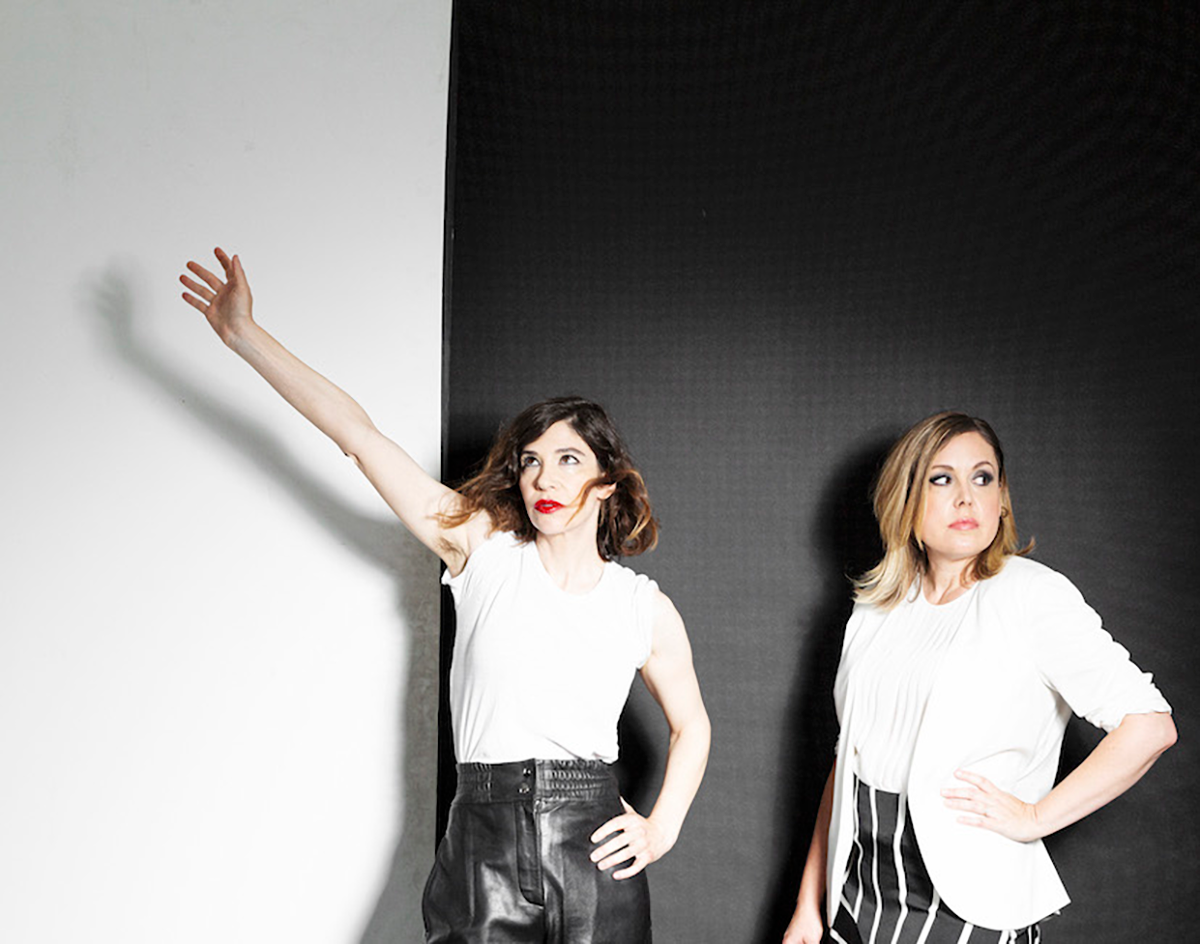 Hurry On Home To Sleater-Kinney, Drop It Like It’s Hot For Snoop Dogg And Keep It Smooth Sailin’ With Leon Bridges. Plus More!

If anybody could bring some soul to Pixar, it’s Terrell native Jamie Foxx.

The studio’s previous tear-jerkers have featured an eclectic range of protagonists, from toys to monsters to literal figments of the imagination, but there’s still one type of protagonist it has lacked until now: a black main character.

In the film, Jamie Foxx plays a music teacher who gets the chance to perform in a jazz club, but dies in a slapstick pothole accident before the gig. His soul, visualized as a blue blobby creature, is then transported to a metaphysical realm where he meets a snide fellow soul voiced by Tina Fey.

This progress in representation is certainly worth applauding, but the film still has one nagging issue. Namely, it’s another Disney film where a protagonist of color spends the majority of the movie in some transformed state. It’s particularly noticeable in Disney’s last film with a black leading character: 2009’s The Princess and the Frog. Even then was Princess Tiana in the form of a talking frog for most of the film, so it’s disheartening to see Disney’s few black protagonists continued to be abstracted to the audience.

Beyond that concern, the movie certainly looks promising!

During the trailer, Foxx’s voiceover pleads “don’t waste your time on the junk of life, spend your precious hours doing what will bring out the real you.” Good advice, we must say.

If you’re looking for ways to spend those precious hours, here’s some cool things to do in DFW this weekend. — Daniel Valdez

Angel Olsen at Granada Theater
Everyone praised Angel Olsen’s third full-length My Woman (and rightfully so), but there are also Bonnie Prince Billy collaborations that most people do not know about, and they are just as deserving of your attention. There doesn’t appear to be another album in the works (that has been announced anyway), but she is also playing Levitation in Austin. Whatever the reason for her coming here, who are we to look a gift-horse in the mouth? New York-via-Cameroon multi-instrumentalist Vagabon opens. — Garrett Gravley

Sleater-Kinney at House of Blues
Arguably one of the most significant rock bands of the past 20 years makes a welcome, albeit overdue, return four years after its sardine-packed Granada Theater show, and two decades after its even-more-crowded show at Trees. This appearance comes in support of the band’s new St. Vincent-produced LP. — GG

Chelsea Wolfe at Texas Theatre
The ever-so-talented Sargent House artist is performing an acoustic show at one of the oldest venues in town. Ioanna Gika opens. — GG

EDGE: The Texas Monthly Festival at Bomb Factory
Texas Monthly is bringing Leon Bridges, St. Vincent and presumably more artists to Bomb Factory as part of its inaugural festival. A Texchella of sorts, if you will. — GG

Twenty-one Pilots at Dickies Arena
Check out the duo’s 2018 album Trench. It’s actually pretty dope, believe it or not. — GG

The KVB at Club Dada
This duo has been backed by Geoff Barrow, so you know it’s good. — GG

High on Fire + Integrity at Gas Monkey Live!
Hey, remember when we said Power Trip would be co-headlining with High on Fire on this tour? Well, turns out, that tour won’t be including this date, but here are three reasons why you shouldn’t fret: The hometown heroes are promising a show on the horizon that will more than make up for this, Creeping Death is still on the bill and hardcore legends Integrity are filling that vacant slot, and they never come through Dallas. — GG

Allah-Las at Trees
Two years ago, this band almost became the victim of a terrorist attack in the Netherlands. On a lighter note, it has also released of a new album titled LAHS via Mexican Summer. — GG

Strung Out at Three Links
They might be a quarter-century into their career, but it doesn’t look like the California punk band will be turning down the volume anytime soon. — DV

Legends of Hip Hop at The Theatre at Grand Prairie
In 1990s hip-hop, regional scenes were pretty self-contained, but these days nostalgia tours can transcend old geographic boundaries. This stacked lineup includes Houston legends Scarface and Bun B, Memphis duo 8-Ball & MJG and West Coast O.G. E-40, DJ Quik and the Dogg Pound. Unfortunately, the New Orleans MC and literal convicted sex offender Mystikal is also on the bill, but they can’t all be winners. — DV

Bad Bunny at Curtis Culwell Center
Garland isn’t known for bringing pop stars to town, much less reggaeton acts like Bad Bunny, but the bookers at the Culwell Center are changing that reputation. — DV

Aurora “As I Am” Opening Reception
Being a teenager has never been easy, but Gen Z’ers especially have it rough with the world’s imminent doom and all. Local students have made audible and visual art about that struggle and collected it into this exhibition, presented by the non-profit art group Aurora.  — DV

Ace Frehley at Trees
Yes, the dude from KISS. — GG

Cave In at Club Dada
Massachusetts post-hardcore outfit Cave In sprouted from an emerging metal-core scene that boasted other greats such as Converge, Dillinger Escape Plan, Botch, Coalesce and Poison the Well. The band encountered tragedy last year when its bassist Caleb Scofield (who also played in Old Man Gloom) died in a car accident. Despite this, the band has been active, even going as far as to release its sixth studio album, Final Transmission this year. — GG

Leon Bridges at Bomb Factory
As part of Texas Monthly’s inaugural EDGE festival, this Grammy-winning R&B singer is “Coming Home” to the metroplex to headline night two of the gig. — DV

KXT Turns 10 with Grace Potter at The Rustic
Public radio station KXT has made it through a decade, and it enlisted folk songwriter Grace Potter to help celebrate. — DV

Mating Ritual at Three Links
This duo’s sound is indebted to ’80s synth-pop, but lyrically, its quite focused on the present. Its new album is even cheekily titled Hot Content. — DV

Rock Rebellion Tribute Festival at The Pavilion at Toyota Music Factory
A night of tribute bands devoted to classic-rock groups like AC/DC, Led Zeppelin, and Ted Nugent. The name “Rock Rebellion” is fitting, because the truest expression of “rebellion” is slavishly imitating your dad’s favorite bands. — DV

Jack FM Retroplex at The Theatre at Grand Prairie
Speaking of your dad’s favorite bands, this show features some original ’80s dad-rockers like Starship and Survivor. Modern English, best known for “I Melt With You,” was a legitimately hip post-punk act on 4AD Records, so it’s funny to see the band share a bill with groups who wrote novelty songs like “We Built This City” and “Eye of the Tiger.” — DV

All Your Sisters at Double Wide
One of this goth group’s top reviews on Bandcamp reads “great for weeping alone into my pillow at night.” High praise! — DV

It’ll Do Grand Re-Opening
After a month of renovations, this dance club is opening its doors again. House DJ Eagles & Butterflies will be on the decks to celebrate the occasion. — DV

Mac Ayres at House of Blues
The earthy sound of neo-soul icons like D’Angelo and Maxwell can be heard in so much of modern R&B, including the work of this New York songwriter. — DV

Sad & Boujee Emo Trap Party at RBC
Emo and Rap have more in common than you might think. Or so says RBC. — DV

Small Town Murder Live Podcast at Texas Theatre
Each episode of this true crime comedy podcast focuses on a specific tiny town where a gruesome murder took place. The pod’s only look into DFW murders so far is an episode about Gun Barrel City, but maybe the hosts are saving local tales of terror for this live show. — DV

G. Love & Special Sauce at Billy Bob’s
Bluesy hip-hop with similar dorm room poetics to Jack Johnson. Not an unfair comparison, given Johnson signed them to his Brushfire label. — DV

Deep Ellum Creative Market
A two-day art fair focused on local artist vendors, with live music and food trucks, of course. The biggest sponsor of the event is Novel, a luxury apartment complex, which is ironic considering that upscale developments like those often end up pricing out the kinds of artists this event is dedicated towards. — DV

Habibi at Gas Monkey Bar N’ Grill
Imagine a ’60s girl group like the Shangri-La’s traded the lush, pillowy strings for wiry, garage-rock guitars. You don’t even have to, Habibi’s made it a reality for seven years now. — DV

Issues at House of Blues
Remember Korn? Specifically their 1999 album Issues? The one with the song  “Freak on a Leash.” This band would not exist without that record. Well, not with this name, anyway. — DV

Metalachi at Trees
Metalachi take classic metal tracks like “Crazy Train” and “Raining Blood” and turn them into music you could almost play for your abuela. ‘Almost’ being the operative word. — DV

Guerilla Toss at Rubber Gloves
Guerilla Toss’ records don’t really do its frenetic dance-punk justice, you need to see its live set for the full experience. Here’s a taste via their recent Audiotree live session. — DV

Oneus at Granada Theater
If it hasn’t become entirely obvious yet, K-Pop is here to stay, delighting stans and confusing most everyone else. American interest is so high that even relatively novice groups like this one can charge $69 for tickets at the Granada. — DV

Aurelio Voltaire at The Church at Lizard Lounge
A gothic Jack Skellington of all trades, Voltaire has made everything from comic books and short films to original songs for the 2000s cartoon classic The Grim Adventures of Billy & Mandy. The Church has wisely tapped him for his goth-rock stylings. — DV

Jaye Jayle at Double Wide
The night before this show, this Louisville punk group will have opened for its label-mates Deafheaven in Austin. It’s a shame Deafheaven couldn’t have tagged along for this show too, but Jaye Jayle makes for quite a nice consolation prize on its own. — DV