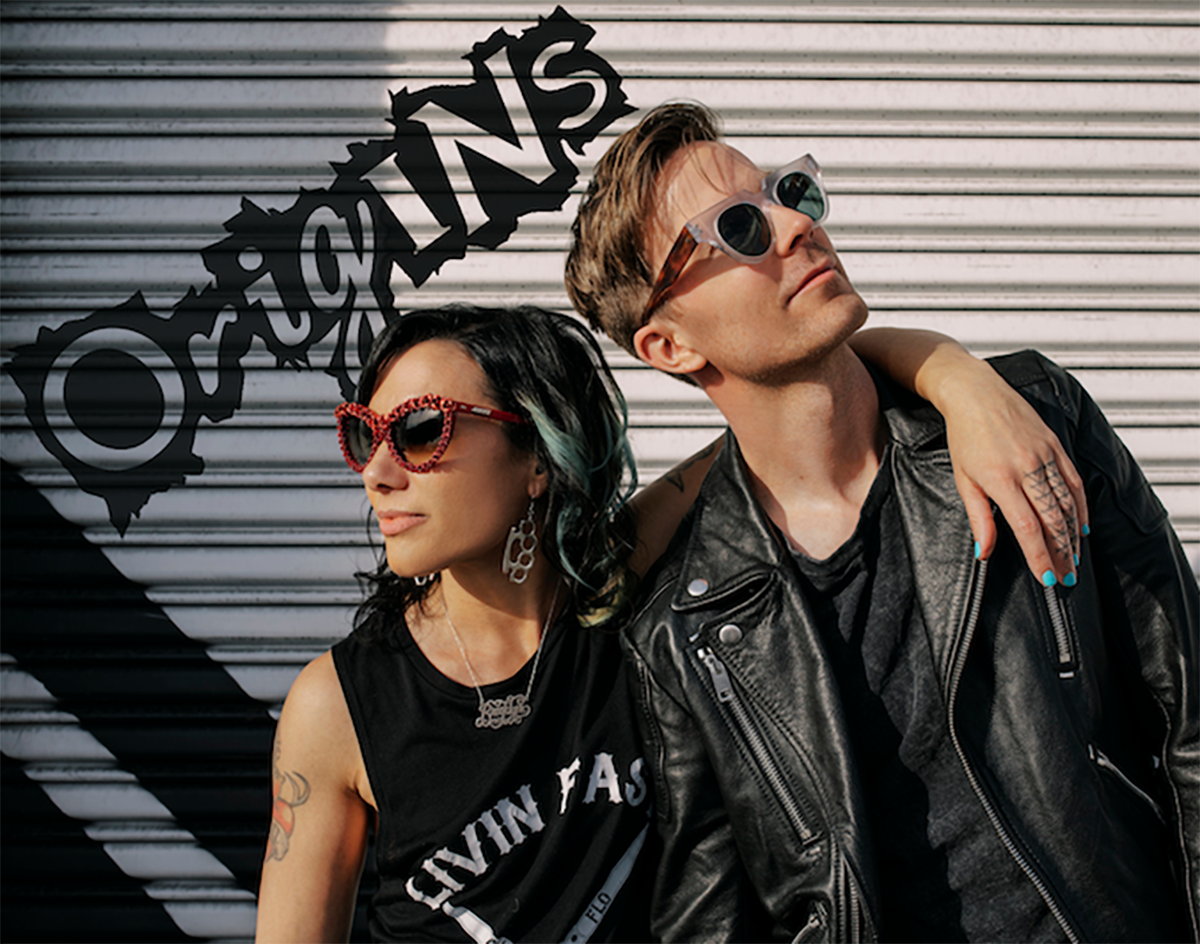 Matt Johnson Of Matt & Kim Talks The Duo’s DIY Roots, Their Breakout Album’s Influence On Their Catalog And My Chemical Romance’s Reunion.

Indulge us in a trip down memory lane when times were simple: The year is 2009, Tumblr is still in its infancy and you just stumbled upon the music discovery blog called “Something For The Ladies” — or a similar music curation spot in the post-Myspace era.

Somewhere through the infinite scrolling, you land on an illuminated track that you would soon hear in Bacardi commercials, video games and A-list indie playlists. OK, so, maybe not in that specific order — but a journey along those lines, surely.

That’s the path Matt & Kim’s contagious song “Daylight” took as it helped the duo behind it burst onto the fringes of the mainstream after years of playing DIY shows in warehouses and small-space shows across the country.

Bolstered by its infectiously-cheerful keyboard intro, the lead single off the band’s 2009 critically-acclaimed Grand LP — named after Grand Street, where the couple lived in Brooklyn at the time — did more than just establish Matt & Kim as nationwide draws. Its vibrant introduction to one of the freshest sounds in indie music at the time would also eventually go on to influence the sounds of younger indie acts of today, such as COIN and Grouplove.

To hear the duo’s Matt Johnson tell it, though, Matt & Kim’s seminal sophomore album helped the DIY duo discover itself just as much as it helped the rest of us discover them. With Matt on the road while the Brooklyn-based couple is in the midst of the “Grand 10-Year Celebration Tour,” we caught up with him over the phone to discuss Grand‘s influence on his band and others, and how the band has managed to keep the same energetic vitality charging in every show since.

In advance of the band’s set in Dallas at The Bomb Factory on Monday, November 11, give our full conversation a read below.

Hey Matt! Where are you at the moment?
We just got into San Diego, which is nice because we were coming from the north and places like Minnesota and Colorado, and it was blizzard-y. Now it’s just sunny beach weather.

Speaking of the tour, you’re celebrating the 10-year anniversary for Grand, which really set the stage for you and Kim and marked a breakout moment for the band. Did it also set a tone for your music in the decade since?
Yeah! I think because of one thing: Grand was not our first album, it was our second. And because of how we did [the first album], we did it really quick and we didn’t know what we were doing. We just didn’t have time to experiment and really find out what we’re supposed to sound like. Kim didn’t come from playing drums and I didn’t come from playing keyboard, so we were figuring this all out [as we went]. Granted I think that has lived on — what we learned in that time. It changes on one album and moves one way, maybe more produced, and then other [times] where it goes back to a raw and un-produced feeling again. Music doesn’t need to work and move in one direction. I think you can go forward and backwards.


Even your music now, in some ways, seems like an evolved version of Grand. I’m not a believer that people have to completely switch up their work every album to show growth. You have your own sound and seem to be your own influences, and I don’t think you and Kim have ever really strayed away from that. Do you feel like it has been the same path with a few tweaks here and there since Grand?
Well, I greatly appreciate you saying we have our own sound. I came from playing in punk bands and Kim’s brother was a rave DJ, so she grew up going to to raves. We met in Brooklyn, and we’re both into noisy, weird music, but I was also a fan of big pop albums. When all of that got thrown into a blender and got my weird ass voice thrown on top of it, it became its own distinct thing. And it’s funny, for better for worse, we had a lot of tough time with radio for a long time. A lot of radio stations really like things that just fit in their playlist and [don’t] really stand out necessarily… and not be too jarring. And I feel like we’re always kind of jarring.

I struggle to come up with a “sounds like” comparison for you two. It really is its own thing, which is why I think Grand was so successful.
We’re lucky that we came up in a time of file sharing and people spreading the music to other people by just being like “have you heard this?” I don’t know that the gatekeepers at the time — you know, people who had records labels — would have embraced us. I remember even with the Grand album, at the time, Columbia Records was interested in signing us [when] Rick Rubin was the head of A&R for Columbia. They played him some some of Grand that we had completed and he felt like it wasn’t there yet. Which I completely get, because it was really lo-fi, but we decided we didn’t want to go [in a different] direction. We wanted to make it like it is, and I’m glad we did. If some of those songs got over-produced, they might not have had the charm and kind of magic they have.

It was a “if it’s not broken don’t try to fix it,” kind of thing, yeah?
Yeah, I think so. It’s weird when a band is really great and everyone’s loving their early demos and what they’re writing and they’re just doing it themselves, making it in their bedroom. And then they get signed and put together with these big producers and songwriters and it’s like, “Why are you fucking with it? It was already good!”

Absolutely. And now you guys are touring the anniversary of an album that was a product of that approach. You’re also performing it in its entirety. Is there a specific song you never played before this tour that you’ve really enjoyed playing live for the first time?
Yeah! One that comes to mind is the last song on the album called “I’ll Take Us Home.” I loved that song when we wrote it, and we had even written it back during our first demo stuff but just hadn’t recorded it. And then, especially at the time, we were probably playing 45 minute shows, tops. We already had a demo, our first album and covers too, and there just wasn’t enough time to fit it in the set. We never even bothered learning a good live version of it, and since we started doing it three weeks ago, it’s had great reaction, great energy and every is singing along to it.

As for your new music, again it kind of feels like Grand is still with you throughout your work. In “Go Go” you mention Brooklyn, Grand Street and singing the same songs. Is that by chance or is it a sign of the bigger influences lingering?
We thread things back a lot, or will call back even lyrics from [earlier] stuff. Our history and how we started out as a band was never left behind. We were this Brooklyn DIY band playing in apartments, warehouses and parties. And I think that inspired how we still do our show, just period. Even lyrically, we were so broke when we started this band, and we were happily broke, just getting to make music. Now we’ve been lucky enough to do well financially, but I still don’t think I’m a different person than I was [back then]. I probably shouldn’t, but I still wear a lot of the same clothes.

[Laughs.] Yeah?
Even on this tour I’ve been wearing this T-shirt that’s the same shirt I wore in the “Daylight” video that has this big mouth on it. And then, when we made the video for “Go Go,” we had one of the two 15 year old dancers wear that same shirt. I had to cut the sleeves off mine though because the armpits got kind of crusty after a while, but it still lives on.

Before I let you go, I have to ask — and I’m shamed to admit this because you and Kim put on a great live show — but the last time I saw you live was on the Honda Civic Tour in 2011 when you opened for Blink 182 and My Chemical Romance. Are you excited about the MCR reunion show they announced last week?
Yes! Finally. The world has been waiting. I was a big fan of My Chemical Romance pre-that tour and in my late teenage years, and when we got to do that tour it was incredible. We got to know those guys a little bit. Their whole vibe, you know… it influenced bands like 21 pilots and [others] that came after them. I hope it becomes a tour or new music, otherwise I gotta figure out how to get some scalped tickets to that show. [Laughs.]