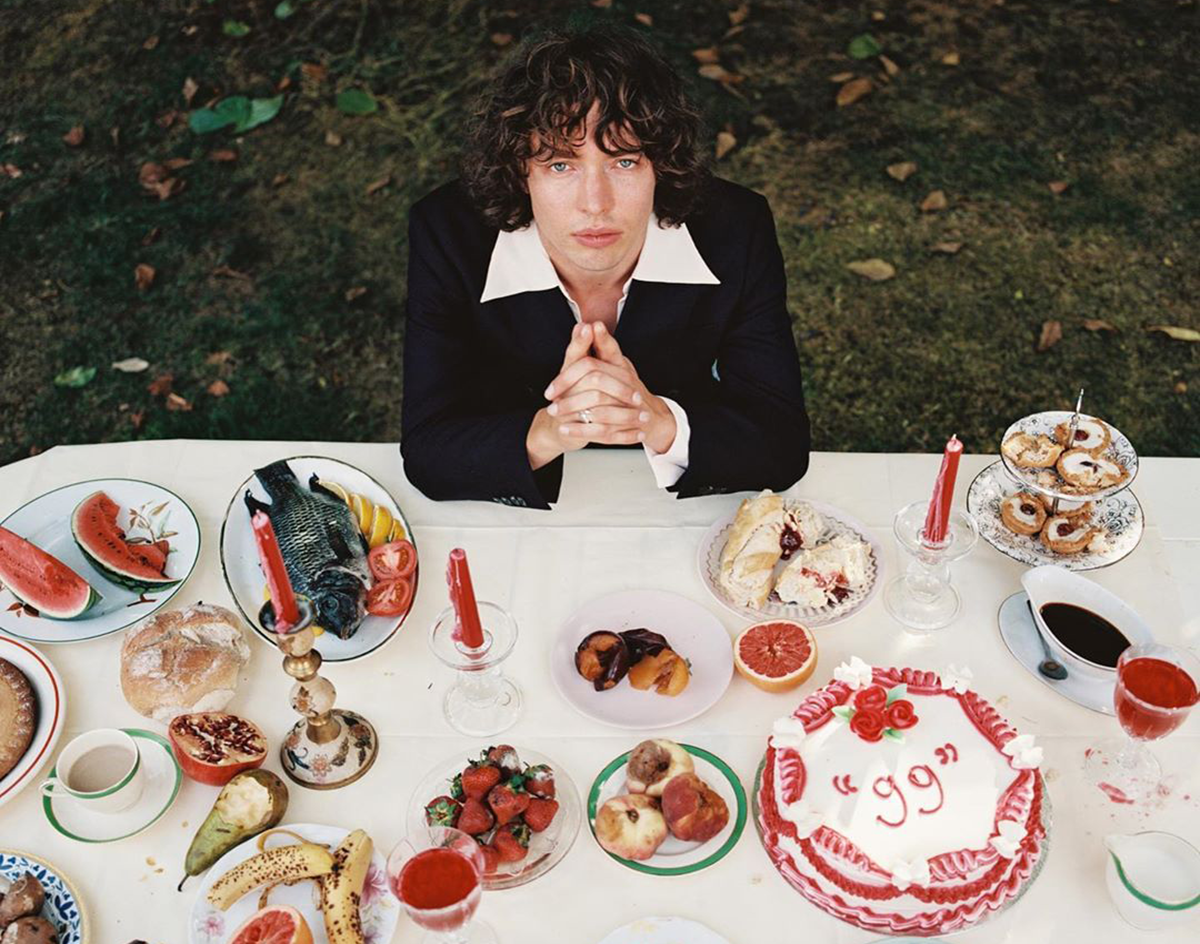 Grab Your Glitter And Gold For Barns Courtney, Run To The Hills With Iron Maiden And Experience Dope Girl Magic With Tank & The Bangas. Plus More!

The time has finally come. Remember the plans for an Area 51 raid that prompted the U.S. Air Force to issue a warning that it “stands ready” in the event that people actually do decide to charge the top secret base?

The raid was quickly turned into a festival called “Alienstock,” and just as quickly cancelled (surely in concerns of it turning into the extraterrestrial cousin of Fyre Fest) after the creator of the initial Facebook event stepped down.

As much as we would like to believe the Naruto-running heroes we didn’t know we needed will be successful in their efforts to help aliens break free, it’s probably best to expect 15 people in space costumes show up blaring EDM music.

For those of you who cannot make it to the raid, worry not. Just take a look through this list of things to do in DFW this weekend instead. — Alec Spicer

Sinkane at Three Links
Sinkane’s 2019 album Depayse will be released later this month via City Slang, and to promote this, the Sudanese-English artist will make a run through North America. Says the experimental musician on his upcoming LP: “Dépaysé is the story of an immigrant’s journey of self-discovery in the Trump era. The music is loud and raw, and it’s bursting with an energy unlike anything I’ve ever done before.” — Garrett Gravley

Marc Rebillet at Trees
Loop Daddy is performing a hometown show — and in the biggest area room he’s yet played. Virality will do that. — GG

Candlebox at House of Blues
This Seattle band is frequently associated with the grunge movement and bands such as Nirvana, Pearl Jam, Mudhoney and Soundgarden. — Stephanie Salas-Vega

Highly Suspect at Bomb Factory
This Cape Cod-based trio has been making waves in the alt-rock radio scene as of late. They sold out Bomb Factory last year, and you know what they say about history repeating itself. — GG

Ceremony at Club Dada
Since its formation in 2005, California rock band Ceremony has incrementally evolved from its hardcore and power-violence roots in favor of a more melodic, post-punk sound. The outfit just released its sixth full-length, In the Spirit World Now, in August via Relapse Records. — GG

Michael Bolton at Bass Hall (Fort Worth)
Y’know, from the Lonely Island’s “Jack Sparrow”? He was apparently pretty big in the ‘90s too. — Daniel Valdez

Crossroads Guitar Festival at American Airlines Center
“God” himself (aka Eric Clapton) is returning to this two-day DFW festival for its fifth installment. Texan guitar-slingers Gary Clark Jr. and Billy Gibbons are also part of the absolutely stacked lineup. — DV

Parking Day at Main Street District
They paved paradise and put up a parking lot. Not necessarily an event, but on Parking Day, parking lots in downtown will look a little cooler. Metered parking spaces throughout downtown will be transformed by local artists and businesses into eye-popping art installations. If you’re unlucky enough to need to park downtown that day, your best bet is Tower Garage on Elm. — DV

Rhett Miller at Dan’s Silverleaf
The Old 97s frontman usually plays a few shows around town every year, but this is his only solo North Texas date for 2019. A great song of his you might not have heard is “Pagliacci”, the theme song for the life-affirming “Hilarious World of Depression” podcast. — DV

Til Midnight at Nasher Sculpture Center
The Nasher’s monthly series of evening events is particularly enticing this time around. Local pop acts Pool Lights and PKTBK open, then Sto Elliott from The Roots headlines. On top of that is a screening of Men in Black (the first and by far best in the franchise). — DV

Bollywood at Dallas Museum of Art
The culture and legacy of Bollywood will be celebrated with live dance performances, talks with film historians and special Indian dishes available at the DMA cafe. Mango cheesecake, anyone? — DV

Chris Knight at Granada Theater
In 2006, this country singer-songwriter was named an “Honorary Texan” by then-governor Rick Perry. Pretty cool honor, regardless of if a clown gave it out or not. — DV

Ben Folds at Dallas Museum of Art
If you didn’t get to see him play a double-header with Cake this past Thursday, no worries, he will be at the DMA talking about his new memoir and signing copies, too. — DV

Methyl Ethel at Main at South Side (Fort Worth)
These aussie art-rockers are labelmates with the National. They also recorded a solid cover of the early 2000s pop classic “Cry Me A River” by Justin Timberlake. — DV

The Wldlfe at Ruins
Why do so many bands this decade have such immense hatred for vowels? — DV

OneRepublic and The Fray at Toyota Stadium
What do both of these bands have in common? Besides making music tailor-made for sad Grey’s Anatomy montages, they’ll be playing a set for Frisco’s National Soccer Hall of Fame Induction Weekend.  — DV

Fight Club 20th Anniversary 35mm screening at Texas Theatre
Fight Club has gained a bit of a reputation as a college dorm-room poster put on celluloid, or the bible for film students who think it’s edgy. But it’s genuinely a pretty cool film. — DV

Smoked Dallas at Main Street Garden Park
$50 gets you three hours of sweet meats from over a dozen Texan BBQ joints, plus access to games and performances. Just try not to puke up those baby back ribs on the mechanical bull. — DV

Tiger Army at Canton Hall
This California group rose from the same Bay Area scene as Green Day and Rancid, but instead of going full pop-punk, Tiger Army carved their own retro-futuristic-psychobilly niche. — DV

Stereolab at Granada Theater
Stereolab’s last DFW play was in 2006 at what is now known as The Theatre at Grand Prairie. Following this year’s unexpected reunion announcement, it appears that the band will pay us an overdue visit in a much more intimate setting. On that note, check out Stereolab vocalist Laetitia Sadier’s cover of Bobbie Gentry’s “Mornin’ Glory” that she did for Mercury Rev’s Bobbie Gentry’s The Delta Sweete Revisited. — GG

Enter Shikari at Deep Ellum Art Co.
Enter Shikari are notorious for their early post-hardcore sound, but given how much that entire movement has faded into obscurity, they are now mostly just an electro-pop and post-punk-influenced outfit. — GG

Barns Courtney at House of Blues
This English folk pop artist has been a bit of a radio indie darling as of late, having been tacked onto opening tour slots for acts such as the Kooks, Elle King (whom Courtney performed with at House of Blues in Dallas earlier this year), The Wombats and Fitz & The Tantrums. He’s clearly paid some dues, and it has elevated him to headlining a show at House of Blues on a Saturday. — GG

Crumb at Gas Monkey Bar N’ Grill
Crumb has been described by Pitchfork as, “Eerie, disorienting, [and] trippy.” NPR referred to its single “Nina” as an “intoxicating blend of jazz and woozy ’60s psych-pop.” We could easily compile an Infinity Gauntlet of positive press the Brooklyn quartet has received, but suffice to say, the band is becoming an indie darling. — GG

The Messthetics at Three Links
This band is 50 percent of Fugazi. Ian MacKaye and Guy Picciotto aren’t part of that 50 percent, but it’s still sick. — GG

Tank and the Bangas + The Suffers at Tress
You may have seen the former at this year’s Fortress Festival, and you may recall the latter had some equipment stolen following its set at this year’s Homegrown Fest. We hope misfortune decides to sit this one out and just let these two go on this stellar co-headline tour in peace. — GG

Mike Dixon at Industry Alley Bar
Mike Dixon is coming down south — South Lamar, to be exact — for a night of Chicago house music. Demarkus Lewis and Brian Knolley open. — AS

Deep Ellum Open Studios
For one night only, various studios and creative spaces belonging to artists, musicians and makers will be open to the public. It ends at 7 p.m. so not a bad set to check out before heading to a show in the neighborhood. — AS

Beats Without Borders at Double Wide
Blu H3ron, David Morgan, Lavoyce and Yung Wave will anchor the show, with proceeds going to RAICES, an organization that assists immigrants and undocumented workers. — AS

Peter Frampton at The Pavilion at Toyota Music Factory
By way of tragic announcements, CBS News reported that Peter Frampton was diagnosed with a degenerative muscle disease that causes his muscles to gradually weaken over time. Long story short, his voice will not be affected, but moving around will be a challenge, and so the English rock legend will sadly bid us farewell on this tour. Jason Bonham’s Led Zeppelin Evening opens. — GG

The Early November at Club Dada
There was a time when this band headlines shows at House of Blues. This has clearly not been a good decade for bands of its ilk. — GG

Drew Gooden & Danny Gonzalez at House of Blues
These two comedians got their start on Vine (RIP), then ballooned in popularity by making goofy Youtube videos lampooning the dregs of internet culture. They’ll be performing live comedy alongside fellow Youtuber Kurtis Conner. — DV

Pharmakon at The Nines
No better omen for the work week than crushing death industrial. Her album cover, where she’s covered in maggots (2013’s “Abandon”; not embedding it, you’re welcome) still ranks as possibly the gnarliest of the decade. — DV

Dorian Electra at Deep Ellum Art Co.
The latest in the fast growing ranks of up-and-coming queer pop stars. Their videos are stylistic tour-de-forces, so hopefully their live show will be too. – DV

Finish Ticket at House of Blues
These Bay Area pop-rockers have opened for Twenty One Pilots and The Black Keys, but they’re headlining this time around. — DV

Thor at Three Links
As far as Canadian heavy metal bands fronted by former bodybuilding champions go, Thor might place in the top five. Here’s an absolutely bonkers clip of the frontman singing and blowing up a balloon on a ’70s variety show. — DV

The Hussy at Ruins
According to the band’s hometown paper, this band’s frontman has lit his guitar on fire onstage nearly 100 times. We’ll see if he adds to that total at Ruins. — DV