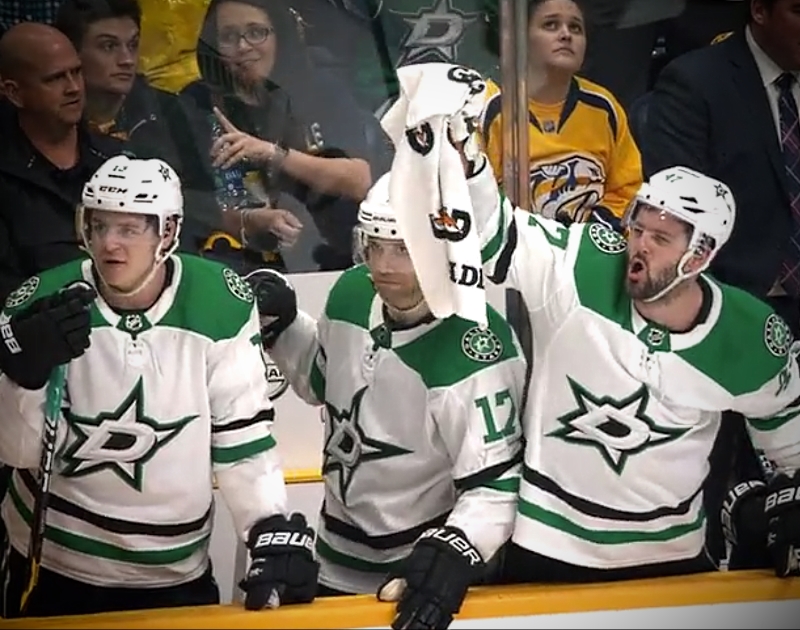 A famous 1975 Stanford psychology study that you’re probably somewhat familiar with, involving the predicting of real and fake suicide notes, is still relevant today. Its findings are that facts don’t change our minds. We can be presented with all the irrefutable evidence in the world, and none of it matters as much as our initial perception.

So, no, maybe this following packed schedule of the week’s events won’t necessarily convince you to get out of the house these next few days. But if you’re already of the belief that fun isn’t wholly relegated to weekends, than let this be your guide. — Cory Graves

DMX at House of Blues
DMX got released from prison earlier this year after serving a sentence for tax fraud, and now he’s playing Dallas on Tax Day to celebrate the 20th anniversary of It’s Dark and Hell is Hot. We’re the only city on his comeback tour that gets to enjoy this irony! — Garrett Gravley

Dallas International Film Festival
Freaks, Goldfinger, Adonis Complex and a Beto campaign doc are among DIFF’s Monday highlights. Hit the link above for the full list of screenings, times and locations. — CG

NHL Playoffs: Dallas Stars vs Nashville Predators at American Airlines Center
Your boys in Victory Green™ head into game three of the series tied at 1-1, looking use the home ice advantage and support the Havoc Fanatics to edge ahead. — CG

Whitesnake at The Bomb Factory
It’s 2019 and the ‘80s rockers responsible for the Tawny Kitaen video trope are actually on tour promoting a brand new album that’s coming out in May. — CG

Lil Debbie, DEV at The Prophet Bar
Ladies from the Bay Area are in town, and what’s not to love about independent artists, models, fashion designers and female rappers? — Mira Scott

Jesse at Dada (Sold Out)
Jesse Rutherford of The Neighbourhood fame has had sparse output as a solo artist, having only released two albums in the span of seven years. Now he is performing solo under the mononym “Jesse” and is scheduled to come through Dada as part of his first tour sans The Neighbourhood. — GG

Selena Day at Legacy Hall
On Quintanilla-Perez’s actual birthday, the Box Garden at Legacy Hall in Plano scored itself quite the coup, booking the revered, Austin-based Selena tribute act Bidi Bidi Banda for a big ol’ bash on what would’ve been the performer being honored’s 48th birthday. This party is also free to attend with an RSVP. — Pete Freedman

Dallas International Film Festival
Screening of NTX music scene darlings This World Won’t Break and Alice Cooper, Live from the Astroturf are among DIFF’s Tuesday highlights. Hit the link above for the full list of screenings, times and locations. — CG

Dallas Cooper at The Magnolia
In conjunction with the Live from the Astroturf doc mentioned in the DIFF blurb above, a local Alice Cooper tribute act will perform between 7:30 and 8 p.m. They will even have a very special guest (among others), Dennis Dunaway, an original member of the Alice Cooper group. — MS

Spinster Records Presents: Vive Selena
Gone but never forgotten, Selena will forever be the Queen of Tejano. And Spinster Records is celebrating Selena’s life and legacy with a performance by Mellow Ann, drinks, vinyl and more. — MS

Paints and Pints Willie Nelson Painting Workshop at Magnolia Motor Lounge
It’s like a sip and paint, except, you’re not just painting a sunset or bouquet of flowers, you’re painting a portrait of The Red-Headed Stranger. With the perks of a couple drinks, food and good company. — MS

Family Of The Year, Hollis Brown at Trees
Family Of The Year is quietly captivating a combination of idyllic instrumentation and emotional storytelling within each of their songs. And so far, the group has been earing praise from USA Today, Entertainment Weekly and the like. — MS

Princess at Top Ten Records
Princess is a collaboration between Alexis Gideon and Michael O’Neill that uses music as the backbone of a multi-disciplinary practice. This psychedelic duo isn’t afraid to explore queerness and the concept of masculinity. Sounds like a force to be reckoned with. They released a self-titled LP back in 2006, took a break to follow individual pursuits, and have now returned for this same project. — MS

Jack and Jack at House of Blues
Remember Vine? Jack and Jack are counting on you to, as that’s precisely where these two first started to take off. Jack and Jack are childhood friends that make up this pop-rap duo hailing from Omaha, Nebraska. They debuted their first single, “Distance,” in 2014 and since then, they have released 13 singles (and counting) altogether. — MS

Cheers to New: Cooties at The Wild Detectives
Cheers to New! is a staged reading series that features new plays and a drinking game. This month’s play is Cooties by Alexandrew Recore. “In a crummy college apartment, three crummy relationships blossom into something less crummy. A fast-paced-sitcom-romcom variety show about truly ugly love.” — MS

Strand of Oaks at Three Links
The project of singer-songwriter Timothy Showalter announced a North American and European run in conjunction with the announcement of an upcoming LP featuring Jason Isbell and members of My Morning Jacket. Brent Cowles opens. — GG

Dallas International Film Festival
A repeat screening of Alice Cooper, Live from the Astroturf, plus Diamantino, Sorry Angel and Wild Rose are among DIFF’s Wednesday highlights. Hit the link above for the full list of screenings, times and locations. — CG

VideoWaves / Falkner’s 50th at The Nines
The freaks and fetishists will come out at night to pay tribute to their figurehead’s 50th — a video dance party a half-century in the making. — CG

Doobie at Cambridge Room
The “When the Drugs Don’t Work” rapper, and leader of the Ohio Hip-Hop Renaissance hits HOB’s small room on this stage of his quest. — CG

Dreaming in Horror Spring Meeting at BackYard on Bell
For all the gore and horror fans who feel like they’ve seen every movie the genre has to offer, feel welcomed to attend Dreaming in Horror. It’s a Horror Film Club and meeting that will present you with a beautifully spooky time. Also, live music from Springtime and the Changes will fill the air. — MS

Haley Reinhart at Dada
When she turned nine-years-old, Reinhart’s musician parents just so happened to be performing at a tattoo convention. When she got on stage to join them for a LeAnn Rimes song, the crowd and tattoo machines went silent. Everyone was transfixed on Haley. “I was so overcome by it, I cried right afterward, but they were happy tears,” the onetime American Idol contestant said after. Originally from Chicago, Reinhart, was born into a musical family, and she’s been performing ever since. — MS

Fast Times at Ridgemont High at Sundown (Free)
Watch as a young Sean Penn sticks it to the man, man. – Obed Manuel

COMMU.N.I.T.Y No. 4: Healing the Hood at The Wild Detectives
Intersectional feminist, poet, Melania-Luisa Marte returns with the second installment of her new culture-based talk show. This month’s special guest is Brand Waller. He owns Bam’s Vegan, which is a plant based pop-up located in Dallas. Tonight’s theme? “Healing the Hood,” which will focus on how transforming the conversation around food transforms the community and better equips folks to uplift, educate, and create balanced lives for future generations. — MS

In the Valley Below Presents: The Pink Chateau at Alamo Drafthouse (Cedars)
You may have seen In the Valley Below open for Tricky at Curtain Club in 2017 (which is a bit of an odd pairing, but I digress.) Well, they now have a feature-length film titled The Pink Chateau, and the duo will be embarking on a tour of Alamo Drafthouses across the country, where they will perform the album/score as the film plays. — GG

Snow Patrol at South Side Ballroom
Snow Patrol made a name for itself in the post-Britpop scene some 15 or so years ago, drawing inspiration from such adored acts as Radiohead, Oasis and Pulp. The band achieved mainstream success in 2006 following the release of the single “Chasing Cars,” and has been praised by elder musicians such as Ozzy Osbourne and Michael Stipe. Neat! — GG

Lil Mosey at Canton Hall
Lil Mosey is a 16-year-old rapper who has garnered over 22 million hits on YouTube with the song “Pull Up,” and over 143 million streams on Spotify with the song “Noticed.” Feeling unaccomplished yet? — GG

Reagan Youth at Three Links
The Queens-based hardcore punk band went through numerous lineup changes following the passing of vocalist Dave Insurgent in 1993. In 2006, guitarist Paul Cripple (not a really PC stage name these days) reunited the band, and has been going through a revolving door of members ever since. — GG

Dungeon Family Tour 2019: Starring Big Boi, Goodie Mob and More at The Bomb Factory
The morning following his set at the otherwise insipid Super Bowl halftime show, the hip-hop legend and Dirty South pioneer who also comprises 50 percent of OutKast announced a tour that includes this stop at Bomb Factory. If you were planning on seeing Big Boi’s Halloween show at Canton Hall before it got canceled, here’s another chance. — GG

Thousand Below at The Prophet Bar
The post-hardcore rockers disembark into the dreamy depths of loss, love, and life. — MS

Chelsea Handler’s Sit-Down Tour at Majestic Theatre
Last week, the comedian, talk show host and bestselling author released a new memoir, Life Will Be the Death of Me, promoting the sucker with a 16-day run where she’ll share humorous true stories from the book. She’s also bringing Connie Britton along as a bonus guest. Don’t get up. — GG

El Conjunto Nuevo Ola at Ruins
This Los Angeles-via-Mexico sextet’s name translates to “The New Wave Band,” which is an apt description of their sound. They have original cuts, but have also made a name for themselves performing reimagined variations of songs such as “Anarchy in the UK” and “My Sharona.” — GG

Relaxer – The Y2k Pac-Man Faygo Challenge Movie at Texas Theatre
Thinking that Y2K would bring about the apocalypse, Abbie is challenged by his brother not to get off the couch until he passes the infamous level 256 in Pac-Man. And this is exactly where his survival story begins; inside a decaying living room, with no traces of food or water, and a whirlwind of familiar faces coming and going as they please. Try to sit through the whole thing without getting up to pee. Oh, and the soundtrack was provided by Neon Indian. — MS

Dallas International Film Festival
Screenings of Jaddoland, The Biggest Little Farm and The Death of Dick Long are among DIFF’s Thursday highlights. Hit the link above for the full list of screenings, times and locations. — CG

The Black Angels at Toyota Music Factory|
It’s just $5 to see the Austin psych staples and their Denton disciples in Pearl Earl if you buy tickets online in advance. It’s still just $10 at the door, though. — CG

Cradle of Filth at House of Blues
Assuming the role of dark metal diarist, Cradle of the Filth, drop their 12th studio album, Cryptoriana: The Seductiveness of Decay, hitting the HOB this week in support. — MS

Etana at Gas Monkey Bar N’ Grill
Since debuting in 2006 with her single, “Wrong Address,” the Jamaican-born singer established herself as a force to be reckoned with. In a genre that has been male-dominated, she has created a distinctive and powerful voice in reggae. Her name even means, “The Strong One” in Swahili. — MS

Omicron J Trauma (EP Release) at The Blue Light
You don’t often hear Dallas bands playing power pop in the vein of Cheap Trick, Sloan and the Posies. But Omicron J Trauma is an exception, and this young group continues the tradition of jangle with attitude on their newly-released, six-song debut, You Should Have Thought About That. Which you can stream/hear us wax more about here. — Eric Grubbs