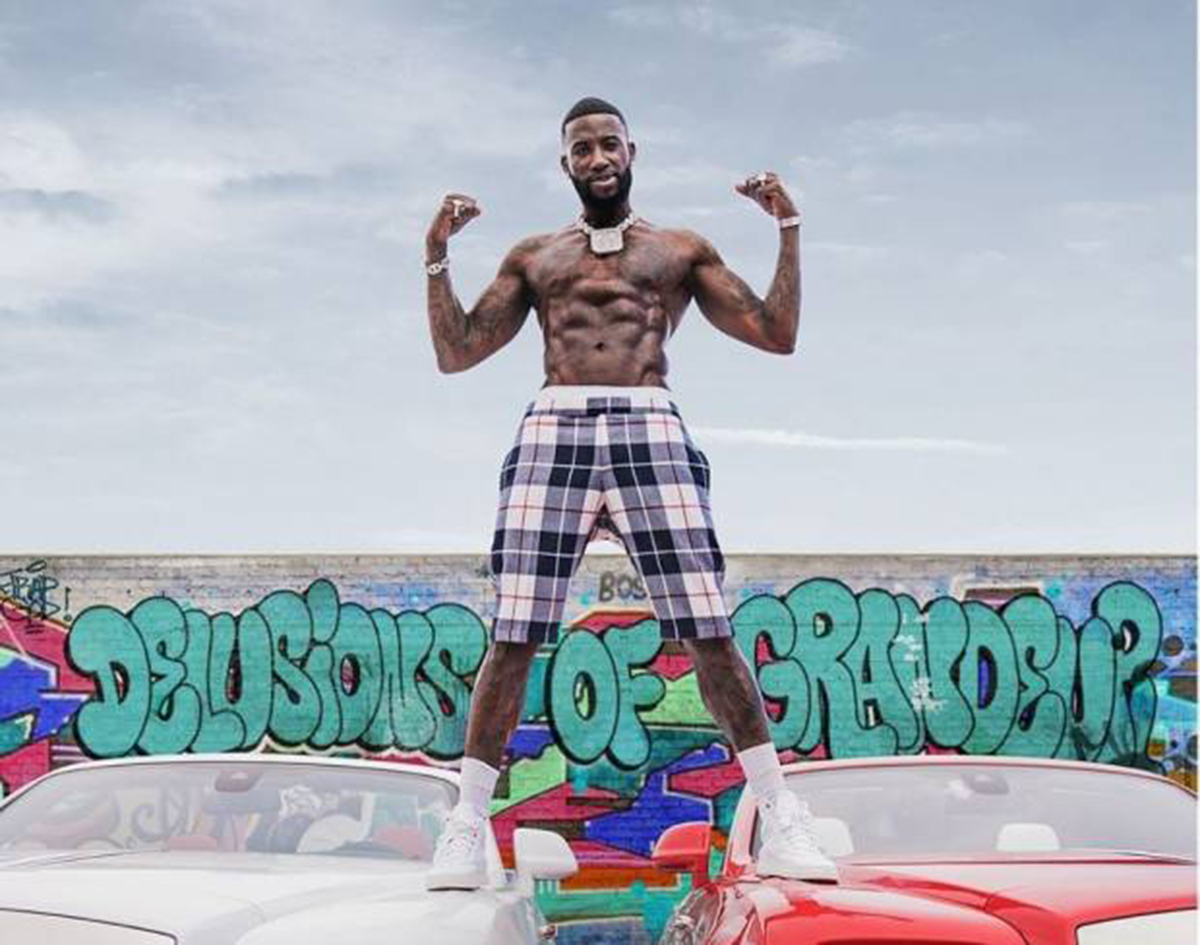 Get Delusional With Gucci Mane, Live Your Best Golden Life With Jill Scott, Cheer Up For Sad Summer Festival And So Much More.

This week, Disney announced Halle Bailey has been cast as Ariel for the upcoming live-action take on The Little Mermaid. Bailey, who is one half of R&B duo Chloe x Halle, said the role is her dream come true.

She’s also black, and as you can probably guess, the racists were triggered by the news.

“Ariel should be white” some twitter users wrote.  Another tried to guise the issue as being about the (completely fictional) mermaid’s iconic red locks. “Ariel is a GINGER. To me it’s not about race.” So, um, now racists are pretending they don’t know what wigs are, I guess.

Chances are Bailey isn’t losing any sleep over it though, especially after receiving a shoutout from her fellow Halle.

In case you needed a reminder… Halles get it DONE. Congratulations @chloexhalle on this amazing opportunity, we can’t wait to see what you do! #TheLittleMermaid #HalleBailey pic.twitter.com/z0Rik2nxRe

We’re hoping they cast Janelle Monáe as Prince Eric next.

To quote everyone’s favorite purple, drag queen-inspired octopus villain, “Life is full of tough choices, isn’t it?” This list of things to do in Dallas this weekend is no exception.

Amanda Seales at House of Blues
Amanda Seales wears many hats: musician, comedian, radio disc jockey and former actor. She was briefly affiliated with R&B duo Floetry, and as of two years ago, pursued a comedy career. Fresh off the heels of her HBO comedy special I Be Knowin’, the artist formerly known as Amanda Diva comes through Dallas as part of her “Smart, Funny and Black” tour. — Garrett Gravley

Faster Pussycat at Trees
There was a time in the ’80s when the Sunset Strip was a thriving hotbed for emerging acts. This band is a relic of that era. — GG

Femme It Forward Concert Series at The Pavilion at Toyota Music Factory
Faith Evans recently finished an album that was long left undone due to the untimely death of her husband, Notorious B.I.G. Now, she is finally getting a chance to take it on tour with Jill Scott and Tweet. — TM

Sad Summer Festival at Gas Monkey Live!
Listen, it’s hot outside and climate change is tightening its grip on our necks, so that’s plenty to be sad about. But, if you need to take your mind off our impending doom, this lineup including State Champs and The Maine might help. — AS

Carnage at StereoLive! Dallas
Carnage is a DJ from Guatemala who illegally crossed the southern border as a child, which he chronicled in is his music video for “Letting People Go.” Powerful stuff, given what’s going on at the border today. — TM

Warbly Jets with Signed Out at The Foundry
The Warbly Jets’ Facebook lists the band’s interest as making noise. Which, yeah, we would hope so. — TM

The Departed at The Blue Light
The Departed is an alt-country band fronted by former Cross Canadian Ragweed vocalist Cody Canada. You might say it’s a departure from what he’s known for. — TM

Vansire x BOYO at Club Dada
Vansire is a duo from Rochester, Minnesota made up of Sam and Josh, who are just two friends that make music and enjoy coin collecting in their spare time. How wholesome. — TM

Jay Whitecotton at Hyena’s Fort Worth
Jay Whitecotton has a deep and abiding passion for all things nerd, such as Star Trek and Dungeons and Dragons, which can easily be recognized in his unique comedic style. — TM

David Allan Coe at Ridglea Theater (Fort Worth)
The legendary David Allen Coe is a mix of blues, rock and country music that you cannot miss. So if your boss won’t give you the day off after the holiday, tell them to “Take this job and shove it.” — TM

Santana & The Doobie Brothers at Dos Equis Pavilion
This year, Santana is celebrating the 20-year anniversary of his album Supernatural (which, yes, includes the meme-worthy song “Smooth,” featuring Rob Thomas) and the 50-year anniversary of his performance at Woodstock. As far as we know, The Doobie Brothers don’t have any significant milestone anniversaries this year, so they better fulfill everybody’s fantasies and get Michael McDonald and Kenny Loggins on stage with them for “What a Fool Believes.” — GG

Ne-Yo and Tamia at Music Hall at Fair Park
Ne-Yo and Tamia going on tour together is kind of like cheesy bread. No one necessarily asked for it, but once you’re made to think about, it’s not a bad idea. — Jessika Hardy

Truth in Comedy at Full City Rooster Coffee Roasting Studio
This has to be one of the most unique artistic experiences in Dallas. Three people will tell a deeply personal and truthful experience about their life, then, a comedian will interpret these events with a stand-up performance and finally, an artist will present a triptych they created inspired by the stories. — TM

Fitz and The Tantrums at the Pavilion at Toyota Music Factory
Fitz & The Tantrums played the Wildflower Festival in Richardson earlier this year, which likely means their best days are behind them. No disrespect to the band or the festival, but c’mon, you have to admit that the festival isn’t exactly known for landing acts that move the needle. — GG

The Nirvana Experience at Lava Cantina
All the self-proclaimed Nirvana fans who were born after 1994 now have the chance to see a tribute to the iconic grunge band on stage. A tribute band is always better than nothing, right? — SSV

Gucci Mane at Gas Monkey Live!
Gucci Mane goes by many names — Guwop, Gucci Mane La Flare, Mr. Zone 6, Wizop and Radric Delantic Davis. I am not sure which is on his birth certificate, but I could probably guess. — TM

Jason Davis and Friends at The Common Table
Jason Davis is a composer and tenor saxophonist who is breaking out on his own and with a new solo album that combines jazz with funk. — TM

Cazzette at Stereo Live!
Cazette was formerly a swedish electronic dance music duo made up of Alexander Björklund and Sebastian Furrer, but now it’s just Alexander performing solo. That makes him “ett” in Swedish. — TM

Hamell on Trial at Dan’s Silver Leaf (Denton)
Hamell on Trial is a punk rock concert mixed with a comedy exhibition and a little bit of a political statement, of course. — TM

The Cush at Twilite Lounge (Fort Worth)
Fort Worth’s very own psychedelic indie-space rock band The Cush will be giving a free, transcendental show. — TM

Rose Garden Funeral Party & Springtime and the Changes at Harvest House (Denton)
This pair of local post-punk synth rock bands is the perfect lineup for a town like Denton. — TM

Will Johnson at Andy’s Bar (Denton)
Kennett, Missouri native Will Johnson has been called “one of the most prolific artists in American indie rock” and he has Texas roots, having began his career in Denton while a student at the University of North Texas. — TM

Rod Melancon at The Blue Light
Rod Melancon has a new album out called Pinkville, which tells the story of “greasy gothic Americana” using an electric guitar and Melancon’s voice.  — TM

Independence Party at Double Wide
Whiskey Jar A Thin Lizzy Tribute and Straight Tequila Night will be serving us another shot of patriotism the day after the holiday. — TM

Wooden Earth at Three Links
Wooden Earth calls themselves as “Dallas, Texas riff merchants.” We’re not sure exactly how much they charge for riffs or if payment plans are available, but a ticket to the costs about 10 bucks. — TM

Margaret Chavez at Twilite Lounge (Dallas)
Margaret Chavez is a new adventure for veteran recording artist Marcus Striplin. He dons the stage name as a tribute to his mother and will be performing his new album that shares the namesake. — TM

Greg Schroeder at Adair’s Saloon
This Texas singer-songwriter recently starred in the independent film “This World Won’t Break” about a tireless and dedicated musician. Life really does imitate art. — TM

Mo3 at House of Blues
Dallas-based rapper Mo3 is an up-and-comer in the underground rap scene. One facebook review says “His music is amazing, he up next PERIOD.” — TM