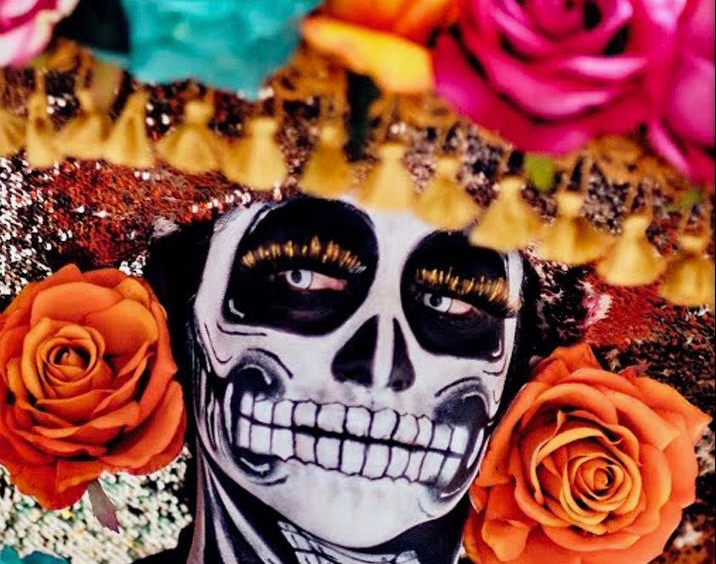 Be A Part Of Dallas’ First Día De Los Muertos Parade, Be KNON’s Friend With Benefits & Let Asian Doll Be The Queen Of Your Nightmares. Plus More!

Halloween may be another week away, but since this is the last weekend leading up to it, consider the next couple of days your Halloween pre-game.

Obviously you’re more than free to party hard this next Thursday, but calling in “sick” to work the next morning isn’t a very flattering look.

And might we remind you, if you decide to wear a costume while out on the town, at the very least, try and make sure your outfit isn’t horrifically offensive. It’s the bare minimum, if we’re being honest. And even if you put the slightest amount of thought into it, you’re way ahead of a cheer camp in Southlake that essentially pantomimed police brutality.

During the deeply ill-advised sketch, a girl wearing a mask eerily reminiscent of blackface runs away from a kid in a cop costume, then the “cop” tackles her to the ground and arrests her, all the while the theme from Cops blares in the background. Yeesh.

We’d like to say that using Halloween as an excuse for overt racism is a rarity in North Texas, but who are we kidding? Halloween and horrific decisions seem to be intrinsically intertwined.

It doesn’t have to be that way, though!

Make smarter, cooler choices this weekend with the help of this list of fun things going on around DFW. — Daniel Valdez

Nate Bargatze at Majestic
Back in 2012, Marc Maron shouted him out in Rolling Stone as a comic who should be big. Considering Bargatze is playing venues the size of the Majestic, it looks like Maron’s wish came true. — DV

Delta Rae at Deep Ellum Art Co.
North Carolina folk outfit Delta Rae reached their mainstream peak in 2012 following the release of their single “Bottom of the River.” Call them one-hit wonders all you want, but have you played Farm Aid or collaborated with Lindsey Buckingham? Of course not. — Garrett Gravley

Mike Watt and the Missingmen at Three Links
Mike Watt (Minutemen, fIREHOSE, The Stooges) is the most hardworking touring musician out there — and that isn’t up for debate. Case in point: He’s playing Three Links as part of a six-week tour that has zero days off. Oh, and he’s in his 60s. So, y’know, that’s even more impressive. — GG

Freakers Ball at Dos Equis Pavilion
Marilyn Manson is bored and old and headlining this package tour with Bush and Filter. Teenage angst has paid off well. — DV

Nahko and Medicine for the People at Canton Hall
In an era where hippie-dom seems to have been completely corporatized and bastardized like the Burning Man festival, it’s heartening to see this independent, world-music collective walk the walk. – DV

Grün Wasser at Dada
Imagine if Crystal Castles ditched that abuser creep dude and teamed up with The Knife instead. That record might sound like this industrial techno duo. — DV

Shaq’s Bass All-Stars at Stereo Live
We all know Shaquille O’Neal as an acclaimed rapper with an obscure side gig as a basketball player, but did you know he’s an EDM DJ too? Under the name DJ Diesel, he drops bass like he used to drop free-throw attempts. He’ll be performing a set along with other DJs like 1788-L. — DV

80’s Halloween Slash-Back Party at Gas Monkey Bar N’ Grill
One of several spooky shindigs happening this weekend features a costume contest, drink specials and the ’80s tribute band Teen Wolves. From what we can tell, Teen Wolves are neither teenagers nor wolves, but we’re intrigued nonetheless. — DV

Zac Brown Band at Dos Equis Pavilion
Say what you want about Zac Brown, but it is a satisfying feeling whenever you wear jeans that fit perfectly. And he’s one of the only artists out there singing about that. — GG

Shin Lim at Majestic Theatre
Back in the ancient era of February 2019, this magician won the Champions edition of America’s Got Talent, beating out Susan Boyle (probably the only other AGT winner most people have heard of). Think Penn & Teller, but less smug. — DV

AFFRIMA 2019 at Bomb Factory
Bomb Factory will be host to the sixth annual African Muzik Magazine Awards ceremony. Per the engagement’s website: “AFRIMMA 2019 is going to be the best experience ever with a full weekend of activities lined up including welcome party, fashion show, meet and greet sessions, red carpet, award ceremony, music festival, after party and lots more. The rich and glorious culture of motherland Africa in the language of the culture and in the colors of the continent on the international stage. Get ready to be a part of history!” — GG

Moonchild at Trees
It’s hard to tell what this band was named after, as there is a horror film titled Moonchild, as well as songs of the same title by Captain Beefheart, Chris Cornell, M83, Iron Maiden, King Crimson, Rick James and Fields of the Nephilim. — GG

Blue Velvet 4K Screening with Pinkish Black at Texas Theatre
One of David Lynch’s most twisted cult classics in a career full of them. Keep your ears attached to your heads, because following the show will be a set from Fort Worth new-wavers Pinkish Black. — DV

Dane Cook at The Pavilion at Toyota Music Factory
Dane Cook was the Nickelback of early 2000s stand-up comedy: hugely successful, yet ceaselessly clowned on by critics. His star’s cooled off some since then, but plenty of comics would kill to play a 4,000 person venue like the Toyota Music Factory. — DV

Insane Clown Posse at The Rail Club (Fort Worth)
ICP and their Juggalo fanbase were another easy punching-bag in the early 2000s. So much so, they’re now labeled as a gang by the FBI. All that aside, they’ve kept a subculture thriving off sheer hustle and Faygo soda for a quarter-century, and that’s something to respect. — DV

Kingdom Hearts Orchestra at Theatre at Grand Prairie
Kingdom Hearts 3 took an excruciating fourteen years to come out; fortunately, the orchestra dedicated to the series’ music won’t be waiting nearly as long to celebrate. — DV

Mid-Century Modern Horror at Dallas Museum of Art
If you’re hungry for Halloween viewing aside from ’80s slasher flicks and Hocus Pocus, the DMA’s got your back. They’ll be presenting Roger Corman’s A Bucket of Blood, the British classic Peeping Tom and finally, an advance screening of the new A24 release In Fabric. — DV

Double Wide Halloween Bash
Double Wide is hailing Halloween with a costume contest, a drag spooktacular and live tribute acts to Hall & Oates, Weezer and the Jesus and Mary Chain. If they wanted to be truly horrifying, the Weezer cover band could focus solely on their post-Green Album work — DV

Gorehounds at Three Links
Another downtown staple, Three Links, is hosting their own Halloween bash. Headlining is Cramps tribute act The Gorehounds. — DV

Día De Los Muertos Parade & Festival
Dallas’ first ever Dia de Los Muertos parade is set to be one of the biggest in the state. We spoke to the festival’s head organizer about the event’s goals and significance last month, if you’re curious. — DV

Suffocation + Belphegor at Gas Monkey Bar N’ Grill
The technical death-metal pioneers may have switched lead singers this year, but the Suffocation show must go on. For this go-around, they’re co-headlining with fellow death-metal group Belphegor. — DV

Mo Lawda & The Humble
Philadelphia has been a hotbed of new indie rock this decade, from The War on Drugs to Hop Along. This Philly group is more pop-friendly in their song-craft and production, but that cred still counts. — DV

Cavetown at Granada Theater
If you’re into those quaint YouTube personalities that do ukulele covers, this will definitely be in your wheelhouse. — GG

Asian Doll at Club Dada
Hip-hop’s toy chest is filled with doll MCs at the moment, from Cuban Doll to Kash Doll, but Dallas’s own Asian Doll particularly stands out among the Barbie girls. — DV

La Santa Cecilia at Canton Hall
This hyper-eclectic Mexican-American band blends Latinx sounds like Mariachi and Cumbia with rock and blues. Their video lamenting the plight of undocumented immigrants, “Ice El Hielo,” has only become more relevant since it dropped back in 2013. – DV

Book Tour with Babish at AT&T Performing Arts Center
The creator of the hit Youtube cooking show Binging With Babish has just released a cookbook with various recipes from the show.  If you’re not hungry before the set, you certainly will be afterwards. — DV

KNON & Foundation 45 Benefit at Three Links
A bevy of local punk acts like the Dolly Llamas stack this benefit bill. Minimum-suggested donations of $5 will go toward community radio station KNON, which was severely damaged by last Sunday’s tornadoes, as well as mental health organization Foundation 45. Why not be a rebel with a cause? — DV

The Spill Canvas at Hose of Blues
For those out there with Motion City Soundtrack hoodies still buried deep in their closet, South Dakota’s defining contribution to third-wave emo is back in Dallas. — DV

The Midnight Hour at Shipping & Receiving (Fort Worth)
Ali Shaheed Muhammad from A Tribe Called Quest and jazz composer Adrian Younge have combined their forces to create a 10-piece instrumental ensemble called The Midnight Hour. Squeeze some soul into your Sunday night. — DV