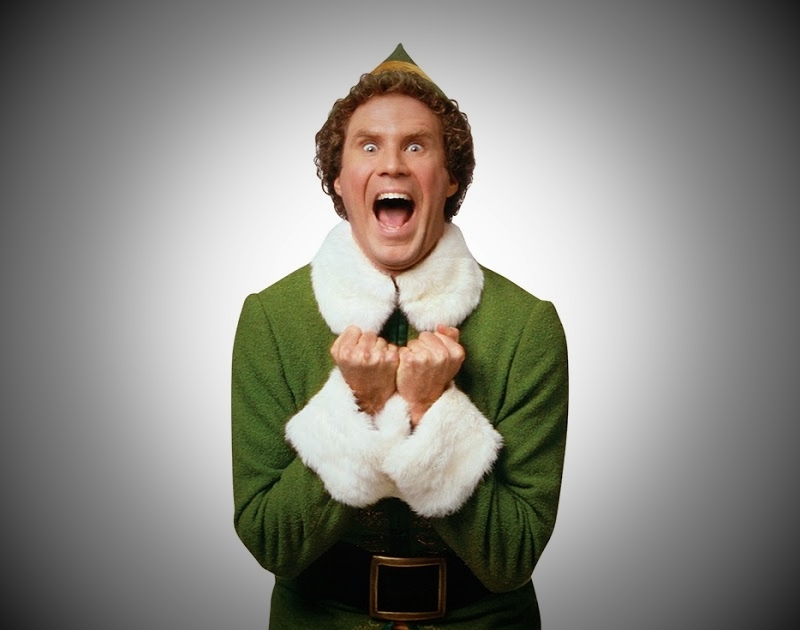 Find Your Dad at Elf: The Musical, Get Closer to God With Nine Inch Nails, Feel the Thunder Down Under, or Nom on Some Wagyu Beef.

There’s an emoji for everything these days. A method for expressing almost any sentiment with a single click.

Sometimes the emoji keyboard doesn’t have the exact right way to convey what’s in that weird little brain of yours. In that case, you’ll have to make your own emoji. Which is fine, because there’s an app for that.

So while there’s not an icon that means “all the best ways to spend your week in Dallas are listed here below” just yet, we’ll get right on that.

Thunder From Down Under at House of Blues
Australian for “Magic Mike.” — CG

The Maltese Falcon at Alamo Drafthouse (Lake Highlands)
Fans of the classic film noir genre rejoice! Join Humphrey Bogart and Mary Astor in a tale of deception, love and greed. This 1941 adaptation of Dashiell Hammett’s novel of the same name is directed by John Huston and was nominated for best picture and best screenplay at the 1941 Academy Awards. — Diamond Victoria

The Standard Pour’s Bar Brawl
The McKinney Avenue bar is rolling on with its bracket-style competition to determine Dallas’ best cocktail shaker. Even better, these late-round matchups will see winners vs winners. Discount and complimentary drinks are yours for the taking. — CG

Uncommon Ramen w/ Chef Omar Flores at Uchiba
Known more for the chicken and biscuits he whips up at Whistle Britches, Flores will bring some of that peronality to Uchiba’s recurring outside-the-box ramen dinner. — CG

The Sound of Music at The Magnolia
The hills are alive for this classic Big Movie screening. — CG

Esperanza Spalding at House of Blues
Words like “prodigy” and “genius” get casually tossed around in these hyperbole-rich times we live in, but, in Esperanza Spalding’s case, we think they’re totally fitting. She first picked up the bass at age 15, dropped out of school and enrolled in college at age 16, graduated from there at age 19, and began teaching at Berklee College of Music at age 21. — CG

Nine Inch Nails at Toyota Music Factory
Because “the promise of a world made better by computers and online connectivity has failed us in many ways,” says NIN’s Trent Reznor, only physical tickets are available for the shows on this tour, and they’ve got to be purchased in-person at the venue. Daniel Avery and The Jesus and Mary Chain open. — CG

KISS-FM Jingle Ball at American Airlines Center
Always one of the biggest concerts of the year, these Kiss-FM winter tours always somehow pack all of the biggest and best-selling current radio stars all onto one bill. To wit, Calvin Harris, Alessia Cara, NF, Bebe Rexha, Bazzi, Sabrina Carpenter and Ryan Cabrera are all on this one. — CG

The Story So Far at The Bomb Factory
Founded in early 2007, the California natives found each other after leaving failed pop rock projects and now have have three studio albums and a few EPs under their belts. That’s really the band’s story so far… — Lauren Kuening

Elf: The Musical at Music Hall at Fair Park
Through the weekend, Dallas Summer Musicals is staging a musical version of the Will Ferrell holiday favorite. — CG

Demolition Man at Alamo Drafthouse (Cedars)
To prepare you for the opening of the Creed sequel, Stallone gives us a refresher on how to use the three seashells. — CG

Queen Naija at Granada Theater
Per Fader, the 23-year-old former YouTuber is a master of the “scorched-earth breakup song,” which would classify her two big hits this fall. — CG

-Topic at Three Links
While back in Dallas for a spell after moving to San Francisco (where he’s become the rapping hype man for soundscape artist Flying Lotus), -Topic has performed as part of Aurora, filmed a pilot for a TV show he hopes to soon sell and booked this free Wednesday night show at Three Links, which he’s deemed “Free Sweat.” With special guests promised, this event kind of sounds like his old annual Cake Jam bashes that he used to through around these parts. Except, y’know, those cost money to get into. So does that mean this show will be even better? Sure, far as we know!  — Pete Freedman

Elf: The Musical at Music Hall at Fair Park
Did you hear that?! — CG

Every Time I Die at Canton Hall
The New York hardcore outfit is so committed to this 20th anniversary tour that guitarist Andy Williams is pressing on in spite of recently tearing his bicep. — CG

Manchester Orchestra, The Front Bottoms at The Bomb Factory
This band caught some flack for its 2014 album Cope after fans and critics accused the group of abandoning its sound in order to appeal to a more mainstream audience. But it seems the Georgia band has returned to its authentic sound with its next album, A Black Mile To The Surface. — Obed Manuel

Lady From the Sea at Undermain Theatre
This 129-year-old Henrik Ibsen play that inspired 2014 film A Master Builder gets staged every Thursday through Sunday until December 2. — CG

A Magical Cirque Christmas at The Theatre at Grand Prairie
Live magic and feats of circus acrobatics will share the stage with live Christmas caroling at this must-see holiday spectacular. — CG

The Wood Brothers at Kessler Theater
This folk trio consists of brothers Chris and Oliver Wood and multi-instrumentalist Jano Rix. Together the three play folk blues and have released a live record, Live at the Barn in 2016. They’ll be bringing their folksy blues sound to the stage at the Granada for that soothing midweek break you’ve been waiting for. — Marlene Nunez

Scotty McCreery at House of Blues
He’s American Idol’s only country winner, per his bio, which conveniently forgets that Carrie Underwood exists. — CG

21 Savage at South Side Ballroom
Word is, the perrenial show-stealer and Metro Boomin protige is releasing his Issa Album follow-up in the next couple weeks. — CG

Dee Snider at Lava Cantina
Noise complaints from the ill-planned venue’s pissed off neighbors? This guy’s not gonna take it anymore. — CG

The Buttertones at Dada
The Calif rock outfit updated its past-leaning sound for its latest record, from Cramps-like garage rock to darker, Bauhaus-like ’80s goodness. It’s been called both “rougher” and “tougher” than what you’re used to from the outfit. — CG

Wagyu & Brew at The Meat Shop
The Euro-style butcher and eatery is hosting a Wagyu beef beer dinner with brews from Manhattan Project Beer Co. It will sell out, so nab tickets in advance. — CG

Dallas’ Free Scholarship and Student Loan Workshop at The Wild Detectives
The biggest barrier to higher education is, perhaps, outrageous tuition costs. This workshop looks to even the playing field, so to speak, with free advice on securing college funding. — CG

Cat Power at Granada Theater
The moody late ’90s singer is not only celebrating the 20th anniversary of Moon Pix this year, she released a new album on a new label this year, too. She allegedly parted ways with Matador to do so, because they wanted her to be Adele and put out albums with big pop hits. — CG

Cupcakes and Community Beer at Community Beer Company
It’s a flight pairing four artisanal cupcakes from Kitty Bunny Bakery with four beers brewed right there on site. Tickets are limited, and will likely sell out. — CG

Elf: The Musical at Music Hall at Fair Park
The best way to spread Christmas cheer is singing loud for all to hear. — CG

Bruce Robison & Kelly Willis Holiday Shindig at McDavid Studio
Charlie Robison gets New Year’s Day, but his brother and sister-in-law have ownership of Christmas with this annual concert. — CG

Saint Jhn at Trees
The Jidenna/Hoodie Allen/Usher/Kiesza ghostwriter is now taking credit and performing his material his own damn self. — CG