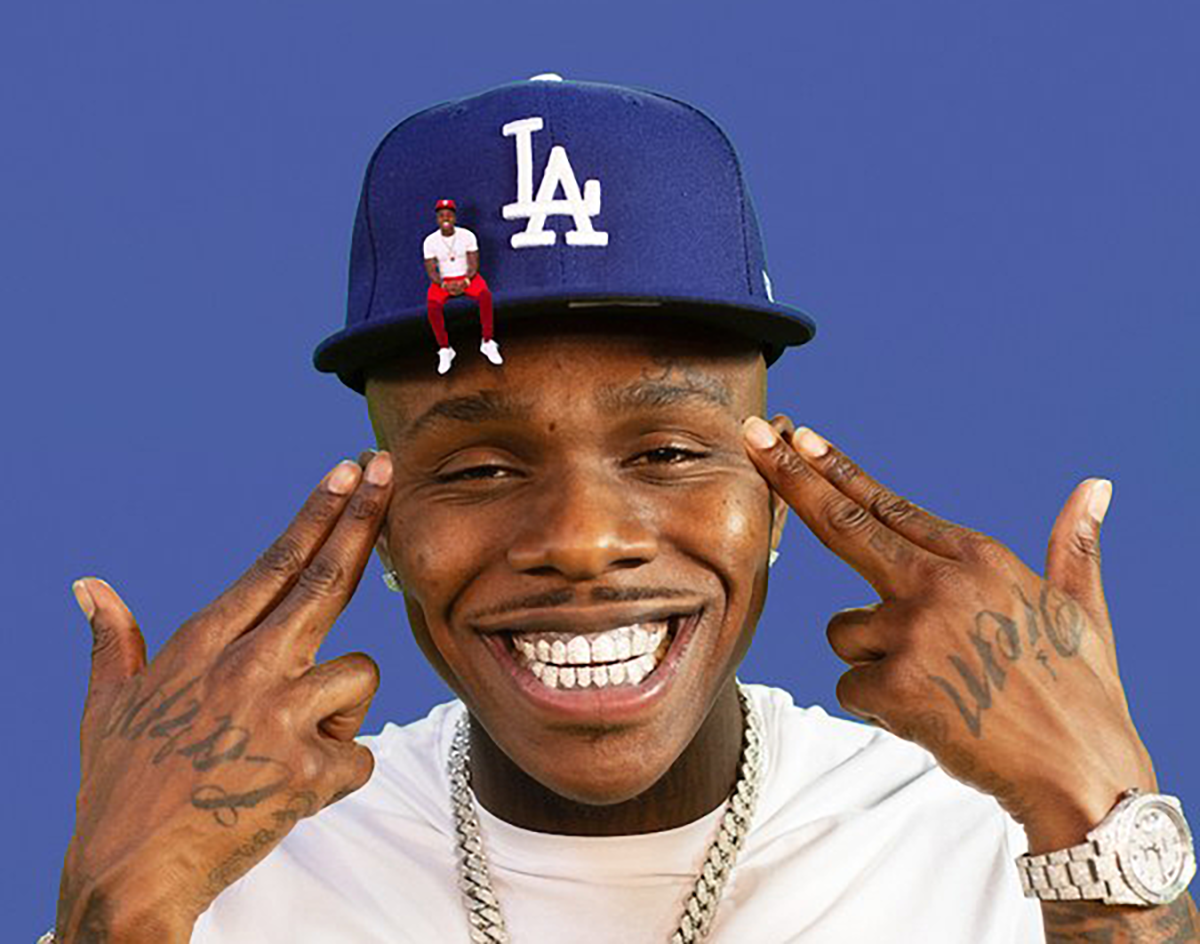 Be Baby For DaBaby, Let Sarah Jaffe Play You One Hit And One Wonder For Two Nights In A Row And Have A Drag Queen Christmas. Plus More!

You’re likely already exhausted from hearing about the impeachment of President Donald Trump, and for the most part, so are we. We apparently weren’t exhausted enough to stop from curling our eyebrows at the absolute looniness from some Republican representatives in the lead up to Trump’s eventual impeachment, though.

A congressman from Pennsylvania named Mike Kelly said that like the attacks on Pearl Harbor on December 7 1941, the day the house voted to impeach Trump would also go down in American history infamy. One of his interns should tell him there are far easier ways to bestowed an “OK Boomer.”

Also joining in on the galaxy brain comparisons was Rep. Barry Loudermilk of Georgia, who, with an impressively-straight face, asserted that Trump is being afforded less rights than Jesus was before he was literally crucified.

More like someone please put him on mutemilk. Right? Right?

Fortunately, we have a list of chasers for you to choose from below to wash down the staleness of whatever that was. Ones you won’t want to mute, either. — Alec Spicer

In Flames at Gas Monkey Bar N’ Grill
In Flames is one of the most, if not the most famous and influential band in the melodic death metal genre. They are also at the center of Sweden’s vibrant death metal scene, which boasts other marquee acts such as Arch Enemy, Dark Tranquillity, Opeth and Amon Amarth. — Garrett Gravley

Straight Tequila Night at Granada Theater
Gather all your friends in low places for this Garth Brooks tribute band. — DV

Homage Nation: The Daniel Johnston Songbook at Kessler Theater
Daniel Johnston was one of the most sincere and unique voices in Texas music, and the devastation following his loss has not dissipated. The affair will be headlined by one of Johnston’s earliest and most vocal advocates, Kathy McCarty, as well as former collaborator Jad Fair of Half Japanese fame. Tim DeLaughter (Polyphonic Spree), John Dufilho (Deathray Davies), The Sutcliffes, Paul Slavens and Jacob Metcalf open. — GG

A Drag Queen Christmas at House of Blues
This festive affair will be hosted by Rupaul’s Drag Race alum Nina West and presented by Murray and Peter. — GG

Elf at Majestic Theatre
Here’s something wild to consider: the guy who brought us Baby Yoda is also the director of this Christmas classic. — DV

Sarah Jaffe at Dan’s Silverleaf
It’s no secret we’re fans of Sarah Jaffe’s sharp synth-pop, we even named a recent track from her SMUT EP in our Song of the Day series. She’s playing two nights at Dan’s Silverleaf with a full band setup, so you’ve got double the opportunities to become a fan yourself. — DV

Sub Zero at Rubber Gloves
If you’ve ever seen a DJ perform live and think “damn, I can do that”, put your money where your mouth is – for the first two hours of this event, they’ll provide open DJ decks along with CDJs for those who need them. Sets after 10:00 p.m. will be curated booming bass from DJs like Iron Lion and Zelous. — DV

LSDREAM at Stereo Live
As you might expect from his name, LSDREAM’s glossy electronica is pretty psychedelic. The audio equivalent of Mario Kart’s Rainbow Road, if you will. — DV

Jonathan Tyler and the Northern Lights at Whiskey Ranch
Jonathan Tyler’s blues-rock probably pairs well with whiskey, so it makes sense that this is all going down at a Fort Worth distillery. — DV

Sutcliffes Annual Alcoholidays Show at AllGood Cafe
No false advertising here: the Dallas pop/rock staple the Sutcliffes will have plenty of booze as well as tunes in store for this year’s Alcoholidays. — DV

Audien at The Bomb Factory
Audien has been releasing technicolor electro-house tracks for a decade now, but he finally released his debut album last month. (Better late than never!) In honor of this occasion, he’s playing tracks from that record and more at The Bomb Factory. – DV

DaBaby at South Side Ballroom
North Carolina’s DaBaby is also a 2019 XXL Freshman, and a prolific one at that. Dude released six mixtapes in 2017, and this year alone, he dropped two critically and commercially successful albums: Baby on Baby and Kirk. You may have heard his song “Suge,” or his verse on Lil Nas X’s “Panini” remi — he’s taking over. — GG

Waterparks at House of Blues
Mikey Way from My Chemical Romance occasionally plays bass with this Houston pop-punk group. He probably won’t be at this show, but it’s a nice gesture from one generation of angst-pop to another. — DV

Northern National at Granada Theater
Our local equivalent to the soaring choruses and ultra-sincere pop-rock of Imagine Dragons and X Ambassadors. — DV

Mark Farina at Trees
Farina made his name in the storied house music scenes of Chicago and San Francisco, but these days he calls Dallas home. Good choice! Chuck Love and JT Donaldson open. — DV

Shane Smith & The Saints at Gas Monkey Live!
This Austin country-rock group is presenting this show as an Ugly Christmas Sweater Party. Honestly, there’s way too many of those this week, but we might make an exception for this. — DV

Sarah Jaffe at Dan’s Silverleaf (Night Two)
It’s no secret we’re fans of Sarah Jaffe’s sharp synth-pop, we even named a recent track from her SMUT EP in our Song of the Day series. She’s playing two nights at Dan’s Silverleaf with a full band setup, so you’ve got double the opportunities to become a fan yourself. — DV

Krampusfest at Rubber Gloves
How does one pay tribute to Krampus, the fabled European demon who punishes naughty children on Christmas, you might ask? Have a bunch of local bands like Big Hand/Big Knife perform, of course. That’s Denton Music Guild’s strategy, anyway. — DV

The Last Baile at Three Links
Not the last dance ever (hopefully), but your last opportunity to see acts like the Latinx ska band Los Skarnales and Selena tribute band Bidi Bidi Banda in 2019. — DV

The Holiday Party at Deep Ellum Art Co.
For the fifth year in a row, Do214 and Prekindle are presenting a free holiday bash to support the North Texas Food Bank. The night’s musical entertainment will consist of tribute acts to Depeche Mode, The Strokes, and ZZ Top. — DV

Flatland Cavalry at House of Blues
These guys are incredibly tight with Josh Abbott, so do with that what you will. — GG

The Wrecks at Granada Theater
The Wrecks’ brand of caffeinated pop-rock is decent, but most interesting is its local support act: the Dallas pop-punk trio Not Ur Girlfrenz, who we named the “Best High School And Under Act” at last year’s Central Track Music Honors. — DV

Stylz 4 Mylz Rockabilly Christmas at Gas Monkey Bar N’ Grill
Trade out Santa’s sleigh for some tricked-out low-riders and vintage cars. This party and car show is dedicated to the concept of mid-century cool that rockabilly culture treasures. — DV

Pentatonix at The Theatre at Grand Prairie
Arlington’s a cappella stars have apparently recorded so many Christmas songs that they just dropped a Best-Of compilation made up of only their Christmas tracks. One of those is a cover of “Coldest Winter” by Kanye, so at least they have good taste in Yeezy deep cuts. — DV

It’s A Wonderful Life at Majestic Theatre
Sappy? Oh, absolutely. But compared to the Christmas movies Lifetime and Hallmark crank out every year, this film’s heart-string tugging feels earned. — DV

Hillbilly Orchestra at Gas Monkey Bar N’ Grill
This redneck-metal band is perhaps the complete opposite of the Trans-Siberian Orchestra, but both are holding Christmas shows this weekend. Flip a coin. — DV

Rosegarden Funeral Party at Three Links
These Dallas rock goths are here to make your Sunday full of sorrow in all the right ways. The band also needs your help in getting a new tour van after an accident earlier this month, and is not too far off from its goal. — DV