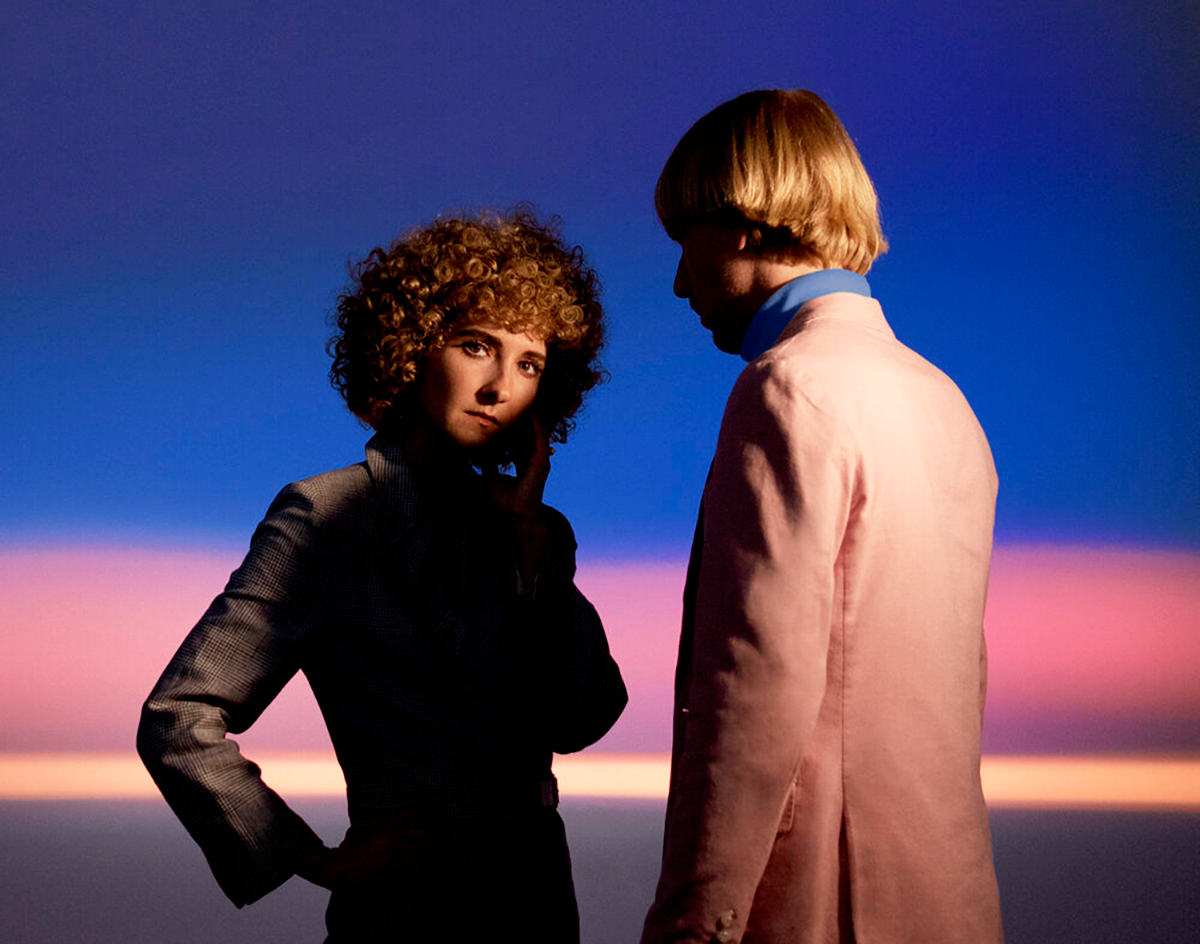 Learn How To Forgive With Tennis, Let Metronomy Make Everything Go Your Way And Help Support Clifffs Through A Panic Attack. Plus More!

This year’s fashion trend: the French Revolution, but make it fashion.

Before presenting his designs, Scott spoke on the parallels between modern-day political turbulence and that of the French Revolution, saying “on the geopolitical spectrum, the turmoil is very similar.”

Scott’s designs were intended as both commentary and couture — according to the notes for the show, “the confectionery cocktail dresses stand as a sly comment on the denseness of certain people in power.”

That would probably be quite an insightful observation if the irony of Scott selling those same dresses to other people in power at a fancy fashion show in Italy was lost on us. Talk about having your cake and eating it too.

so jeremy scott brings back the pannier, an unexpected trend that came about in ss20 (seen at loewe, thom browne, rick owens) in the style of marie antionette. now to have a luxury label like moschino play on the most infamous story of elitism is quite ironic – pic.twitter.com/aFuPBy0FZu

That said, the outfits on display were genuinely inventive, combining modern miniskirts and hoodies with 18th century corsets and jewelry for a time-traveling take on high fashion.

One model was described as “Manga Marie Antoinette,” the starry-eyed faces of anime girls adorning her decadent top. If Hot Topic existed in the 1780s, it might have sold outfits like hers.

Other dresses envisioned Marie Antoinette reincarnated as a leather-clad biker or dressed as the cake she infamously suggested her impoverished subjects eat.
Supermodel Bella Hadid strutted down the catwalk with a beehive wig that resembled The B-52’s more than any French royalty.

The fashion show was memorable overall, but if Moschino wants to go all-in on the historical theme next time around, it should invest in a photo booth with bedazzled guillotines — just our suggestion!

Fashion requires its followers to go to ridiculous lengths to stay on trend, but there are much more convenient (and cheaper) methods to stay on top of current trends.
One example: our list of cool events happening around DFW this week. — Daniel Valdez

Audrey Mika at Club Dada
Audrey Mika is one of those artists that developed a dedicated following by uploading cover songs to YouTube. To date, she has 1.3 million subscribers. — Garrett Gravley

Black Jacket Symphony at House of Blues
No classic rock band is safe from being covered by this band. The tribute act has recreated over 35 classic rock albums spanning anywhere from the ’70s to the ’90s. During this tour, the band is covering Pink Floyd’s “The Dark Side of the Moon.” — Mason Geear

Obituary at Ridglea Theater
These Floridian death metal legends were added to a relatively last-minute and intimate show at Fort Worth’s Ridglea Room, but the band still has 60 percent of its original lineup after over 35 years, so yeah, that’s a big deal. — GG

Cult of Luna at Trees
There’s a genre of metal called “post-metal” that infuses elements of doom metal with those of chamber rock and post-rock. Sweden’s Cult of Luna is one of post-metal’s most successful and notorious bands, joining the ranks of other contemporaries such as Pelican and Isis (a band that formed in 1997 before that name meant something entirely different). Emma Ruth Rundle (of Red Sparowes, Marriages) and Intronaut open. — GG

Metronomy at Canton Hall
Last year, Metronomy released its sixth studio album, Metronomy Forever. This will be the “indietronica” band’s first Dallas show since 2014, when they played Trees with Dawn Golden. — GG

Transviolet at Club Dada
This alt-pop San Diego band boasts a stamp of approval from none other than current reigning pop darling Harry Styles. — NJB

Ile at House of Blues
Grammy award-winning Puerto Rican singer Ileana “iLe” Joglar is back on tour to support her sophomore solo album after a some time away for a hiatus. — NJB

yMusic at UNT
This collective of six classical musicians performs tunes by the usual long-dead classical artist as well as contemporary hits. — NJB

Pepper at Deep Ellum Art Co.
This Hawaii-gone-San Diego rock band has had its music in plenty of different forms of media including movies, television, and video game soundtracks. The trio have also worked with members of 311, No Doubt and Butthole Surfers over their 20-plus years in the industry. Now, the band is on tour with its latest release, Local Motion. — MG

Illiterate Light at Three Links
This duo from Virginia used to tour on their bikes in the summertime. Now, they’ve moved up to a bus and are touring their debut album across the country. — NJB

Little People at Ruins
This electronic hip-hop artist learned everything he knows about being a DJ in his birthplace of Sweden. When he brings his “beats, bleeps and snippets” to Dallas he is likely to attract fans of his underground style as well as the occasional misguided fan of Little Women. — NJB

PSA. Presents: Portrait of Jason at Texas Theatre
PSA (Pleasure Style Attitude) is a new pay-what-you-want film series that showcases the underrated cult classics of queer cinema. For the series’ inaugural screening, the Texas Theatre will be presenting Portrait of Jason, an intimate documentary about the gay black hustler and cabaret performer Jason Holliday. — DV

Howard Jones at Gas Monkey Live!
This English pop singer, who saw most of his success in the ’80s, is playing stripped down versions of his songs on acoustic guitar and the electric piano. —NJB

Y0 Idea Festival at Rubber Gloves
If you missed the improvisational music festival No Idea Festival in Austin, this off-shoot gig will provide even more spontaneous soundscapes. Among the night’s performers is Garrett Wingfield, whose fiery sax skills can be heard throughout Wild West Combat by Starfruit. — DV

Barf Wave Plays The Hits at The Nines
We nominated this monthly DJ night as one of our favorite recurring parties in town at this year’s Central Track Music Honors, so if you haven’t experienced it for yourself, now’s your chance. — DV

Tennis at Granada Theater
Denver indie-pop, husband-and-wife duo Tennis will be celebrating its decade anniversary as a band this year. The band has remained an indie darling since its beginnings, and just dropped a new album titled Swimmer. — GG

Destroyer at Club Dada
For two decades now, Dan Bejar has played the role of the louche lothario who waxes poetic as Rome burns. His new synth-pop album under the Destroyer moniker, Haven’t We Met, continues in this wry vein. — DV

Dweezil Zappa at House of Blues
Dweezil isn’t this singer-songwriter’s real name, but he is the son of the legendary Frank Zappa. Another fun fact: At one point in time he had a cooking show on Food Network. — NJB

COASTCITY at Ruins
A powerhouse producer and a prolific songwriter joined forces to create Latin-pop magic that is COASTCITY. — NJB

Tyler Farr at Lava Cantina
BNA records released two of Farr’s singles during his time there and then they completely closed. Luckily, he went on to a new record label and released a song called “Redneck Crazy.” The song was clearly a hit, it got the stamp of RIAA Platinum certification. — Natalie Bermudez

Clifffs at Three Links
Clifffs will be celebrating the release of their banger of a new album titled Panic Attack. Joining the band to celebrate are Sub-Sahara, Ottoman Turks and All Clean. This is one you don’t want to miss. — NB

Mike Pinto at Gas Monkey Bar N’ Grill
Mike Pinto’s mix of reggae, surf rock and ska produces the kind of music that makes you wish you were on vacation. — NJB

Texas Furry Fiesta at Hyatt Regency Dallas
Say what you will about the furry community (plenty of people certainly have), but it has proven to be a thriving, artistic DIY community with a prominent queer presence. No, seriously! — DV

Twiddle at Deep Ellum Art Co.
The ideal way to listen to a jam band like this is during a spirited game of hacky sack on the campus quad, but seeing it perform live is probably the next best thing. — DV