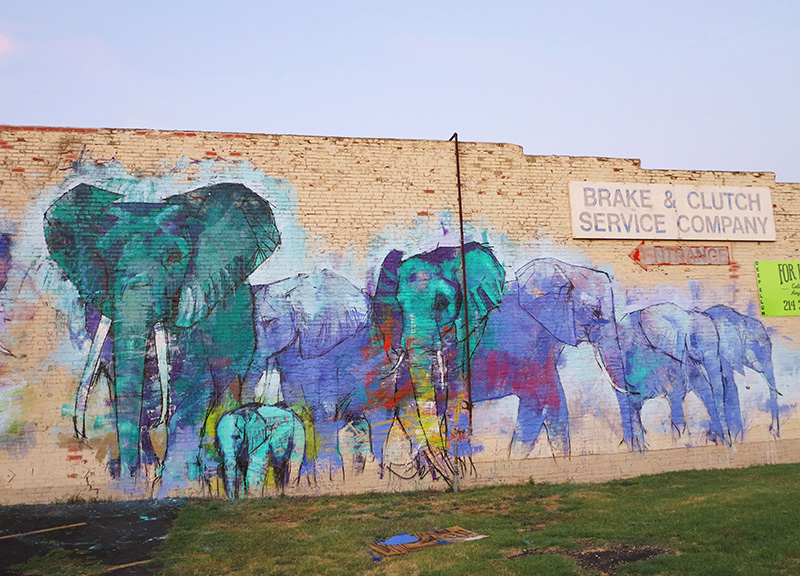 A New Elephant Mural Is Just The First Of Many New Art Projects Coming To Deep Ellum’s Walls.

The sun high above him — and only getting higher as noon approaches quickly — Adrian Torres wipes some sweat from his brow and points along the ground toward the increasingly smaller sliver of shade that this wall on the easternmost edge of Deep Ellum affords him.

“The later it gets,” he says through a smile, but a little frustrated just the same, “the less shade I have.”

It’s an offhand observation, but a telling one: Torres has become intimately familiar of late with the grounds of the vacant Brake & Clutch Service building at the intersection of Main Street and Exposition Avenue; for more than a week, and right up until this past Sunday when his time there came to an end, that building’s westernmost wall served as his 6:30 a.m. to noon home base every day. The shadow is this Spanish painter’s only respite from Texas’ July heat as well as the time-keeper for his attack upon the wall providing it.

His is a benevolent maneuver, but a hurdle just the same: “I’m a painter,” Torres explains. “I do fine art. I don’t really do graffiti, and this is the biggest-sized canvas I’ve ever done.”

The size is what dictated his efforts here. Stretching across Torres’ wall is a stunning parade of 12 elephants — a total he has to count to confirm — that would look more at home on as part of water-colored canvas than on a Deep Ellum wall. And yet it’s that exact dichotomy that makes this presentation so visually striking.

Torres came to this wall and project after already being scheduled to be in Dallas this month for other work opportunities (he also operates a non-profit called Riding Colors that aims to help the needy across the globe through artistic endeavors). Upon hearing this news, a local artist with whom Torres had previously collaborated in the Philippines — Lesli Marshall, also a painter — suggested he tackle this blank wall while in town, too.

Marshall, who also operates her own Articulation Art visual consultation firm, actually does have that awesome power: These days, she’s working alongside Scott Rohrman, founder and owner of real estate development firm 42 Real Estate, on a new project called 42 Murals. The project aims to place, as it name implies, an eventual total of 42 murals across a selection of 53 bare exterior walls that surround 39 properties within 42 Real Estate’s Deep Ellum domain. (Deep breath.)

The motivation behind the project, an extension in some regards of 42’s acclaimed earlier Deep Ellum Windows efforts, is obvious: The company hopes to better draw attention to its properties’ natural assets, all the while winning some neighborhood beautification points and, y’know, maybe attracting some new tenants along the way. If Torres’ pleasing direction — which stands in stark contrast to some of Deep Ellum’s rougher (in spirit and design) wall pieces — is any indication, the project could contribute to the continued softening of this neighborhood’s evolving image.

Rohrman anticipates designs of all kinds adoring these walls — everything, he says, “from perspective to portraiture.”

“There’s going to be variety,” adds Marshall, who’s helping helm the vetting process for artist applications for the project’s many available walls. The project’s 42 approved artists will each receive a flat stipend to cover their efforts and expenses. 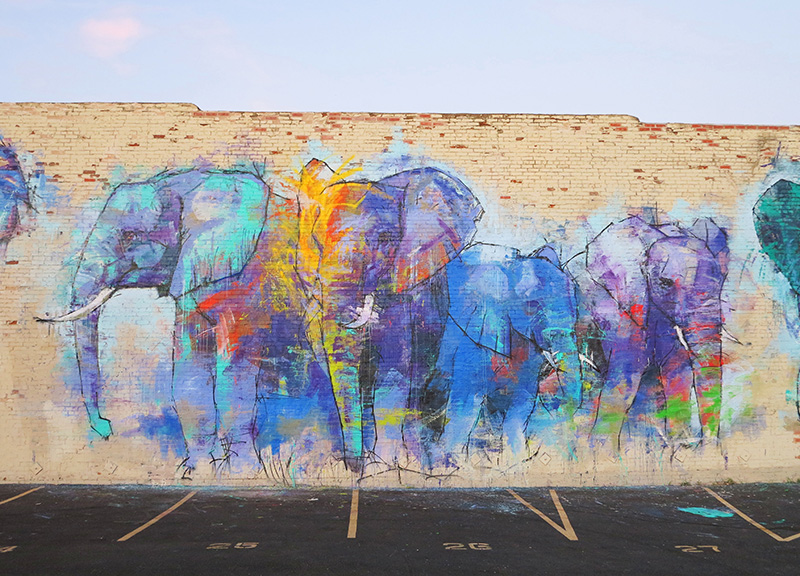 The goal, Rohrman and Marshall agree, is to enhance the neighborhood’s visual presentation without alienating it. Look around Deep Ellum and you’ll see murals at most every turn; the neighborhood is already known as a Dallas mural hub. Still, adding 42 new designs to the mix is a substantial increase.

‘We’re trying to listen to the community,” Rohrman says.

No doubt, if Deep Ellum as a neighborhood has made anything clear over the years, it’s that it approves well of colorful wall art. 42 Murals, it seems, is intent on take that pushing that vibrant narrative forward.

Torres’ scene — it’s unnamed, may we propose “Ellumphants” as a possibility? — may have quietly arrived on the scene. But, representing twelve elephants’ worth of steps in that new direction, it would seem the piece also signals an impending art stampede. 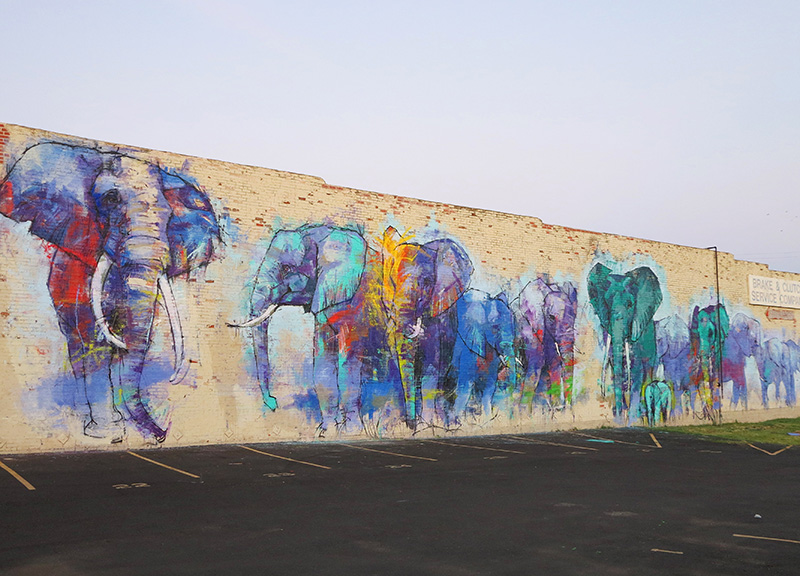