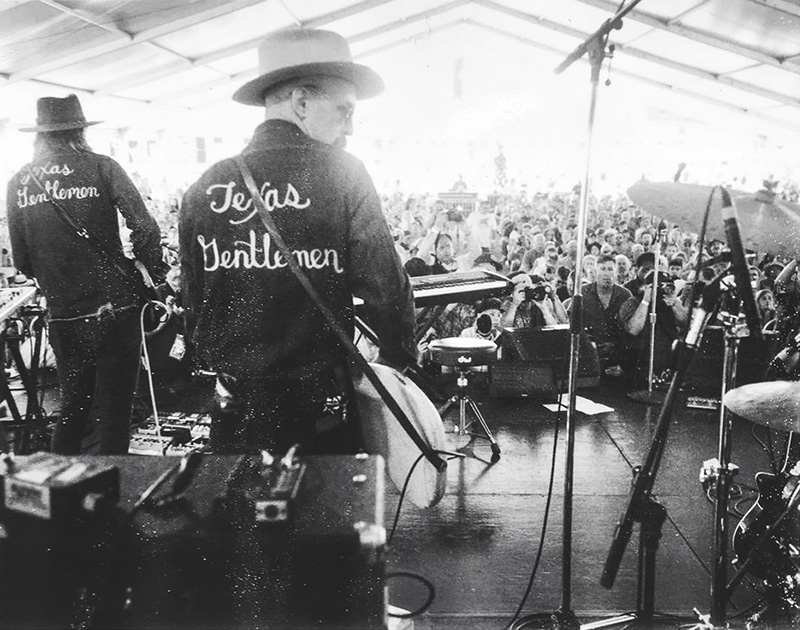 The Texas Gentlemen’s Legend Grows, Dallas Gets Its First Psych Fest, -topic Temporarily Peaces Out, Pueblo Releases Its First Video and The Old 97’s’ Drummer Is Laid Up.

The legend of the Texas Gentlemen has long spread past the confines of North Texas.

Sure, with their backing of Kris Kristofferson, Joe Ely and Terry Allen at last summer’s Newport Folk Festival, it’s been increasingly common to find them sharing stages with the likes of Alejandro Escovedo, Jack Ingram, Paul Cauthen or Jonathan Tyler. But, over the weekend, Texas’ modern-day version of The Wrecking Crew added a few more notches to their belts, backing both Ray Benson and Ray Wylie Hubbard at Willie Nelson’s annual Luck Reunion. The boys then capped off their SXSW weekend in Austin by holding court at the famed Arlyn Studios, playing live sets with half-a-dozen other singers whose projects they’ve worked on over the years, and stunning the room with cuts from their upcoming debut album, which is tentatively due out later this year. You’ll likely hear a handful of those dazzling originals when the band plays live at the second annual Old 97’s County Fair at Main Street Garden Park on April 8.

Speaking of Austin festivals: Unlike South By, one of Austin’s other long-running fests, the psych-oriented Levitation won’t be returning. Ever at the ready to take up some of the slack, Dallas psych band Monoculture will throw what it’s calling “DFW’s first-ever psychedelic music festival.” Dubbed Paisley Maze, the June 3 fest will find other members of the burgeoning local psych scene — Acid Carousel, Native Fox, Natural Anthem and Sunbuzzed — performing at Dada as well. Additionally, several visual artists will display their works in a gallery format. Tickets are currently available here for $10.

Sticking on the event tip, the Dallas Art Fair has decided to add music programming for the first time ever, calling it The Dallas Music Experience. We’ve been told that, no, that’s not just a name that they’re work-shopping. Programmed by Lee Escobedo, five acts will perform at Fashion Industry Gallery on April 7.

By then, of course, Dallas rapper -topic will be long gone. He is peace-ing out, and moving to Los Angeles by April 1. Before that, he’s throwing one last party at Trees this Thursday. Oh, but then he’ll be right back, performing at Fortress Festival on April 30.

Another NTX musician that once famously left town for California only to eventually wind up right back here is Don Henley. He recently announced that he’ll be celebrating his 70th birthday with a big concert in his hometown. On July 22, he and several “special guests” will perform a birthday concert at American Airlines Center.

Meanwhile, Independent Bar & Kitchen is getting into the DJ game. Starting On March 31 and April 1, the Deep Ellum restaurant will be kicking off new Friday and Saturday night weeklies, from DJs JT Donaldson and Christy Ray, respectively.

Moving on, Pueblo debuted another song from its upcoming debut EP, Boring the Camera, via a new very Dallas-inspired music video.

Medicine Man Revival did something similar, debuting a new song via a video of its own. It’s also Dallas-inspired, in that it was filmed live at GoldRush Café.

Our last video of the week, on the other hand, finds the now-Nashville-based project The Whistle and The Bells releasing a quirky new clip for its “Good Drugs” single. The song comes from the band’s record coming out via New West on April 28.

Finally, this week, we close with a bit of news from a former New West act.

You may have noticed that when Old 97’s and special guest Caitlin Rose performed “Good With God” on Conan last week, drummer Philip Peeples was conspicuously absent. While preparing for the show in Los Angeles, Peeples endured something of a freak accident, hitting his head in a parking lot and suffering “multiple skull fractures, a concussion and a brain hemorrhage,” thus causing him to miss that show and a week or so of performances on the band’s tour. In the meantime, the band’s longtime tech and Polyphonic Spree drummer Jason Garner has been filling in.

The rest of us wish Phil a speedy recovery.

Cover photo via The Texas Gentlemen’s Facebook. Got a tip for White Noise? Email us!