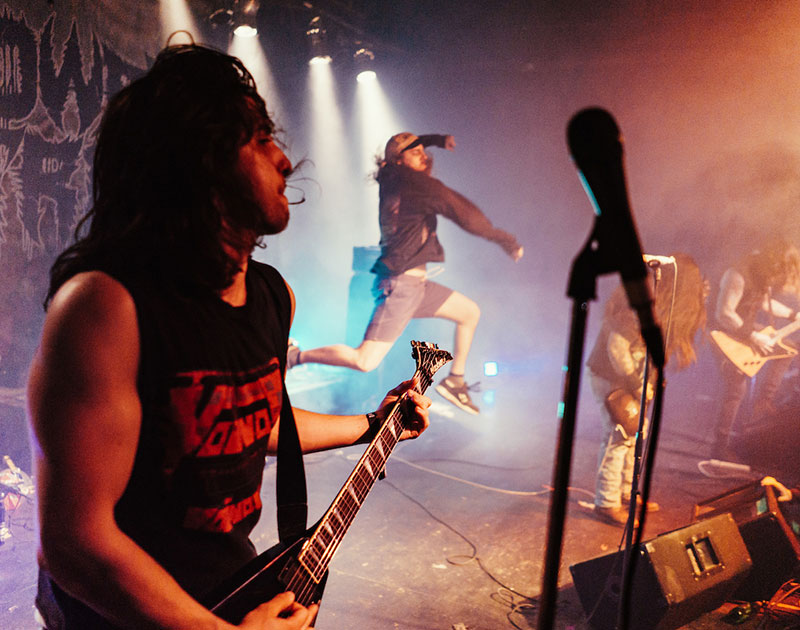 Selena Gomez Speaks Out About A Recent Health Scare, Canton Hall’s Opening Gets Postponed And Power Trip Officially Has The Top Metal Song Of The Year.

This week, Selena Gomez went public with the details surrounding her hush-hush emergency kidney surgery that she underwent over the summer.

In an interview with The Today Show, the Grand Prairie native was joined by her best friend Francia Raisa, who donated her kidney to Gomez and helped the “Hands To Myself” singer overcome the most recent battle in her ongoing fight against her lupus diagnosis.

But, now on the other side of that dire situation, things appear to be on the up-and-up for Gomez. Last week, she released a new collaboration with EDM star — and Lights All Night ’17 headliner —Marshmello called “Wolves,” which you can check out below.

And, just today, she received some more cool news, as Billboard named Gomez its pick for 2017 Woman of the Year.

Of course, North Texas has produced a ton of badass women pop stars like Gomez over the years, including Burleson-raised vocal powerhouse Kelly Clarkson. In anticipation of the release for her eighth studio album, Meaning of Life, Clarkson spoke to Rolling Stone this week about the recording of the new album with her new record label, Atlantic Records, and how it will be reflective of her big, flashy concerts.

And, not to be outdone her fellow North Texas-born pop superstar peers, Colleyville’s Demi Lovato this week announced a run of big flashy concerts of her own in the form of a 20-date tour with DJ Khaled for 2018 in support of her latest album, Tell Me You Love Me. That tour will hit Dallas on March 7 at the American Airlines Center, with tickets going on sale this Friday at 11 a.m. right here.

Norah Jones, meanwhile, is the feature performer on the latest episode of ACL Live that aired this week. During the crooning, delicate performance, Jones performed singles from her latest album, including “Sleeping Wild.” The release date of the episode coincides with the brand-new deluxe edition of her album, Day Breaks. The full performance can be seen below, and also features Angel Olsen.

A couple weeks ago the rap world was shaken when video surfaced of rapper Lil B being attacked by a group of people allegedly associated with A Boogie Wit Da Hoodie at the Rolling Loud Festival in the Basedgod’s backyard in the Bay Area. After the incident, support rained down for the rapper from the likes of Drake, Travis Scott and more –but Fort Worth rappers Go Yayo and the attention-loving Boogotti Kasino got a special shout out from Lil B after Kasino stated in an interview that he would slap A Boogie if he ever saw him for what he did at the festival.

This wasn’t the first time Lil B has shouted out Kasino and Yayo. Last month, the Bay Area rapper randomly exclaimed how much he liked listening to Kasino and Go Yayo’s music.

Coincidentally, A Boogie Wit Da Hoodie has a show in North Texas tonight at South Side Music Hall. If he needs to get a flight out of town quick, he might wanna look to the Dallas-based Southwest Airlines for a ticket out of Dodge. Unfortunately, he might have to put up with a random in-flight concert from someone on the Warner Music Nashville roster while in the air, as the two entities recently announced an expansion of their horrifying partnership.

Speaking of horrifying things: Former Dallas radio DJ Kitti Jones spoke to Rolling Stone this week about a tumultuous and abusive relationship she had with R&B star R. Kelly. The feature follows the recent spate of allegations against R. Kelly in which he is accused of holding women against their will in an apartment he owned.

In far more exciting news, Power Trip took home a hell of an award last week. The Dallas thrash band won the “Metal Song of the Year” award for its song “Executioner’s Tax (Swing of the Axe)” at the 2017 Loudwire Music Awards, beating out some tough competition for the honors, including Pallbearer, Body Count, Obituary, DragonForce and Municipal Waste. In accepting the award, frontman Riley Gale made quite a statement to metal gatekeepers around the world, too: “Watch out old timers, we’re here.”

A couple of Fort Worth venues, on the other hand, are about to be old news. The Fort Worth Star-Telegram reports that West 7th area pioneer Capital Bar is closing and will host a last hurrah starting on November 3. Meanwhile, The Grotto is facing the same fate and will be throwing a string of farewell shows throughout November, including a Luke Wade-headlined bash on Saturday, November 4.

Dallas, meanwhile, is still breaking in some of its new Deep Ellum venues. New Commerce Street spot Deep Ellum Art Co. is hoping a new weekly event called “Musician Swap Meet” will draw in the crowds. As the venue describes the recurring event from 8 p.m. to 11 p.m. on Mondays, musicians can come in and meet other musicians, try out new members for a band or just jam.

New spot Canton Hall, on the other hand, has pushed back its opening, which was originally slated to take place tonight with a show from Theory of a Deadman. The venue blames “unforeseen construction delays” for postponing that show to a TBD later date, meaning it will be at least a few more days before the concert-going public gets the chance to take a look inside the old Deep Ellum Live space. No exact word on when that might be, though.

Oil Boom released its new Terribility album last week, and celebrated that release this week with an Impose Magazine-premiered video for its song “Earful,” which features a starring turn from Son of Stan‘s Jordan Richardson.

Then there’s Sudie, who herself released an EP last week titled Sudie at Elmwood, and followed things up this week with a new video, “Spill II”

Then there’s Denton’s Thin Skin, which this week enlisted the blog For The Rabbits to premiere its visuals for its “My Song Ate” and “Tits” tracks.

And, lastly, electro-pop husband-and-wide duo French 75 released a video for their song “Your Love,” which is the first single off an upcoming album set to drop later this year that was produced in full by Dallas producer Left/Right.

Power Trip cover photo by Karlo X. Ramos. Got a tip for White Noise? Email us!