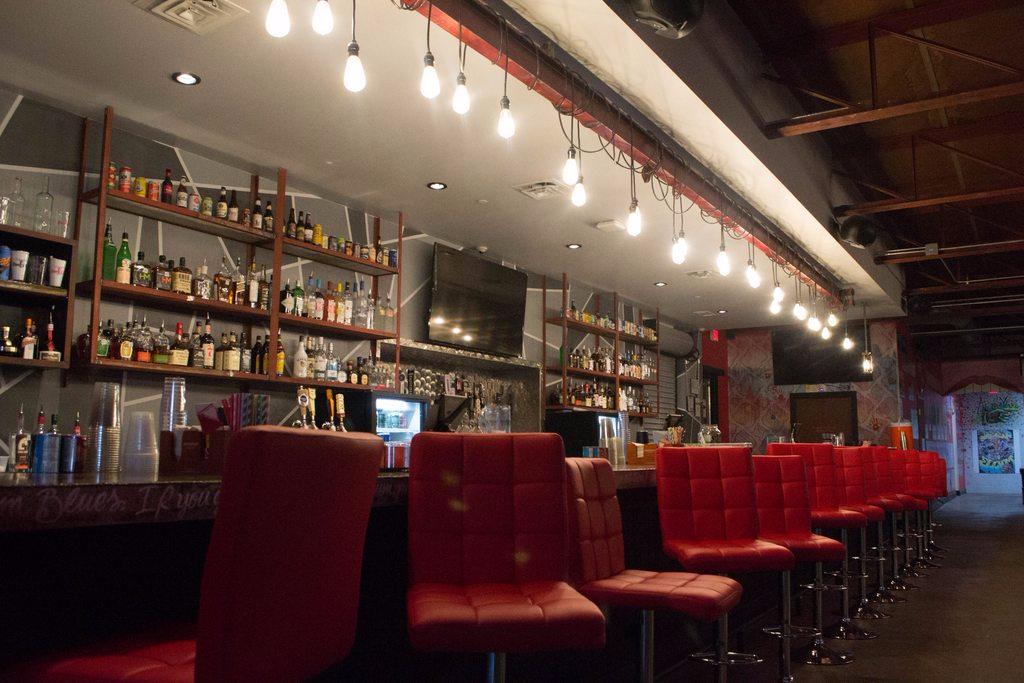 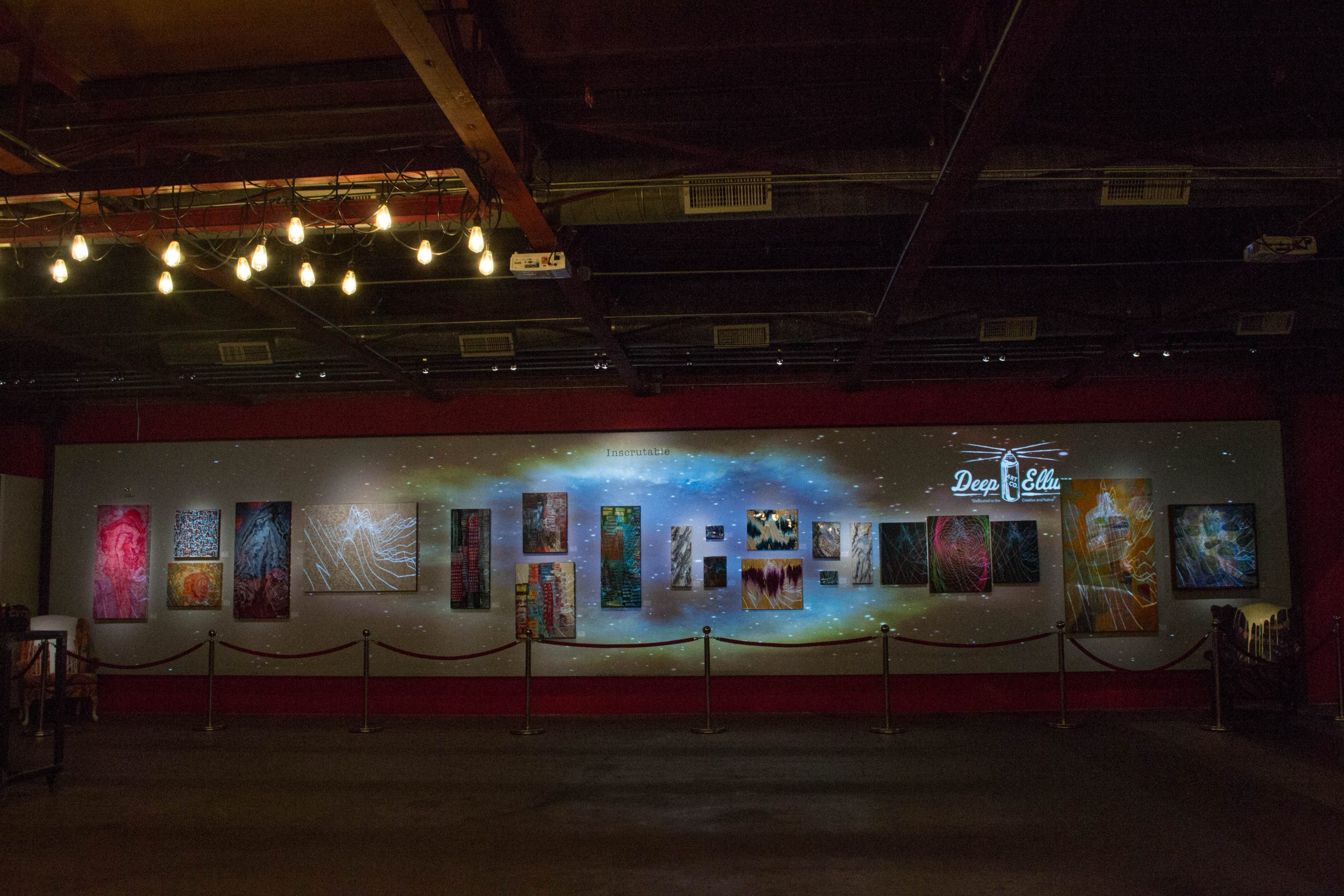 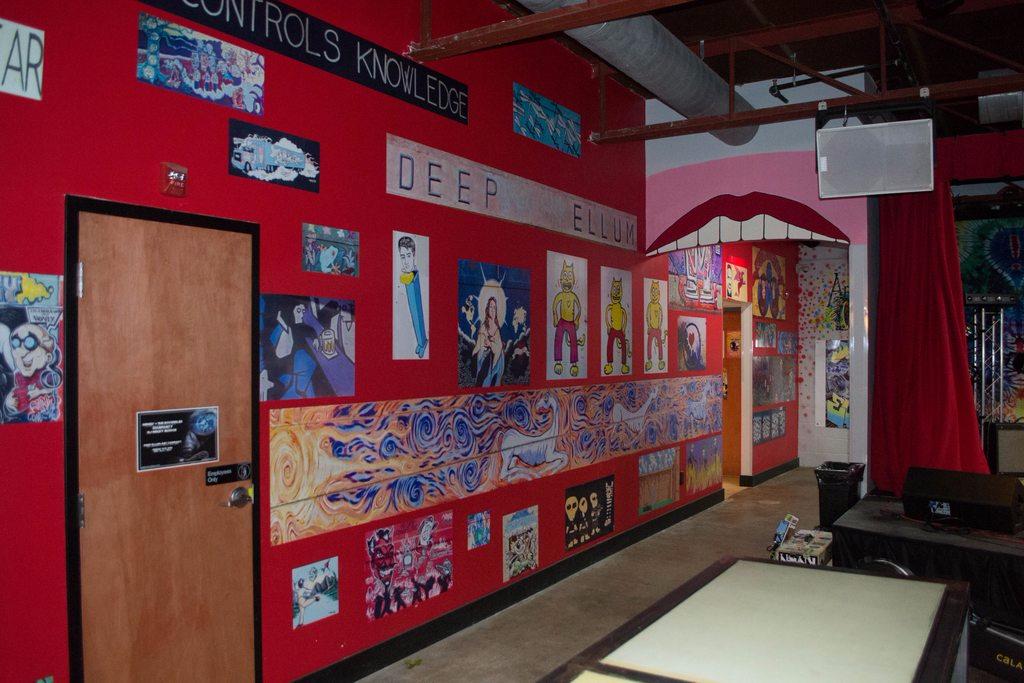 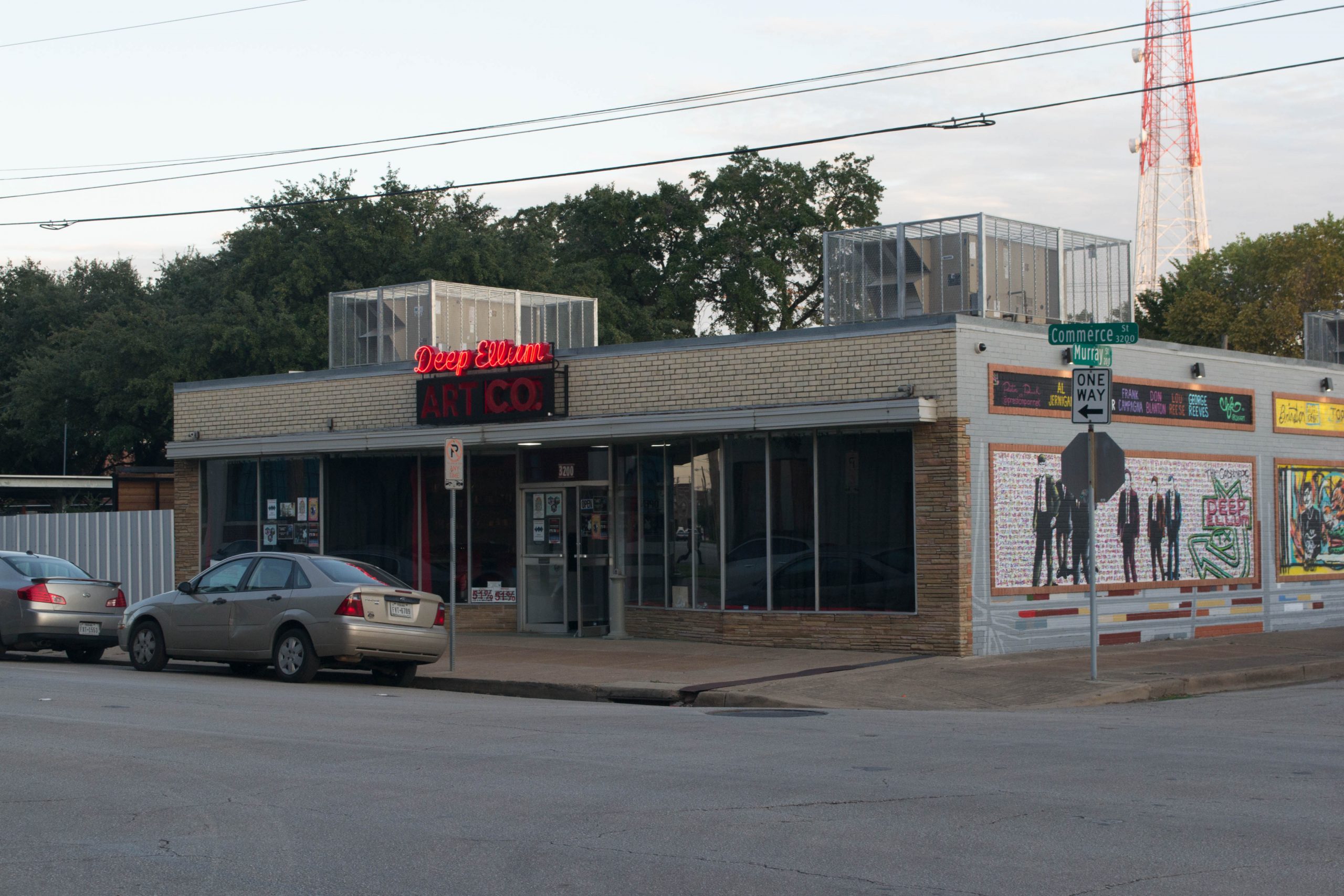 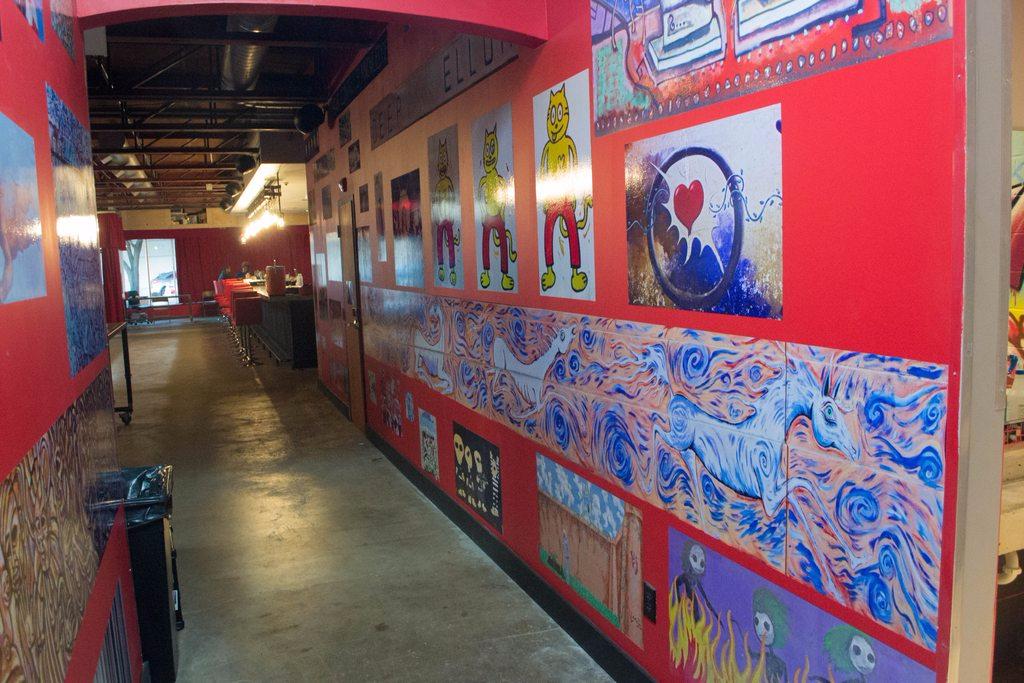 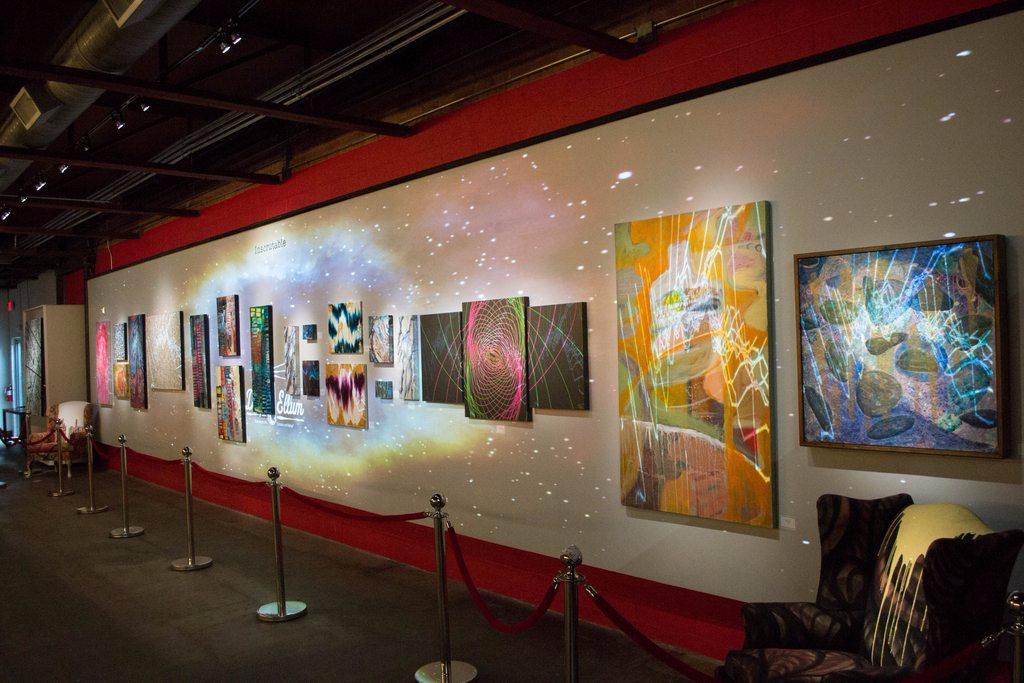 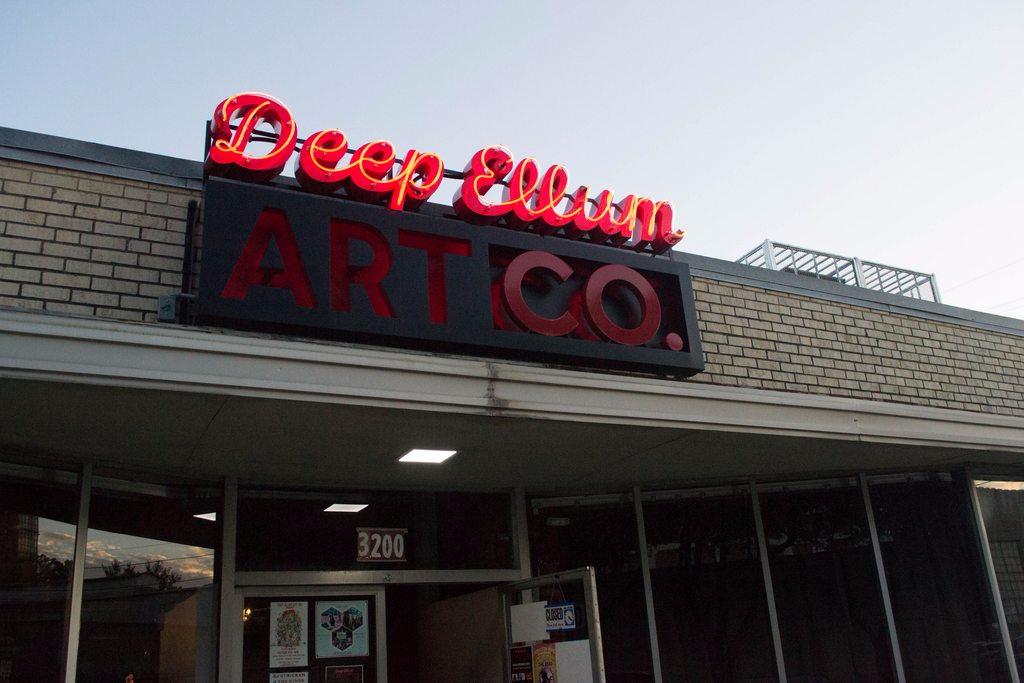 After a month of quietly hosting performances from the Dolfin Records set and establishing itself as a go-to spot for hanging out and checking out music on the eastern edge of Deep Ellum, the new Commerce Street venue Deep Ellum Art Company took its formal bow on Friday, October 20, hosting a grand opening concert featuring sets from Larry g(EE), Sam Lao and LEV.

Now, with a calendar bolstered by Margin Walker-presented concerts and local performances of all sorts, the space is ready to take the next step. And it certainly looks capable of doing that: Bigger on the inside than it appears from the outside, and with a surprisingly large patio space out back, the new spot, which takes its name from the defunct art store sign that hung for years above this vacant building, aims to set itself apart from the crowded Deep Ellum venue market by opening its doors to all comers — so long as those comers embrace a creative spirit.

To learn a little bit more about this new player on the scene, we recently caught up with owner John LaRue discuss how this space come to be and how he envisions it developing an identity all its own in a quickly changing Deep Ellum landscape.

Before opening Deep Ellum Art Company, I understand you worked as a teacher.
Yeah, I was in the classroom, teaching for 10 years.

What made you want to shift from that to opening up a place like this?
Well, I still coach. I stopped teaching as my second son was born, so I just decided that I’d rather be at home spending time and teaching them versus teaching other peoples’ kids. And the bureaucracy behind teaching is kind of exhausting year after year. The changes that always come and stifle creativity, which is what I thrive on. It made sense to pursue other avenues that were more lucrative with a young family. You don’t make a whole lot of dough teaching, and my time in the financial world helped me out, but it doesn’t last forever.

My wife and I wanted to do a restaurant space. We went as far as to trying to bring something from California down here, and that didn’t work because of the franchise agreements. So we partnered with someone else to do a place in SoCal, and that’s kind of what got us into the bar and restaurant space there. From there, we’ve always wanted to do venue space while incorporating music in whatever restaurant or bar space we’d do. And this place was available.

What is the concept of Deep Ellum Art Company in your mind?
It’s an artist venue — and that’s, like, every art. Culinary arts, 2-D arts, 3-D arts, mixology, music, sculpture, spoken word. Anything that you can possibly wrap under this umbrella, that’s what this space is dedicated to. Our slogan is: “Dedicated to the creative and native.” I think that pretty much sums up everything we’re about. We’re a space for people to come and create in. We create our own experiences and shows, and encourage others to come in here and be inspired to create things that they’re wanting to see come to fruition.

There a huge need for it. If you look at the number of pop-up art galleries that get shut down on a regular basis because of lack of CO and what have you, obviously people are wanting a space to do those sort of things in. So it made a lot of sense to create a space for people to do just that. We have a certain individual coming on later this month that wants to make in snow in here. They asked, “Can I make it snow in here?” and I asked, “I don’t know, can you make it snow in the Art Co.? ‘Cause I’d sure love to see that!” But that’s the level of creativity that we’re trying to attract here.

That’s what brought Deep Ellum about. It became a cultural hub. Deep Ellum was one of the first places in Dallas to become desegregated by choice. That’s long before any civil rights movement in the 1960s. People came down here to hangout together because the music was here, the food was here, the dance was here. It was good times and it didn’t matter, the stupid inequalities that people assign to one another. As long as you don’t come with malice in your heart and act like an asshole, most people will come with open arms and welcome you. No one cares how many tattoos you have or what your wearing. Deep Ellum has always been about coming as you are and having a good time.

I think there’s a lot of concerns in the neighborhood of the growth of identity is being lost to some extent. I think this happens every time there is a rebirth down here. People worry about Deep Ellum losing its identity and becoming some other part of Dallas. I don’t think that’s ever really going to happen, especially when people are willing to show everyone else why Deep Ellum is cool and it is the way it is.

You probably don’t remember the Good Latimer tunnel, but it was the entrance to Deep Ellum. It was one of the coolest fucking parts about coming to Deep Ellum, going through the tunnel. In the interest of progress, they got rid of it. It was like being birthed into a totally different part of Dallas. I grew up in the bubble. My people were not there. There were maybe a dozen of us, and it was kind of lonely. The first time I found Deep Ellum, I found home.

We did our part to bring that back. I wept when that was demised. It made me very sad. When we had an opportunity to bring it back, we did it. There was no one who fought me on that whatsoever. The hardest part was figuring out, “Well how the hell are we going to make all that art happen?” Thank God for Sean Fitzgerald, who had all of those photographs saved and was willing to share them all with us. So we printed all the ones we can fit on vinyl, and it really came out nice to put on the wall. We might be missing maybe two or three pieces from what the tunnel was before it’s eventual demise. But there’s pieces up there from artists that I’ve been watching my whole life. From my childhood to my adulthood I’ve been watching the artists paint and create all over these streets, and to be able to bring some of those back was very emotional for us once we started putting the vinyl on the wall. We didn’t think something like that would be able to rock you to do the core, but it did.

There’s a bunch of people moving in, and they all need to kind of see what it is that they’re moving into. Accurate representations.

So what are your long term plans for Deep Ellum Art Company as a whole? Where can you see the premise of this creative space playing its role in Dallas?
I hope the effect that we have is a place of unity, a place of community. That’s been my goal since the first time my wife and I have talked about this. “What is this building that has ‘Art Co.’ on it? What does a business in the Art Co. look like?” We could have made a liquor store or a grocery store or whatever the hell we wanted to make here once we found the space was available and had the funds, but we wanted to honor what it said. In honoring what it said, that’s honoring the community around it. You change the ‘Art Co.’ sign and you change what the building has always been. So we wanted to go in the same direction it was already traveling. Bringing people together has always been the primary focus here. I hope that, as a result of being here, Dallas’ art is elevated in some way, shape or form. Whether that’s someone that gets another gig because they had a piece here, or they get their start here, or they sell their first piece here or their first mural — like Chase Fleischman outside — or, in Jeff Thornton’s case, they do the first mural that they’ve been able to do on their own in 20 years. Twenty years, that guy has been working in the city, and he’s been directed by different tasks that he’s been paid to do. He hasn’t had a creative freedom to be told, “Hey, go paint whatever the hell you want to paint over there.” That was huge. I want those opportunities to keep coming.

What gets you most excited about starting this company?
What gets me most excited? That I might get to do this for the next 40 years of my life. That and peoples’ reactions really. That’s the most exciting thing. Seeing people come in and watch how we’ve transformed the space from a pea green rectangle of a building to something that I think is quite beautiful. And all the amazing people that have come together to make that happen. I can dream all the dreams I want to, but without that interaction, it doesn’t happen. It’s pretty cool to get to know so many amazingly talented people and let them have a hand in this. That’s what gets me most excited: Seeing the reactions and seeing the amazing work that’s gone into this place.