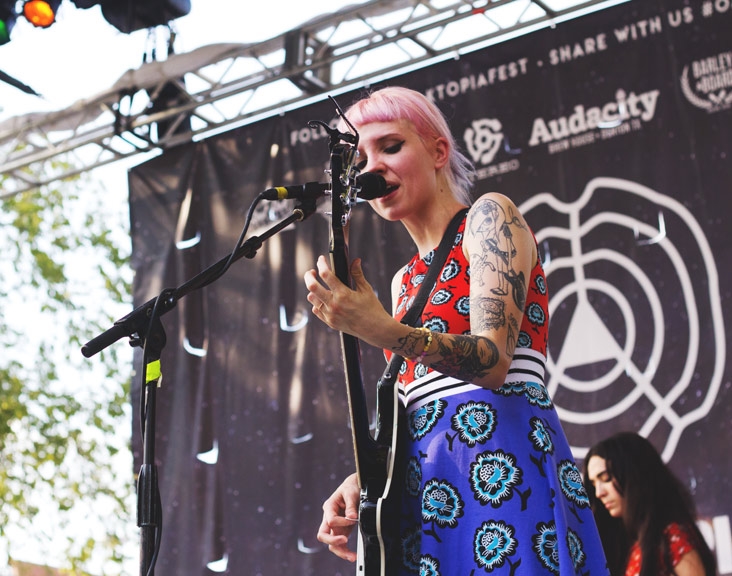 More Changes Are In Store For Denton’s Oaktopia And Thin Line Fests, The Live Oak Is On Its Last Legs And Pearl Jam Extends An Olive Branch To Its Local Ex-Drummer.

If there’s one constant in Dallas-Fort Worth, it’s music festival season. Nearly every week in this column around this time of year, we’re announcing another brand new fest or sharing the news that one of the repeat offenders is announcing its dates and/or lineups.

But things aren’t as steady going these days out Denton way, where nothing ever seems to stay the same. We’ve known for a minute that for the second time in four years, 35 Denton is taking a year off. That move would seemingly leave things wide open for the city’s other big fest, Oaktopia, to swoop in and further its claim as king of Denton’s festival mountain — except, well, the future of that fest is up in the air now, too, now that Oaktopia founders Matt Battaglia and Brent Camp have amicably parted ways with money man John “Sparky” Pearson. They’re currently looking for someone else to fund their fest.

“It wasn’t because of finances, wasn’t because we don’t like each other,” Battaglia recently told The Dentonite. “We didn’t have a falling out, we just decided to part ways.”

Still, this news does make for some uncertainty. Though Battaglia says his team should have no problem putting on the fest in September once it finds some backing, he’s still not sure where it will go down. Some in the media are guessing that Oaktopia could relocate to Deep Ellum this year, although we personally think it’s a tad irresponsible to run with that speculation at the moment.

Anyway, with two fest potentially down, Thin Line is all of a sudden maybe the last fest Denton standing, although it’s got some changes headed its way, too. In this case, though, they changes appear to be good ones. For its 10th annual run, Thin Line is eliminating tickets and fees if you want watch its documentaries or see its bands. The fest runs April 19 to 23 this year, and a full lineup of performers can be found here. Of note, the Wee-Beasties are listed among the acts slated to play, and the band says its currently jailed frontman Richard “That Guy Who Once Tried To Rob A Bank With A Note From Its Drive-Thru” Haskins will absolutely be out in time to make the show. Yay?

April will also find some changes coming to the Fort Worth live music scene. Reports the Fort Worth Weekly, West Magnolia venue The Live Oak is closing down at the end of April due to a combination of bad loans, mismanagement and rising rents. Its possible, says that same article, that a new version of the club might open up in Arlington at some point down the road.

Before it closes, though, The Live Oak will host a few more noteworthy shows, like the April 8 reunion show from local ‘90s alt-rockers Pop Poppins. Question: Is it still called a reunion if the band hasn’t played a show in several years but never “officially” broke up? Dunno, but tickets are available here.

Also happening in April is the Rock and Roll Hall of Fame induction ceremony. It’s something early Pearl Jam drummer Dave Abbruzzese has been perturbed about for months now after first learning that he — along with fellow ex-Pearl Jam drummers Matt Chamberlin and Jack Irons — were snubbed by the Hall.

“If there is still a part of that band that remembers how hard we worked, how much blood and how much sweat… They will do the right thing,” he wrote on Facebook months ago. “The members of Pearl jam have got to know what’s the right thing to do. They can’t justify ignoring my contributions. Like me or not.”

But now, with the date looming, the band has decided to address the situation by publicly inviting all five of its drummers to the ceremony. The aforementioned trio still won’t be inducted into the Hall of Fame, though, as that determination isn’t up to the bands, but solely the Rock Hall. The ceremony happens April 7, and airs a couple weeks later on HBO.

Like Abbruzzzese’s bandmates, red dirt radio station The Ranch recently caved a little as well. Last week, we mentioned the Fort Worth-based station’s decision to start incorporating more pop-country-oriented offerings into its playlists. After tons of outcry, program director Justin Frazell discussed on-air the fact that he’d dial back the change some.

Moving on, there were a boatload of new music videos released in the past week.

First up is T.Y.E., who once again combines his classically trained, operatic singing and hard-hitting rap on “Unusual.” It comes from his debut album, due out in June. We’re very much anticipating that one.

Meanwhile, Dance Dailey, who shot the above clip, was also behind the new video from Mel of The Outfit, TX. Does that make him the new Jeff Adair?

Next up is Terrence Spectacle’s new “Lone Dirt Road” clip, directed by Ciara Boniface. It comes from his five-track One Summer Night EP due out March 31.

Another new vid comes from Buffalo Black, this one for his track “Mega Man.” You can download the song here, and watch the T Aubry-directed, Bishop Cider Co.-set clip below.

Elsewhere this week, DJ Sober is getting rid of his entire collection of hip-hop records. And you can be there to buy them when he does on Sunday, April 9 at Off the Record.

Oh, and the Old 97’s return to the late-night circuit to perform on Conan tonight. Set those DVRs.

Oaktopia cover photo by Ashley Gongora. Got a tip for White Noise? Email us!