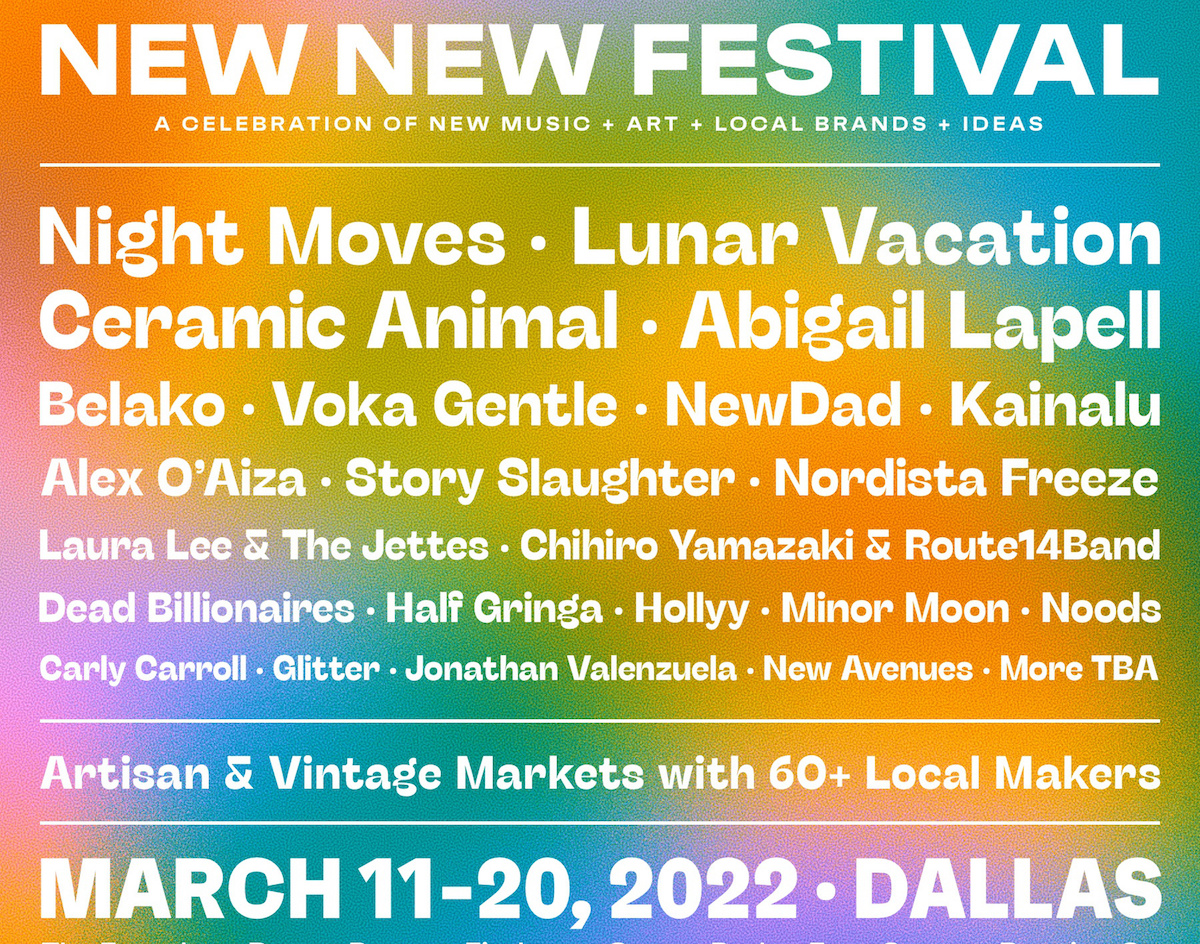 SXSW is about halfway done, and if you’re longing for the experience but don’t have the means to get your butt to Austin, let us recommend a new festival right here in Dallas.

Presented by Lively Local Markets, the New New Festival is a free showcase of 30+ new music acts, both local and out-of-town, across eight shows and 40+ artists with popup markets. It’s already kicked off on March 12, but it runs until March 20, so there’s plenty of time left to join the fun.

You can catch DFW acts NewDad, Taylor Teachout, Glitter, Alex O’Aiza, Gabriella Stella, Reverend Grey and New Avenues among other musicians from all over the place like Wisconsin, NYC, Spain and Norway.

The full schedule can be found on the festival’s website.

Speaking of shows, fans packed American Airlines Center last weekend to sing along to “Candle in the Wind,” “Have Mercy on the Criminal” and other classics.

Elton John is making the rounds for the last leg of his career farewell tour. His recent stop was Dallas proper’s last chance to see him live, but he’ll be back in September at Globe Life Park.

His final tour began in September 2018 with two sold-out shows in Dallas a couple months later. Now that about three-and-a-half years have passed, it’s time for him to phase into his last round of goodbyes.

Dallasites can continue to engage with the music scene from their TV screens, too. Snoop Dogg and Fort Worth native Kelly Clarkson are joining forces for “American Song Contest,” NBC’s latest show that’ll premiere Monday.

The show is a state vs. state contest that will span over the course of eight weeks, and delegates from each state will perform a new, original song. By the end of it, one state will be crowned in this Eurovision-inspired show.

Will Texas take the cake? There’s only one way to find out.

On another note, Post Malone is tied up in a five-figure lawsuit after his Bugatti (which has made multiple music video appearances) was supposed to be purchased in 2019 by a Nevada man for $3.5 million cash but the auto broker broke their contract.

The March 9 lawsuit states that on March 3, the auto broker promised the buyer he could buy the vehicle that’s supposedly stored in Utah for $3.5 million over an email contract. Shortly after, someone else brought forward a higher bid, despite the original buyer having until March 4 to pay.

The lawsuit is still unfolding, so stay tuned.

Looking at our more local scene, Opening Bell Coffee turned into a concert venue last weekend for a benefit concert raising money and awareness for Ukraine. Paschal Hall, the shop’s owner, took on the show to support the members of the Ukrainian community, one of whom is a member of the shop’s staff.

Donations were sent to the United Ukrainian American Relief Committee, and donations were accepted online and in store, with 15% of all sales from that night going to the case. Steve Jackson hosted the show with 12 other performers on the scene for the three-hour show, which raised $3,142.

This won’t be the last benefit concert Dallas sees for the cause, so keep an eye out for different opportunities to support.