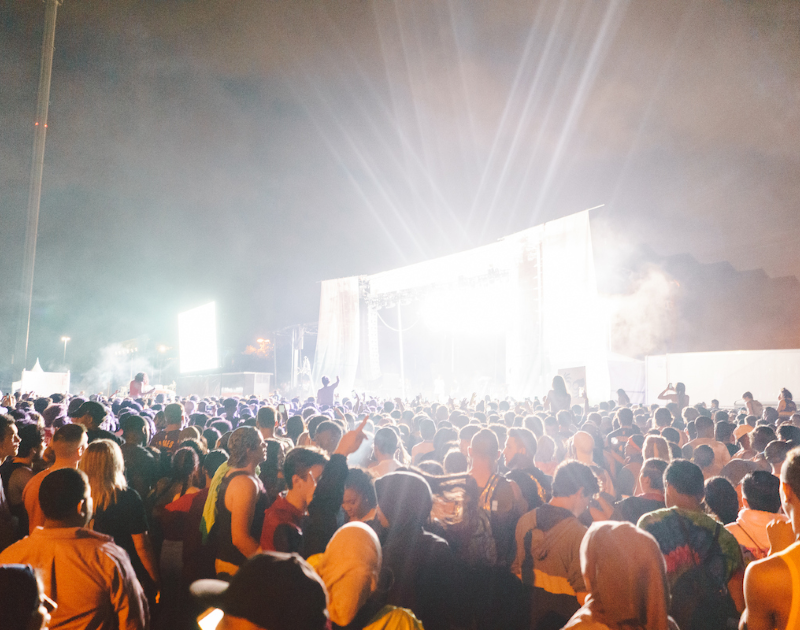 ScoreMore Hits The Majors, Cody Jinks and The Gritz Launch Their Own Festivals, Post Malone Duets With Dwight Yoakam and More.

But it’s also fair to say he’s typically always managed to exceed our high expectations — both for him and his ScoreMore Shows brand.

We knew he was going places when, in a 2012 feature on the then-22-year-old, we referred to him as “the preeminent hip-hop talent buyer in all of Texas.” And now that Live Nation Entertainment has acquired a majority stake in ScoreMore, he immediately becomes a major player in the national hip-hop realm.

After booking small shows while attending the University of Texas, the company Guttfreund co-founded with Claire Bogle in 2010 quickly grew thanks to a business model that brought in rising underground hip-hop acts — like before-they-were famous Kendrick Lamar, Wiz Khalifa, Mac Miller and Chance the Rapper — to Texas tours through Dallas, Austin, Houston and (sometimes) San Antonio. These days, ScoreMore’s JMBLYA festival, now in its sixth year, routinely draws tens of thousands of fans to Fair Park, as well as to its additional stops in Austin and Houston this year.

“We started ScoreMore as teenagers and friends simply booking the artists we loved and believed in,” says Guttfreund says of the news via press release. “Our success is the by-product of a talented team of like-minded individuals working together to build something special. ScoreMore has been very fortunate over the years in having many clients and partners who have been and continue to be loyal to us. Most importantly, we would not be where we are today without our incredible fans in the state of Texas and beyond who have continued to support our events for nearly a decade. We are so excited about this new chapter for ScoreMore in having the resources, support and partnership of Live Nation. To have gotten our start in Austin, and ultimately be in business together with Live Nation is honestly a dream come true.”

In other fest-related news, a couple of locally-based acts are launching fests of their own, we recently learned. Joining the likes of Toadies and Old 97’s that have curated respective namesake fests for a number of years now, will be Fort Worth’s Cody Jinks and Dallas’ The Gritz.

Later this month, Erykah Badu bandleader RC Williams and his The Gritz band will host its inaugural Gritznic in the historic Longhorn Ballroom’s newly-revamped backyard. The picnic-style event (said to be inspired by The Roots Picnic in Philadelphia) will feature, per its own literature, “local, regional and national acts representing the eclectic projects and side gigs of the multi-faceted members of The Gritz. Each set will feature multiple acts, jamming together on each other’s tracks — and perhaps a few covers, as well — promising a one-time-only experience for attendees.” Tickets to that June 30-set fest-nic are currently on sale here.

In another bit of fest news, it seems Post Malone has been tapped to co-headline the Jay Z-curated Made in America festival in Philadelphia this Labor Day Weekend. Speaking of Post, he was also interviewed by Dwight Yoakam on Monday night’s edition of the country legend’s SiriusXM show Greater Bakersfield. Of course, the real gold here is watching the pair duet on Yoakam’s “A Thousand Miles From Nowhere.”

Moving on, S1 and Lonestarr Muzik offered up a master class for prospective SoundCloud Rap producers as they peeled back the curtain on their “Saved by the Bell” track from Lil Xan’s breakthrough Total Xanarchy LP, giving some unique insight into the genre, as well as pretty thorough FL Studio tutorial.

Also stripping things back this week was Charley Crockett, who was invited on NPR’s “World Café” to talk about his upbringing and perform four live cuts from his latest LP, Lonesome as a Shadow.

Meanwhile, on the sixteenth episode of the locally-based Dogger & Muddy podcast, Texas Rangers radio announcer Eric Nadel drops by to talk about his love of music and the role it plays in his charity work.

Keeping things rolling, we’ve got a handful of new videos to hip you to. First up is Leon Bridges’ clip for “Beyond” from his critically and commercially hailed sophomore record Good Thing. It comes right before Bridges performs in Irving this weekend at the Toyota Music Factory and was directed by Josh Goleman, who has previously worked with acts like The Avett Brothers, The Black Keys, Pearl Jam and Willie Nelson, to name a few.

Next up is Claire Morales, whose new solo record comes out at the end of the month. In this first taste of things to come, Morales and her pals get a little fresh with their food. “Warning: lots of hands touching Jell-O, you might get some funny looks if you’re watching this in a public place,” Morales says of the clip. “It’s not exactly not safe, but it’s not exactly safe either.”

Meanwhile, the Arlington-and-proud Big Red Ants take a road trip down to Austin to play a show in UTA gear in their new video.

Meanwhile, the new Cut Throat Finches video for “New Age” features appearances from a couple Funky Town notables. Why, yes, that is Lola’s Saloon owner Brian Forella playing the Uncle Sam character. It also features  a look at the historic Downtown Cowtown at the Isis, the 1930s Art Deco theater currently deep in the throes of restoration.

Then there’s this new video remix of old tunes by Pantera and Bill Withers. The work of one Bill McClintock, the “Mouth For War” and “Use Me” mashup is too good not to share.

And, finally, before we leave you this week, we’ve got a few quick-hitting notes to dump on you:
• Fabio Luiski is the new music director of the Dallas Symphony.
• Jason Eady’s new record, I Travel On, is due out August 10.
• Scott Danbom is releasing his first solo album, under the name Static Diary, at the end of July.
• Wheelhouse has a new, weekly vinyl DJ brunch featuring The Good Taste Collective. Good Taste Sundays kicks off this Sunday and runs from 11 a.m. to 2 p.m.