Where Are People Getting Killed In Dallas? (2020 Edition) 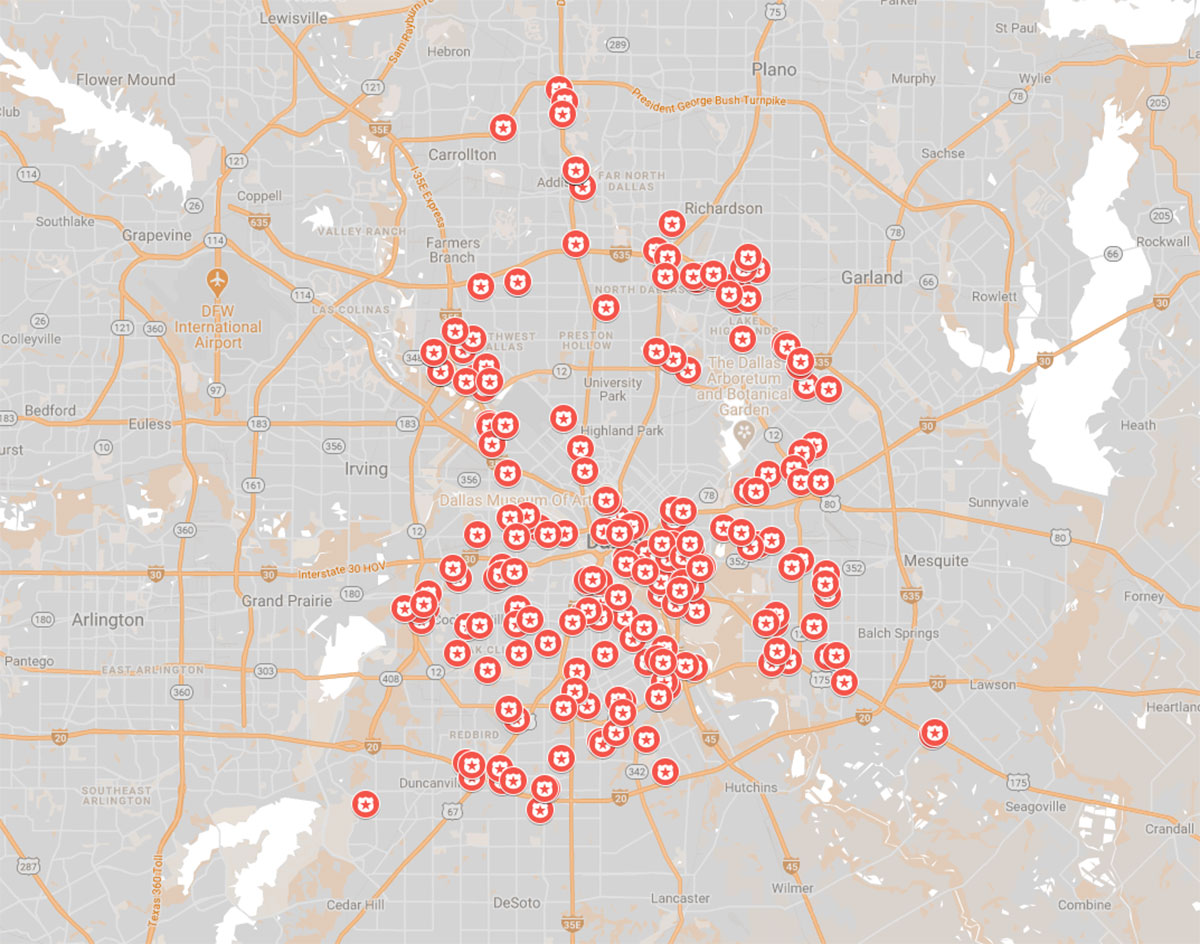 Dallas Is On Pace To Post Its Highest Homicide Count Since At Least 2004. Here’s A Map Showing Where These Murders Are Happening Around The City.

Earlier this week, the Dallas Police Department confirmed the city’s 227th homicide of the year.

While our city’s homicide detectives appear to be doing a decent enough job of investigating these cases — the Dallas Police Association claims DPD has a homicide case clearance rate of around 75 percent in 2020 (up from the national average of 61 percent) — many local politicians, most notably Mayor Eric Johnson, are still clamoring for more action to be taken in response to these killings.

Worth noting: Despite openly downplaying the notion of a “public safety crisis” while campaigning for his gig in 2019, Johnson’s tone on crime has significantly changed since he was elected mayor. During his annual State of the City address earlier this week (texts chunks of which he later shared on social media), Johnson once again stumped — as he so often has of late — about the need for improvements in DPD’s crime response.

While there’s no doubt that any and all homicides are horrific, and that it is certainly jarring to hear Dallas is tracking to hit its highest murder count since 2004, a little perspective can go a long way on this front.

For instance, it’s important to note — as we did with our recent look at the city’s annual homicide figures dating back to 1930 — that these annual murder counts are still significantly down from the figures of the 1980s and early ’90s, when Dallas regularly topped 300 homicides a year and peaked with 500 in 1991.

Similarly, it’s vital to simultaneously recall that Dallas’ population has continued to greatly grow over time, making simple tallies such as these less important than they initially appear; in actuality, the city’s per-person homicide rate is comparably down rather significantly from the violent days of yore.

Just the same, local leaders continue to make plenty of noise about the homicide spike narrative. But beyond actually increasing DPD’s budget this year in the face of public cries for the opposite, any plans to cure these ills remain something of a work in progress.

One strategy recently laid out by DPD’s top brass was to up its patrols in four targeted “hotspots” of violent crime across the city. The implication here is that cops believe that slowing murders in what they deem as high-volume areas will lower the overall citywide figures. While there’s perhaps some merit to that belief, the premise of this strategy raises an obvious question: Are Dallas’ murders all happening in predictable locations?

Not really, turns out.

As last year’s map on the matter also showed, this year’s map — embedded below and maintained by WFAA, which based it on on data through November 20, 2020 — shows homicide to be a citywide concern, at least geographically.

In other words, location is just one factor out of many when it comes to murders in Dallas.

Or, put another way: It’s the why and the how behind these crimes — the social circumstances that led to them — that are of greater concern than there where of it all.

The map still makes for an interesting look-see, though.