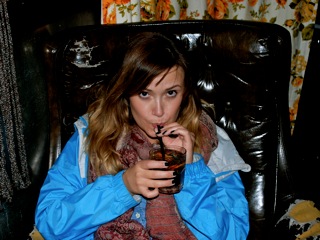 In Which We Send A Group Of Uptowners Down To Deep Ellum.

Everyone knows that Dallas is a pretty self-segregated city, and not just racially, but in nightlife, too. So, this week, we decided to attempt something of a social experiment. On Saturday night, we sent a group of Downtown revelers to McKinney Avenue and a group of Uptown party-goers down to Deep Ellum. Below, read about one of our writers' experiences along McKinney. Read the experiences of our Downtown girl on McKinney Avenue here.

Though I loathe admitting it, I guess you could call me an Uptown girl. I live in Uptown, I dine in Uptown, and on the weekend — and lets be honest, some weekdays — I get hammered in Uptown.

But years of same ol', same ol' have left us bored, and we've been itching to explore new territory. For months, we've been talking about going to Deep Ellum, to revel in cheap drinks and bearded, plaid-clad men. This weekend, we finally bit the bullet and dove in headfirst.

The group was five-deep, with only two members ever having gone out in Deep Ellum before. When asked what the expectations for the night were, my friends' answers ranged from “I think its going to be weird!” to “I think we will feel out of place!” to “I'm really excited!”

One thing was for certain: We all agreed it would be the “Antithesis of McKinney.” And there were some anticipations we could agree on, among them finding Bearded Beaus, a New Hole-In-The-Wall Spot, a Good Late-Night Food Spot, and the relief of not encountering a pair of khaki pants or Sperry topsiders.

The night started with dinner at Monica's where our group got good and lubed up on low-calorie Margaritas. (You can take the girl out of Uptown but…) From there, we braved the rain and walked the three blocks to our first bar stop, Anvil Pub.

While stumbling along the uneven sidewalk and trying to be as discreet as possible so we could blend in with the “locals,” a single phrase betrayed us: “I hate walking, where's my cab?”

Despite it's musty smell and low capacity — most likely due to our 10:30 p.m. arrival time — the Anvil Pub was a hit among my friends. Dimly lit, wood-paneled half-booths and roomy tables make it the perfect place for chatting with a group of friends over strong drinks. Friendly bouncers even gave two members of our party cigarettes and, weirdly enough, they even had pink mittens handy, which they were happy to give up. The amicable staff and laidback atmosphere led the group to remark that more such places were needed in Uptown. This belief was reinforced tenfold when a pair of Jameson Irish Whiskey representatives came round to our table offering free mixed drinks and a chance at playing the world's easiest trivia game. I won a free shirt. Baller!

While we knew we were in Deep Ellum, the coziness of the bar made it feel familiar — but that's not to say it didn't have distinctive features. The most endearing thing was perhaps the bike rack inside the bar. One could only dream of encountering such a wonder in Uptown.

Next on our list of locales was Reno's Chop Shop Saloon. We were prepared to be out of our element — my Central Track colleagues had given me the Reno's assignment with sneaky grins on their faces and high-fives all around — but, really, nothing could have prepared us for what was inside.

The group exchanged collective “What are we doing here?!?!?” glances as we inched our way towards the bar, crowded with leather-clad biker types.

Cried out one of my friends: “Have you ever seen Sons of Anarchy? I feel like we're in it.”

Our trepidation abated when the tab for two whiskey cokes turned out to be $6. Yes, for both. That's $3 a drink and that's pretty remarkable. It's like we had found the holy grail of cheap Dallas bars, hidden at the end of a tattoo-covered, beer-stained obstacle course. We were excited at the mention of live music in the back of the bar, but were put off by the blast beats and $10 cover upon arrival. And while we agreed that the $3 super-stiff mixed drinks were stuff of legend, we kinda couldn't wait to leave, burdened with the knowledge that we looked like (read: were) absolute and total poseurs.

The last stop on our journey? The famous Double Wide, once described to me as the Cheers of the Dallas music scene. Literally a doublewide trailer converted into a bar, the walls are covered with stuffed animal heads and the air is saturated with kitsch.

One glance around the place and our bearded-men quota for the night was met. Though pricier than Reno's, the $4 mixed drinks were still a steal, and, after one taste of the Yoohoo Yehaw, a frozen White Russian made with Yoohoo chocolate milk, my heart had been won.

At this point, after three hours of bar hopping at places 50 precent cheaper than our usual haunts, the night became fuzzy. What I do remember was fucking awesome, though. I finally understand what all the fuss at the Double Wide is about. The icing on the cake was the food truck parked out front selling gourmet sliders — or, as I call them, “happiness.”

On the way home, we made one more pit stop — this time at Serious Pizza, seller of the most behemoth pizzas I have ever seen in my life, and I'm from Chicago, so that's saying something.

With our bellies full and our vision blurry, we piled into a cab and headed north, lamenting the end of the night and our inability to snag a tattooed lumberjack type.

Though details are hazy, the next day's hangover suggested that the night was a raging success, and our fish-out-of-water experiment had a happy ending — a plan to return to Deep Ellum next weekend.

Hell, with prices like that, I'd even consider pregaming at Reno's. 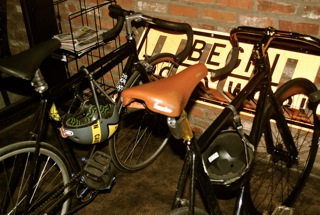 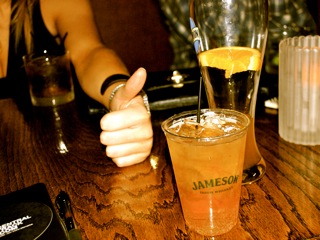