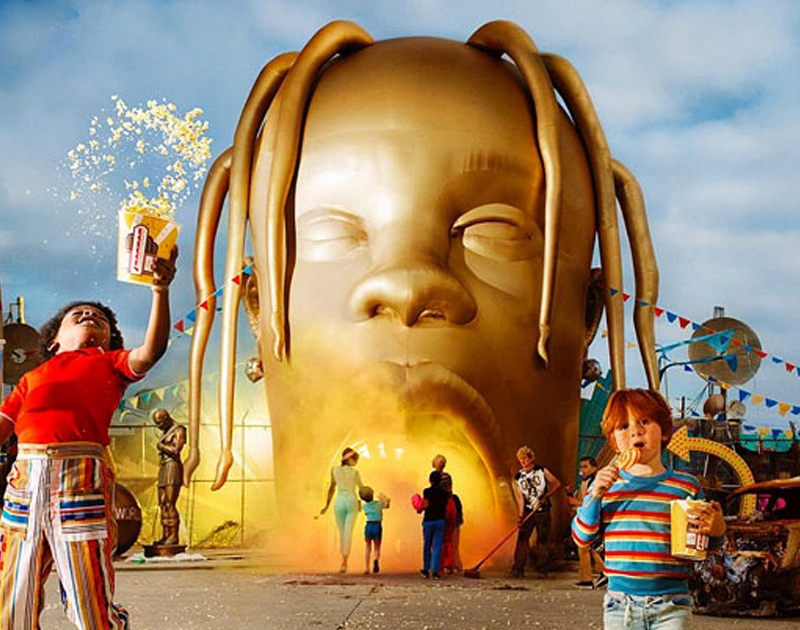 The Houston Rapper’s New Astroworld Album Is A Star-Studded Affair That Places North Texas Legends Alongside The Likes Of Drake, The Weeknd And More.

Overnight, Travi$ Scott dropped his third LP, Astroworld, which quickly rose to the No. 1 spot on iTunes’ charts.

That’s not altogether shocking: The Houston-born rapper is one of the hottest commodities in the rap game these days and, as if his own star power weren’t enough to propel this album to the top of the charts, this latest collection of songs features collaborations with an interesting pile of A-list collaborators including Drake, The Weeknd, John Mayer, Frank Ocean, 21 Savage and Thundercat, among others.

Just as much of a head-turner is the fact that a couple of big-time Dallas notables similarly popped up on the album without much warning.

Granted, one of those contributions shouldn’t come as a surprise at all. For years now, the North Texas producer Cardo has been crafting hits for the biggest names in hip-hop — including Scott, with whom he most recently worked on “Big Shot” in collaboration with Kendrick Lamar for the Black Panther soundtrack. On Astroworld, the rapper and producer again link up on the album’s 14th track, “Who? What?”, which was co-produced and co-written by Cardo along with 30 Roc, and features Migos members Quavo and Takeoff.

The placement is a nice score for the North Texan born Ronald LaTour, but the song has a long hill to climb if it’s to become Cardo’s most high-profile production credit of the year. After all, he’s also the guy also responsible for producing “God’s Plan,” the lead single from Drake’s record-breaking Scorpion LP.

Far more of a bombshell is the fact that Astroworld‘s second track, “Carousel” is features an introduction from Dallas legend Big Tuck.

Tuck’s appearance at the top of the song, produced by G.O.O.D. music affiliate Hit-Boy, isn’t totally random. His introduction is an almost verbatim copy of the intro he used on his own 2008 song “Not A Stain On Me,” which sampled the same Beastie Boys song (“The New Style”) that Hit-Boy turned to in crafting this Travis Scott track.

After “Southside Da Realist,” “Not A Stain On Me” is likely Tuck’s second best-known track, having peaked at No. 72 on Billboard‘s Hot R&B/Hip-Hop Songs chart. It’s likely, given the nod the song just received from one of brightest stars of this rap generation, that “Not A Stain On Me,” is about to receive an uptick in relevancy once more. Here’s hoping that’s the case, too, as the iconic Dallas track still goes hard as hell.

Need a refresher on the decade-old track? Give it a listen:

And, if you’re curious, the Beastie Boys sample at the center of all this comes in at right around the 3:23 mark in this song:

Going from the Beastie Boys to Big Tuck to Travis Scott? That’s a pretty incredibly lineage for a soundbite, no matter how you slice it.

Props to Scott for extending that legacy — and while contributing to Cardo’s at the same time.