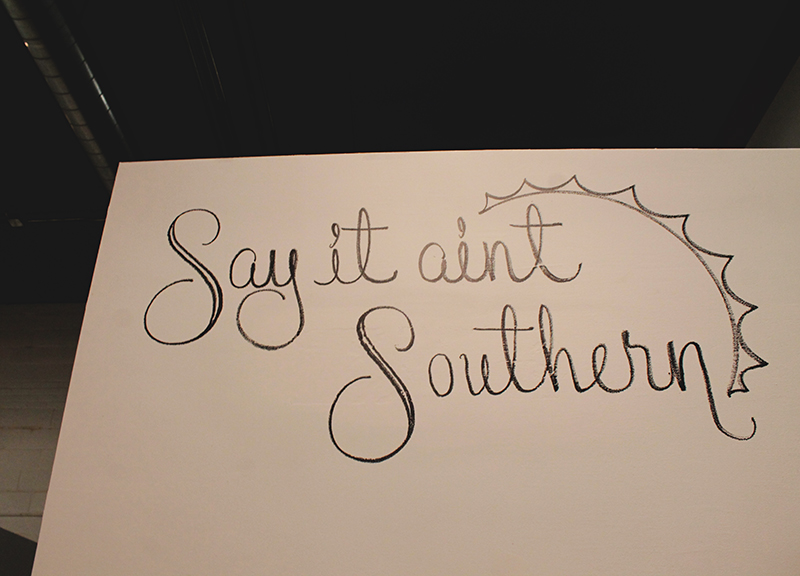 As the fruits of modern street art were put on display a couple blocks south on Malcolm X, the other Saturday night art exhibit opening featuring the visual works of DJ Sober — and, one assumes, the one he cared more about given the fact that this was the one he personally was curating — went down in Deep Ellum's The Public Trust gallery, touching on similar themes but ultimately bearing an entirely separate appeal.

Let it be known: This show — called Say It Ain't Southern in honor of the zine of the same name and concept that the man born Will Rhoten was releasing on this night — differed from that other one. On the whole, Rhoten's exhibit takes a more backwards-looking approach to the concept of public art.

Celebrating all things Southern and focusing most specifically on the realms of train graffiti and hobo art, Say It Ain't Southern boasts the works of some two dozen artists that Rhoten has personally encountered along the way in his decades-long obsession with graffiti. In turn, this showcase, along with the zine it celebrated (and quickly sold out of)), acts a labor of love for not just for the man behind it, but for its other participating artists as well.

Which makes sense: To a degree — and especially when compared to the stark rise of street art forms such as plastering and stickering — train graffiti and hobo art are lost forms, once-sexy and fairly dangerous modes of expression that have lost some of their luster as time has started to forget them. These on-display artists, however, are of the ilk that still wants you to remember that past — and Say It Ain't Southern, which touches on the progressive but somewhat surprisingly trends more toward the folksy end of the spectrum, recalls this form beautifully.

This charming reverence can most obviously be seen in the show's centerpiece installation, in which Rhoten and his collaborators converted the gallery's free-standing back wall into a mock train car — a giant, yellow, eye-grabbing piece that hovers over the show as a whole, serving as a constant reminder of its overall inspiration. Perhaps fittingly, it impressively stands to tie together the varied works seen throughout The Public Trust's walls to a single track.

Better yet: It'll be stationed at The Public Trust for a few more weeks; Say It Ain't Southern chugs along in Deep Ellum through October 12.