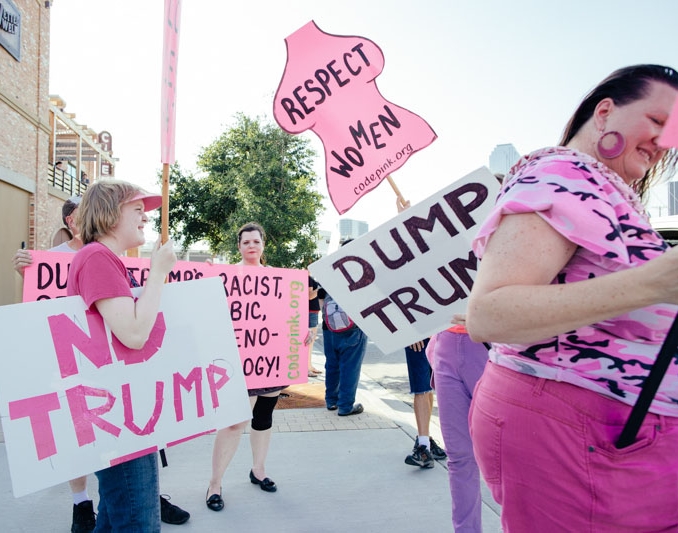 Hail To The Chief.

Saying no to the boss? It can be a tricky thing. But with these strategies, you can pull it off and avoid taking on additional tasks while at the same time not seeming like you’re trying to skirt your responsibilities.

Either way, you’re going to want to try it, because you don’t want to add anything else on your plate this weekend. You certainly don’t want to be too busy working that you miss out on all this goodness. — Cory Graves

Billy Joe Shaver at Granada Theater
The self-professed “wacko from Waco” never became the big name that his peers like Waylon Jennings, Willie Nelson or Kris Kristofferson did, but the songs he penned for them and others became some of the biggest standards in ’70s country music. The largely Shaver written album Honky Tonk Heroes helped carve out the outlaw image Waylon Jennings will forever be known for. Eleven Hundred Springs and Vincent Neil Emerson open. — CG

Inauguration Rally and March at Dealey Plaza
So, this anti-Trump march was initially set to go down at City Hall, but turns out there’s already another march going on over there. So this one moved. Guess there are plenty enough unhappy with our new orange leader to go around. — CG

Chippendales at House of Blues
Vegas’ iconic male revue is back for its annual sexed up swim through town, which gives us an excuse to link to this video yet again. Timeless. — CG

The Derailers at Magnolia Motor Lounge
Though the Austin-based band’s recorded works don’t necessarily carry quite the level of clout that they did a decade ago, it makes sense that two of their best-known albums would be live recordings. Ten years removed from losing their original vocalist and primary songwriter, Tony Villanueva, the Bakersfield sound-adoring honky-tonk outfit has remained something of a force to be reckoned with — in a live setting, anyway. — CG

Dylan LeBlanc at Dan’s Silverleaf
Dylan Leblanc’s music sounds meticulously crafted, yet its executed without much of a notice. Like numerous singer-songwriters before him, Leblanc channels the pragmatic sensibilities of a blue collar worker. Whether or not the musician has firsthand experience in that line or work, he sure knows how to make it sound convincing. — Calvin Cashen

Pat Green at Billy Bob’s
Pat Green is one of the most famous Texas country musicians going. He started self-releasing his music in the mid-’90s and reached a huge amount of fame in the early oughties with Wave on Wave, some would say to a detriment, calling him a sellout after signing with Universal. But Green is back to his roots now and making the music he wants — at the world’s biggest honky-tonk, no less. — Paul Wedding

Risk! at Sons of Hermann Hall
Since 2009, Kevin Allison (The State) has been boldly telling true tales about his life, the kind he never thought he’d ever repeat in front of other people, in front of audiences that watch him live or download his podcast — and convincing others to do the same! — CG

Seratones at Three Links
Shreveport’s Seratones will heat up Links on Friday night as the female-fronted outfit look to restore your faith in the power of rock ‘n’ roll. Atlantis Aquarius and Oil Boom open. — Diamond Victoria

Infest at Dada
Cali power violence band Infest has only played a handful of shows since breaking up in 1991, one of the most recent of which was a one-off in Dallas at roving venue Vice Palce. Here they are doing a proper venue show this time. P.L.F., Backslider, Escuela, Terminal Nation, Kept In Line and Nihilistic Fit open. — CG

Lead Belly’s 128th Birthday Party at Deep Vellum
Huddie Ledbetter is one of the biggest reasons Deep Ellum – and by extension, Deep Vellum — has its name. His ”Take a Whiff on Me” was one of the earliest popular songs to use the word Ellum to refer to Elm Street. In honor of his birth, the book store is converting to a pop-up juke joint. — CG

Band Together Denton
Partly in response to the lack of rooms in Denton hosting all ages shows these days, house show festival Band Together Denton will feature 60 bands (like Heavy Hands, Pearl Earl, Mink Coats and New Science Projects) performing across 10 different houses over the course of the two days. — CG

Django Reinhardt Festival at Arts Fifth Avenue
With but two good fingers, Django Reinhardt crated a new technique of guitar playing now referred to as “hot” jazz. The festival will celebrate his life and legacy including three nights of film, music and French cuisine, as well as gypsy guitar clinics on Saturday and Sunday afternoon. —PW

Countdown to GAPCo.’s Second Location at Goodfriend Beer Garden and Burger House
Greenville Avenue Pizza Co. is opening a second location, one not on Greenville Ave, but over in Casa Linda. They’re throwing a countdown party here, giving away T-shirts and stuff and otherwise getting the neighborhood psyched for their arrival. And they should be, that pizza crack, though, damn. — CG

Iliza Shlesinger at Majestic Theatre
Dallas’ own Iliza Shlesinger is about to take over the comedy game. Already one of the hottest comics in the country, Shlesinger is set to continue her fast rise on the heels of Confirmed Kills, the special she dropped on Netflix on September 23. But that’s just the tip of the iceberg. The Greenhill alum and Last Comic Standing vet is also these days starring in a digital series for ABC called Forever 31. Better yet, she’s about to embark on a national stand-up tour — one that finds her returning to the town in which she was raised. — Pete Freedman

Miranda Sings at Verizon Theatre
Comedian Colleen Ballinger is, for the most part, an unknown entity. But her Miranda Sings character? She’s a total icon — well, to a certain set, anyway. Not only is Miranda Sings one of the most popular personalities on YouTube, but she’s also gotten the nod of approval from one Jerry Seinfeld. As grating bits go, this one’s pretty damn grating — although, I suppose, that’s where the point and the implied humor lies. Regardless, expect a bunch of kids at this showcase. Remember: YouTube audiences are always younger than you expect them to be. — PF

Dr. Strangelove at Inwood Theatre
Stanley Kubrick’s absurd dark comedy remains sadly timely in 2016 as our leaders continue to get us involved in foreign conflicts that just make things worse. But for a movie that’s only slightly more ridiculous than real life and features ones of the bleakest and best movie endings ever, it’s still howlingly funny. Remember, gentlemen: You can’t fight in here. This is the war room. — Kip Mooney

Atmosphere at The Bomb Factory
The Minneapolis duo Atmosphere has been holding down the underground rap scene since the late ’90s. Since then, Slug and Ant have put out eight full-length studio albums. The group’s last album was released in 2014, and included the single and video “Kanye West,” which features a little old man and a young woman robbing convenience stores. It’s really kind of beautiful. Brother Ali, deM atlaS, Plain Ole Bill and Last Word open. — Roberto Aguilar

Lemuria at Three Links
If there’s anything negative critics have to say about ’90s adoring Brooklyn indie outfit Lemuria, it’s that they manage to sound too much like their DIY/fuzz rock heroes from two decades ago. Cayetana and Mikey Erg open. — CG

Colt Ford at Gas Monkey Bar N’ Grill
Colt Ford is the genius that decided to combine bro country and rap. Hmm, country plus rap, seems like there should be some sort of abbreviation for that. Rountry? Nah, that doesn’t sound quite right. Oh well, we’ll think of it. — CG

Midge Ure at Dan’s Silverleaf
The Band Aid/Live Aid/Live 8 co-founder will take a break from saving the children/ending world hunger for the night to perform some tunes. — CG

Blackfoot Gypsies at Sons of Hermann Hall
When our buddies in Somebody’s Darling moved up to Nashville a couple years ago, we asked them what their favorite bands were from their new hometown. The answer? Blackfoot Gypsies, and it’s easy to see why. The band plays a similar brand of dirty Southern bar rock with glimpses of classic rock and Americana subtlely mixed in from time to time. — CG

Fight To Win Pro 22 at NyTex Sports Centre
The hockey/roller derby venue is going all MMA for the evening, hosting all manner of fighters from various styles going after it in an octagon of some sort — y’know, unless that shape is trademarked by some other promotion. — CG

Felix Da Housecat at It’ll Do Club
Felix is no ordinary house cat. You best wear your boogie shoes because — and trust us on this one — dance-offs will ensue. And with a sound system like It’ll Do’s, there will be no hiding in the corner. Don’t fight it. Just get your back up off the wall and get down on it! — Zoe Mattioli

Afu, Darkbird, Dumb Waiter, Death Stairs at Crown and Harp
In the same vein of Sudie and Rat Rios is another newcomer to the local pop scene, Afu. Like those two well-loved artists, she’s not afraid to mine ’90s aesthetics while pushing them forward with (sometimes lo-fi) effects and production values once again making them fresh. And like Rat Rios, you’ll notice she collaborates with Honor System on one of the tracks we featured here. Anyway, she’s been popping up on some King Camel bills lately, and has another one coming up at Crown and Harp this weekend. — CG

Kixpo Thunderstruck Capsule at Epocha
Sneakerhead expo Kixpo celebrates 10 years in the game with some very limited edition releases. Line up like yesterday, yo. — CG

Eastside Taco Ride at The LOT
The Taco Stop in the Design District has a rack of coats out front with a sign that reads, “Are you cold? Take one. Do you want to help? Leave one.” So, the goal here is to take one that way to leave. And to ride bikes. And to eat tacos and drink beer and fellowship with fun-loving, do-gooding buds. — CG

The Taste of Sound at Tutta’s Pizza
Celebrity chef Patrick Stark’s Mohawk Militia (a charity that provides non-GMO food and recipes to underprivileged families) are raising money for their cause with this charity dinner. Your $75 gets you four chef-prepared courses, drink specials and a band. — CG

Dallas Women’s March, Rally & Mega Phone Bank at Dallas City Hall
Another march against President Pussygrabber starts at City Hall at 10 a.m. and covers the 1.7 miles of ground to CWA Hall, “marching for women’s rights, social justice and equality for all communities.” Something that’s more important now than ever. — CG

Bill Maher at Music Hall at Fair Park
Test your limits with the boundary-stretching comedic stylings of Bill Maher at this one. Notorious for his political commentary and cheeky observations on his HBO show, Real Time with Bill Maher, he’s sure to make you laugh, think and take an honest look at life. He’ll probably even manage to push a few of your buttons in the process. — Porttia Portis

Fort Worth Artist Salon at Fairmount Community Library
Piggybacking off its monthly poetry meetings, writers and artists of all types are invited to participate in this new monthly creative meeting. The goals are simple: to create, share and talk with likeminded neighbors. — CG

Cover photo by Kathy Tran. To find out what else is going on today, this week and beyond, check out our event directory.