Things To Do On Tuesday, January 13. 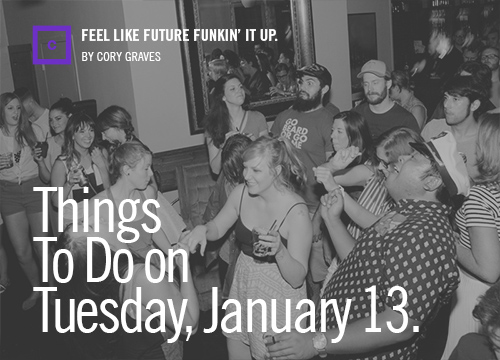 Want to start attending the most exclusive, A-list shingdigs even though you're admittedly D-list at best? It's pretty simple to do, actually, says the Internet, so long as you can gussy yourself enough to look possibly rich, and then just don't act like a pussy.

Rubbing elbows with celebs isn't always all it's cracked up to be, however, and sometimes hiding out in darkened movie theaters or other low key locales is preferable. If the common people route sounds more your speed tonight, we know a few places to head.

The King and I at The Magnolia
This five-time Academy Award winning musical from 1956 not only features a Yul Brynner at the very top of his game, but some of the most elaborate sets in film history and a boatload of classic tunes you've heard countless times before, including “Getting to Know You,” “I Whistle a Happy Tune,” “Hello, Young Lovers” and “Shall We Dance?” to name a few.

Tuesday Tease at Sue Ellen's
Sure there are plenty of other weekly drag events that go on in this town, but none of them hold a candle to Tuesday night's at this two-story, predominantly lesbian bar. Enjoy the go-go and line dancing all you want, but it is the burlesque queens and drag kings that truly rule.