Things To Do On Thursday, July 28. 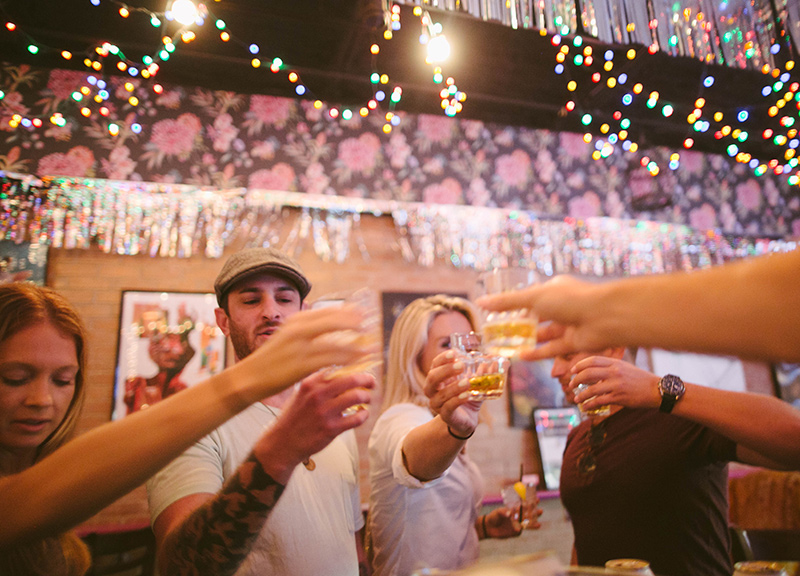 Add Some Variety To Your Week.

This week’s Democratic National Convention was indeed a historic one. The Delegates on the floor voted Hillary Clinton for president of the United States making her the first woman candidate nominated by a major political party. That’ll surely nip her skeptics where it hurts.

Ignoring personal preference, if you’re like me, all this talk of politics ails you to no end. Of course, the best way to sooth all this political tension is with a laugh, a stiff drink and a washed-up rock band whose only hit is a Michael Jackson cover — all the key ingredients for a decent night out. Here are a few much needed, but temporary distractions to help you get through the week. — Calvin Cashen

KXT Sun Sets at Dallas Power & Light Pool (Sold Out)
Like each of the intimate poolside sets in this summer series, this edition featuring Madisen Ward & Mama Bear and Charlie Crockett is sold out. That said, if you want to see Fantastic Negrito here next week, you better act quick. — Cory Graves

Rockin’ the River: Zane Williams at Panther Island Pavilion
Land ho! After a few weeks of being banned from the water due to E. coli, this week’s edition of Rocking the River will have tubing on the Trinity, drinks, live music and Zane Williams headlining while you float alongside that dead rat, or whatever else is in that slimy river. — Sidney Johnson

Oh, Snap! at The Whippersnapper
For the second time now, Central Track and The Whippersnapper are teaming up to present a new variety show concept where everything and anything goes. This month’s edition features a live power hour performance from 60 Minutes In Heaven, stand-up comedy from Brad Lacour and Scott Crisp, DJ sets, art and a few other random acts of entertainment. No cover. Drink specials all night. Let’s do this. — Pete Freedman

Art Con(cert) with Neonnoah and Honor System at Kirk Hopper Fine Art
Once again, Art Con brings local artists together in a fixed setting for a gallery style art exhibit and live performances. For Art Con(cert)’s third installment of the year, indie pop band Neonnoah will perform surrounded by the work of numerous local artists. — CC

Backyard Market: After Hours at East Side Denton
The sun will set and the Denton public will emerge for a night replete with unique products and good times. Feel free to rummage through all the vendors setting up shop this Thursday or go at a slower pace with beer in hand. Either way it’ll be lit. — CC

Alien Ant Farm at Trees
When that “Smooth Criminal” cover hit the airwaves back in 2001 you couldn’t tell the middle schoolers’ nothing, that was their jam. Now, 15 years later, the band is back and those that were once kids have their own booger factories at home, go figure. — SJ

West End Wine Walk
This is the first of its kind — in the West End district, anyway. Like the numerous other wine walks in other neighborhoods all over town, this is a chance to walk with your fellow wine enthusiasts through the city for happy hour in given bars and shops. Brush those purple teeth after. — SJ

Denton Comedy Fest Pre-Show at Killer’s Tacos
Denton’s inaugural comedy festival is rooted in the DIY thing, a mentality that’s deeply embraced by its art scene. The festival will kick off its first of five stand-up showcases at Killer Taco’s in Denton, so you can share a laugh and a taco. — CC

Pop-Up Event at Scout Design Studio
Funky Wright Designs is opening its doors for you to give them your money. But seriously, they’re showcasing a new textile collection and want you to check it out. You just might find what you’ve been looking for. — SJ

Run for the Blue 5K at Trinity Groves
What better way to honor Dallas’ Police Department than with a communal 5K marathon through Trinity Groves? Registration is free, of course, so you can get an extra kick of energy knowing you’re not blowing your hard earned cash. Although, you should feel inclined to make a donation. — CC

Ninkasi Last Band Standing: Bad Mountain vs Vodeo at Harvest House
The winning band at this summer-long “tournament” gets a five-day, all-expense paid trip to Eugene, Oregon to hang out with the folks at the Ninkasi brewery, getting custom artwork, studio time and a spot on the Untapped festival lineup. — SJ

TTNG at Dada
Math rock is one of those really contentious genres. Some people are obsessed with the never-ending cerebral exercise that comes with trying to comprehend the often discordant onslaught of hammer-on/pull-off guitar playing. For other folks, it can be an effective tool to use in a Guantanamo Bay-type interrogation. Let’s face it, you already know which of those camps you fall into. To that end, you probably already know you feel about British math rockers TTNG (FKA, This Town Needs Guns), too, for that matter. — CG

Koolquise, Herrick & Hooley, -topic, Dandii Sun at Three Links
Organizers urge you to come experience the love they’re putting on, in hip-hop form. Aside from a chance to catch Koolquise performing with a live backing band, all guests will also receive a hard copy of Love Lost in [Translation]. — SJ

Morgan Myles at The Prophet Bar
The Nashville resident is a mellow blend of country and soul with an impressive voice to bring it all together. She has toured Europe and has opened up for country legend, Reba McEntire, too. — SJ

Kamikaze ’89 at Texas Theatre
It’s 1989 and a totalitarian corporation called The Combine holds a dystopian West Germany firmly in its grip. This serves as the loose plot for Rainer Werner Fassbinder’s cinematic swan song Kamikaze ’89. The bulk of the film follows an alcoholic police officer — garbed in a leopard print suit — on a mission to overthrow West Germany’s corrupt rulers. — CC

“Krip-Tik” at Kettle Art
When the term “Street Expressionism” is brought forth Jean Michel Basquiat is at the top of the list. Both Jeff Skele and Ruben Ramirez modeled their earlier art from the artist and are finally getting the recognition they deserve. — SJ

Bourne Marathon at Alamo Drafthouse (Both Locations)
Don’t just come for the midnight screening of the latest Bourne movie, come several hours early and catch three of the previous installments of the franchise leading up to it. — CG