Things To Do On Thursday, April 14. 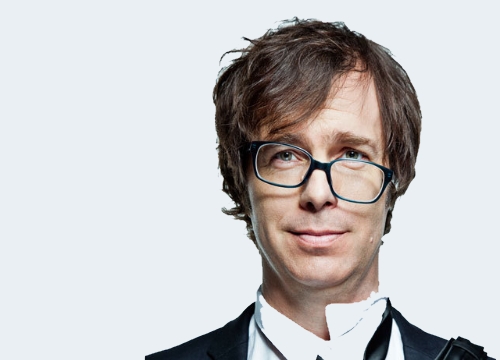 You may think that just because you live in the big city, wildlife isn’t a part of your everyday life. But that’s just not the case. From the pizza rats hanging out by the dumpsters behind your favorite restaurants to the pigeons Downtown that scatter as you walk past, there’s urban wildlife everywhere.

Author Nate Johnson’s new book, Unseen City, aims to point out the magnificent creatures that live right under our noses, most of which simply go unnoticed.

Hopefully, though, busy as you are, the magnificent amount of happenings around town tonight didn’t go unnoticed.

There’s a lot going on, right under your nose. — Cory Graves

Ben Folds and yMusic at Majestic Theatre
Once thought of as just another in a long line of piano-poppers, Ben Folds seems intent on proving himself capable of just about anything these days. After years of performing his pop tunes with orchestras all over the country, 2014 saw Folds and the Nashville Symphony Orchestra premiering the three-movement piano concerto that it had co-commissioned along with the Nashville Ballet and Minnesota Orchestra. That 20-minute virtuosic display went on to comprise the second half of Folds’ most recent album, last year’s So There. As for the front half of that record, Folds says his experience writing for orchestra inspired him to reframe the piano pop songs he’d been writing to fit into a context that’d make sense when presented alongside the concerto. For that, he told NPR, he called on yMusic, a little-known New York classical ensemble that helped rework eight of So There‘s tracks into full-on chamber pieces. For his current tour, which hits the Majestic Theatre tonight, yMusic is helping out Folds once again, serving as his live backing band. Judging from setlists and reviews from earlier dates on the current tour, you can expect plenty of classical and jazzy re-workings of songs spanning Folds’ entire catalog, including some Ben Folds Five stuff –and, yes, even the second and third movements of that piano concerto. For even more info on this one, check out our interview with Ben here. — CG

Dallas Stars vs Memphis Wild at American Airlines Center
The Dallas Stars are heading into the 2016 NHL Playoffs with the best record in the Western Conference. Only the Stars and the Washington Capitals over in the East accrued more than 50 wins this season. The Wild skidded in the playoffs on losing streak, landing the last available spot. Good luck to them in going against the Stars’ Jamie Benn and Tyler Seguin, two of the best players in the league. They’ll need it! — Roberto Aguilar

Brenmar and Sliink at RBC
Our old pal Brenmar’s well worth knowing: After years of honing his craft, the cutting-edge DJ and producer has in recent years developed a unique sound that melds his loves for hip-hop, R&B, pop, house and club music into one, singular, decidedly grimy and surprisingly gritty sound. It’s an amazing aesthetic — and you can hear it throughout Brenmar’s incredible catalog, which has found him doing everything from expertly remixing Beyonce, Kanye West and Dom Kennedy to dropping insanely incendiary cuts all his own while earning recognition both stateside and across the pond. Here at this show, he’ll perform “back to back” with his fellow Jersey Club purveyor Sliink, who himself has a notable collaborator list that includes names as varied as Flosstradamus and Fatman Scoop. Expect to get sweaty at this one. — Pete Freedman

Arden Myrin at Hyena’s (Dallas)
Arden Myrin is a very funny woman who has been doing her thing for over 20 years. In 1997, she starred in the TV series Working as Abby Cosgrove alongside Fred Savage. She had a few good years at MADtv, too, where she wrote a lot of her own skits. Currently, she’s a regular on @Midnight, hosts a ridiculous podcast called Will You Accept This Rose? that pokes fun at The Bachelor TV series and kicks ass in her new role on the show Fresh Off The Boat. — RA

Dallas International Film Festival
Today marks the beginning of the 10th annual Dallas International Film Festival. Ain’t that something? This 11-day festival organized by the Dallas Film Society includes exclusive film screenings, filmmaker luncheons, award shows, talks and short-film screenings. Really, there’s just too much going on to fit into this little blurb, so check out the link above for a full rundown. — RA

Operators at Three Links
Operators is a newly formulated group featuring members from Wolf Parade, Handsome Furs and Divine Fits. The band’s sound is analog synth-heavy with some new wave and post-punk elements — which just means you can dance and headbang all you want, we’re thinking. Bogan Via, a band very much deserving of a listen, joins the show with a neo-folk and new wave sound of its own. Think The Cranberries meets M83. Local goth rockers Aztec Death open. — RA

Raised Right Men Salute Merle Haggard at Dan’s Silverleaf
Raised Right Men are a local Denton classic country cover band that will be playing a tribute show to the late great king of outlaw country, Merle Haggard. Don’t just stay home and drink; do it at Dan’s where you can be the only hell your mama ever raised. — Paul Wedding

Leila Chudori at Deep Vellum Books
Here, Leila S. Chudori will be reading from her award-winning book Home and discussing her work with Will Evans, the owner of Deep Vellum Publishing. Chudori is an Indonesian writer and journalist who has enjoyed success for many years in her home country and abroad. She’s also been involved in writing scripts for the Indonesian TV show Dunia Tanpa Koma. And, heck, she’s won awards for that gig as well. — RA

Frisco Roughriders Opening Day at Dr Pepper Ballpark
The Frisco RoughRiders are back and facing off against the Northwest Arkansas Naturals for their home opener. The Rangers’ AA affiliate is also bringing back its Thirsty Thursdays promotion this year, which means $1 beers for you and me. And you definitely ain’t getting that over in Arlington. — PW

Divas of Drag at House of Blues
The Divas of Drag features some of the most popular drag queens from RuPaul’s Drag Race, including JuJuBee, Acid Betty, Trixie Mattel and several more. Expect a lot of singing and sequins. — PW

The Last Circus at Texas Theatre
The Last Circus (2010) is an amazingly gorgeous and stylistic film that follows the lives of deranged and sinful circus performers. Written and directed by Álex de la Iglesia, the film is superbly cast and, even more so, superbly fabricated through make-up, costume and cinematography. It goes through the whole swath of face make-ups including face-melting, face-cracking and face-splitting. If anything, this film stands out as a great piece of cinematic eye candy. — RA

Gungor at The Prophet Bar
The musical group Gungor is a husband-and-wife duo currently based out of Los Angeles. But Michael Gungor spent some of his college years at the University of North Texas practicing jazz guitar, so there’s your local angle. There are spiritual overtones to this group’s lyrics and album titles — Gungor runs a church in Denver — but it’s not an overtly Christian band. The band’s music overall is pretty mainstream indie-pop, and sounds inspired by Sufjan Stevens. Dossey from Austin opens. — RA

Sarah Jarosz at Kessler Theater
You wouldn’t know it from the stoutly mature togetherness of her music, but Sarah Jarosz is only 24 years old. That’s because she’s been tooling her folk-instrument chops since she was 10 years old, playing the mandolin and banjo. Jarosz has a way with creating poetic and poignant lyrics that melt your heart with every note in her satin smooth voice. The Austinite will be joined by local folkie Nicholas Altobelli here. — RA

Sister Hazel at Granada Theater
Sister Hazel is that band that made it big with that song “All For You” almost 20 years ago. And they’ve done their best not to evolve at all from their lowest common denominator sound ever since. It’s hard to say what it is folks see in them. Honey Island Swamp Band and Brad Ray open. — PW

Skatalites at Gas Monkey Bar N’ Grill
It’s weird how a band can grow and change as time goes on. Take, for example, the Skatalites, who formed originally in 1963. All of the founding members are now dead. So, it’s still the Skatalites, but with a radically different ensemble of people from when they first started. Regardless, they’re still all great musicians and are incredibly influential to bands such as The Police, The Clash, and No Doubt. Boss Riot, Shaka and The Broke$ open. — PW

Jacob Metcalf at Turner House
Baroque Dallas folk popper Jacob Metcalf will be performing the entirety of his January 2016 album Fjord at this show, sharing the songs he wrote while traveling across some five continents. There’s a real sincerity at play in Metcalf’s songs, which take on a lives of their own thanks to their intricate orchestrations. This show, in the historical Turner House, is sure to be a treat. — RA

K. Phillips at The Live Oak
Nashvillian K. Phillips is a musician singing to the downtrodden and the outcasts, telling stories to the classic Texas country sound with a lot of guitar and banjo. His lyrics are a little to straightforward for me, but there’s a lot of sincerity in his music, so that counts for something. Plus, members of Dallas ex-pats Somebody’s Darling back him. — PW