Things To Do On St. Patrick's Day. 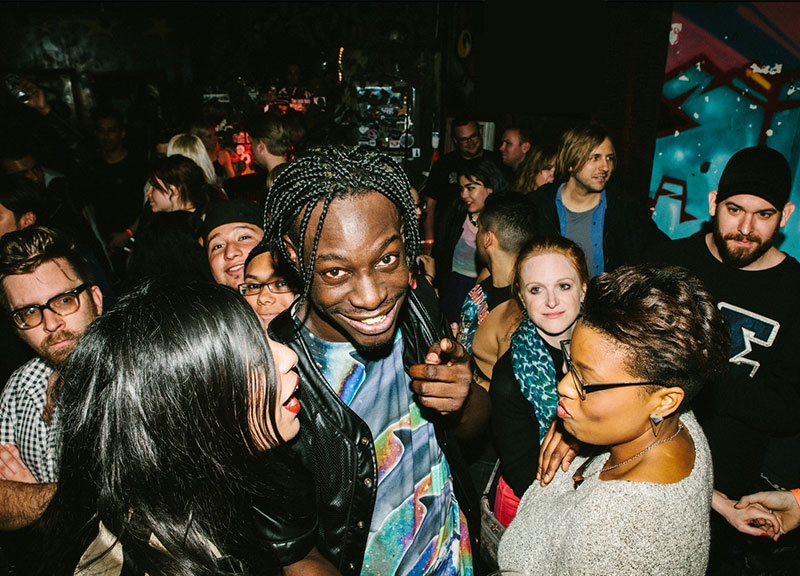 It's St. Patrick's Day so, um, wear some green. Or don't. Drink some green beer. Or don't. Do or don't do whatever you want tonight — with one notable exception.

Absolutely do not drink and drive tonight. For one thing, that's something you should never ever do. But also, this is another of the Dallas Police Department's No-Refusal DFW Iniatives. It lasts from tonight at 6 p.m. all the way through Monday morning at 6 a.m. During that span, officers will secure search warrants for blood samples for all persons suspected of DWI that refuse to voluntarily submit a breath sample.

And who wants to fuck with that noise? Today should be more about driving snakes out of North Texas than figuring out how to bail your drunk idiot buddy out of jail. Beyond that, here's a few more suggestions to consider. — Cory Graves

Le1f at RBC
Perhaps our favorite of the shows we helped put together during those glory days of the Red Bull Sound Select's monthly showcase run was the March 2014 showcase featuring New York City rapper Le1f at the Double Wide. Timing was everything at that one: The show — Le1f's Dallas debut — came right on the heels of both the release of his acclaimed Hey EP and a stirring performance on Letterman. And, man, it was a party. That's why we're stoked to even have the slightest involvement in his return to town, which we're helping Transmission Event present tonight. The show comes in support of Le1f's boundary-pushing debut LP, last year's Riot Boi, which is fitting because that's what Le1f shows have a tendency to turn all of its attendees into based on our prior experiences. — Pete Freedman

P.O.D. at Trees
This band may be an embarrassing relic of the early oughties, sure. But without them, where would Katy Perry be today? — Paul Wedding

St. Patrick's Day SXSW Showcase at Lola's Saloon
According to Paste, “Joe Gorgeous is the manic, glam, alter ego of Joey Goreman, the creator and front man of Fort Worth, TX garage rockers The Longshots.” Together with members of Kopecky backing him, his new solo effort leans a lot more Everclear than his jangly garage rock days of yore. That one came out last Friday, but you can grab a physical copy tonight as he returns to his old stomping grounds. Apollo Wild, Feletha Black, Beat Bums and Hightower also perform. — CG

Kevin Farley at Hyena's Fort Worth (Free)
Kevin Farley is the younger brother of Chris Farley. He's had several small roles in comedies such as movies like Tommy Boy and TV shows like Curb Your Enthusiasm. And if you go tonight it's free, so if you've got nothing better to do, this might be worth your while. — PW

Black Lilies at Dan's Silverleaf
Likening the Knoxville, Tennessee outfit to a male-fronted Alison Krauss & Union Station, Rolling Stone called The Black Lillies one of its bands to watch in 2014. Some would say they're still worth knowing. — CG

Pentagram at Gas Monkey Bar N' Grill
Frontman Bobby Liebling and a frequently rotating cast of backing characters have been playing heavy metal for going on four decades now. For what its worth, the early '70s incarnation of the band is regarded to be one of the first — if not the first — doom metal bands ever. Its first record in over 20 years was released back in August, which should at least give the band some new material to churn through this time around. — CG

Elayne Boosler at Kessler Theater
In the '80s, groundbreaking New York comedian Elayne Boosler was the first female comic to land her own cable TV special. Now, in ther 60s, she still tours the country doing relevant stand-up for most of the year. Linda Stogner gets the crowd warmed up. — CG

Pat Green at the Rustic (Sold Out)
Pat Green is one of the most famous Texas country musicians going. He started self-releasing his music in the mid-'90s and reached a huge amount of fame in the early oughties with Wave on Wave, some would say to a detriment, calling him a sellout after signing with Universal. But Green is back to his roots now and making the music he wants — at a club which he now co-owns. You better believe it's sold out. It's what he does. — PW

Deep Ellum Wine Walk: St. Patrick's Day Edition
If, for some reason, you prefer red wine over green beer, Deep Ellum events is throwing a bar crawl-turned-wine walk. You'll go from business to business tasting various wine samplings, and if you wear a kilt, you get your glass for free. There also be several chances to win prizes and get entered in drawings. — PW

All-Con at Westin Dallas Park Central
All-Con is a convention named for its goal of bringing in geeks and fandoms from all genres, from science-fiction to fantasy to anime and much more. There's a lot going on for the four-day convention, including special guests like the guy that played Greedo in Star Wars and Gigi Edgley from Farscape. There will also be gaming tournaments, cosplaying, burlesque, workshops and performances. — PW