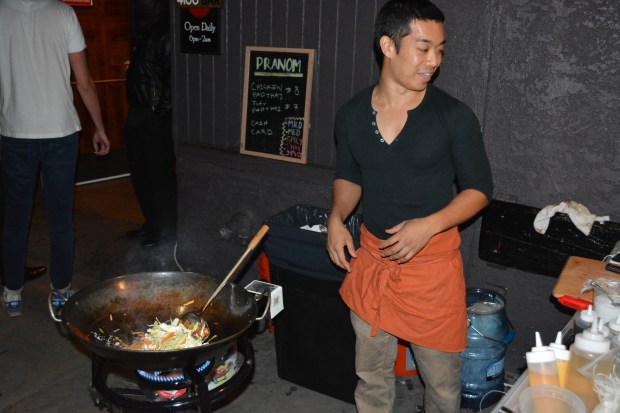 In his latest photo series, “3 Glasses,” Brazilian photographer Marcos Alberti made photo collages of his friends after one, two and three glasses of wine.

Is it just us or do people actually become more physically attractive after a glass of wine — regardless of which of you has drunk the glass, we mean? Alberti has put together a lot of evidence to suggest this is the case, anyway.

This beauty tip was brought to you by Central Track and its daily lists of things to do in Dallas. And now, without further ado, here is that list. — Cory Graves

CHON at Gas Monkey Bar N’ Grill
Math rock, oh, math rock. It makes you head bang in an ultra spastic manner. It makes you marvel at the all the finger tapping and triple drum rolls. Well, get your neck and marvels ready for CHON. The San Diego four-piece band has gone through a few different lineups, but has settled on a pretty solid team of calculated rockers. Get it? Calculate? Ugh. Polyphia and Strawberry Girls open. — Roberto Aguilar

Savages at Trees
Savages hails from London, and plays a melodic type of post-punk. Is there feedback from a twinkling guitar? Check. Deep, thudding bass? Check. Slow, punchy drums? You better believe that’s a check. Plus, the lead singer has a Nutella-thick French accent that helps bring a unique element to the band’s songs. Electronic artist Angus Tarnawsky of Brooklyn opens the show. — RA

Thy Art is Murder at The Rail Club
Back in 2012, Australian deathcore outfit Thy Art is Murder cracked the Top 40 of the ARIA Charts — the Down Under version of Billboard — making it the first extreme metal band to ever do so. It’s death growls for the masses. And while your mother might not approve, at least a few Australian moms apparently do. Rings of Saturn, Fit for an Autopsy and Dark Sermon open. — CG

Thai Kitchen Pop-Up at The Dubliner
Hollywood actor/chef Dream Kasestatad of L.A.’s famed Pranom is currently on a cross-country pop-up Thai Street Food tour that makes a stop on Greenville Avenue this evening. The kitchen opens at 7 p.m., and when the food’s gone it’s gone. Happy hour booze prices last all night, though. — CG

Speed at Alamo Drafthouse (Dallas)
Before becoming time-space-defying, lake house-dwelling pen pals, Keanu Reeves and Sandra Bullock first met aboard a city bus 12 years earlier — one that couldn’t drop below 50 miles per hour lest it explode. Pop quiz: That movie is showing tonight. What do you do? What do you do? — CG