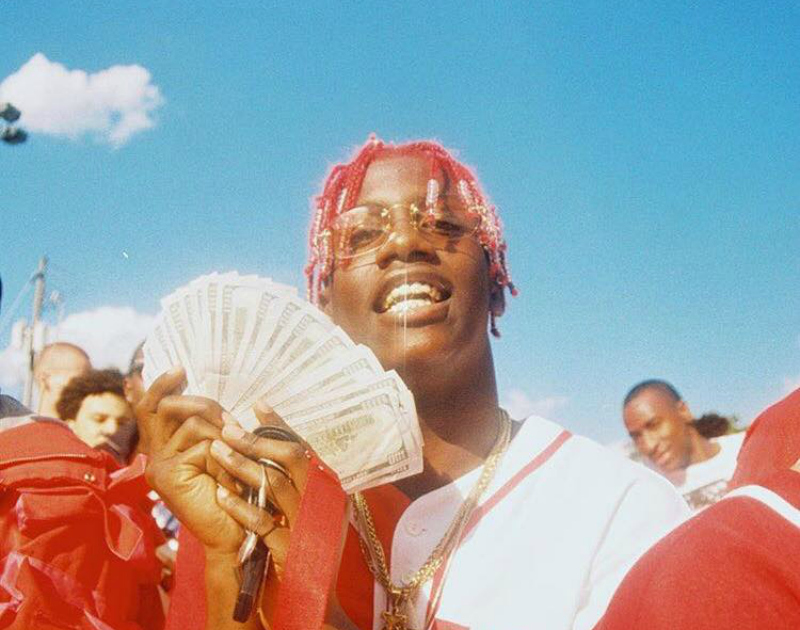 Mumble Along With Lil Yachty, Pound Margaritas Around Deep Ellum, Buy Cheap Books At The Dallas Public Library And 50 Other Things To Do This Weekend.

A lot of folks say we’re inching closer and closer to the end of days.

And after learning about how the global demand for butter is causing shortages in Europe, we can at least admit that these are dark days indeed. Prices went up about 20 percent throughout Europe during June. And price hikes are mainly rooted in the facts that demand for the creamy substance has risen in China and because production in Europe has dipped.

But it turns out that butter may not actually be as bad as it was originally thought, so maybe Paula Deen was right about at least one thing.

Let’s hope that Europe starts producing more butter and that it does’t get in the way of any of our tasty meals stateside. While that gets sorted, feel free to spend your weekend at one or more of these events, where butter-rich food can’t be that far away. — Obed Manuel

Jidenna at Trees (Sold Out)
Hip-hop rapper who graduated from Stanford, so you know there are smarts behind his beats. — PE

Lil Yachty at The Bomb Factory
The Georgia rapper stops in town with his red braids on his Teenage Tour. — PE

Ying Yang Twins Birthday Celebration at The Whippersnapper
Shake it like a salt shaker at this birthday shindig for local VIP Phil Shanbaum. No cover. — OM

CJ Starr at Hyena’s Comedy Club Dallas
CJ Starr can joke about anything like spending 10 years at community college or going through his 30s, so yeah, he can make just about anybody laugh. — OM

SLC Punk!,  SubSahara, Loafers, Thyroids at Texas Theatre
Watch this film about ’80s punks going to concerts and then enjoy a concert with some local punk bands. — PE

Amber Does Dallas: The Rocky Horror Picture Show at Angelika Film Center
Join the band of misfits on their take of this cult classic. A story of love, adventure, camaraderie, music and most importantly, sex. — PE

Queen of the Underground at Sue Ellens
Watch these ladies tear the ring down. It’s like WWE Divas all over again but with real wrestling. — PE

Sleeping Jesus at Double Wide
Sunny indie rock vibes for those who love listening in on songs about love and despair. — PE

Ellumfest 2017
A Deep Ellum pubcrawl supporting local children’s charities and Dallas Margarita Society. Drink up for a cause. — PE

Chris Norwood Album Release at Three Links
The Dallas singer-songwriter will play songs that will make you miss your ex. — PE

Midnight Madness: Office Space at Magnolia Theatre
Three workers who despise their desk jobs decide to rebel against their boss in the most hilarious ways. — PE

Gorilla vs Bear VI at The Bomb Factory
Washed Out, Jessy Lanza, Jacques Greene, She-Devils and many more will take the stage at this installment of the ongoing indie music showcase. — OM

Totally ’90s with Kel Mitchell at British Brewing Company
Beef up your Dallas pub knowledge and ask Kel Mitchell if he still remembers how to make the Good Burger. — PE

Blondie, Garbage at Gilley’s
Nothing like a couple of bands that helped shape the modern rock ‘n roll movement. — PE

Brett Johnson at It’ll Do Club
Bust a move and maybe a hip with a DJ who knows how to rock a crow with some dance and electronica tunes. — PE


An Inconceivable Evening With The Princess Bride’s Cary Elwes at The Majestic Theatre
Watch the iconic film and then stick around for a Q&A with Cary Elwes and hear some behind the scenes stories. — OM

Authority Zero at Gas Monkey Bar N’ Grill
Authority Zero stops in Dallas on its Broadcasting To The Nations 2017 tour with special guests The Supervillains. Shaka and Jon Gazi open the show. — OM

I’m The One Who’s Fighting at Double Wide
Live and rock out in the post hardcore era. Kaleider of Austin and Classy Affair open the show. — PE

Cool Out at Off The Record
Tony Schwa will be playing everything from Boogie to Funk to keep your night fresh, — OM

Saved By The ’90s at Red River Cowboy
Throw on your high-waisted mom jeans, overalls and brightly colored windbreakers to get into that ’90s mood. — PE

Washed Out Live at The Bomb Factory
Bedroom lo-fi synthpop with a chill sound and vibe. — PE

BBQ, Beats, & Brews 2 at The Bearded Monk
Summer isn’t over just yet. Sample the best BBQ as local meat masters compete for the best BBQ in Denton crown. Enjoy music from local artists and a few cold beers. All proceeds will benefit Serve Denton. — PE

Cookie Monsta at Stereo Live
Not the Sesame Street character you know you love. Instead you get loud and hectic dubstep music. — PE

JG And Friends Fest at AT&T Performing Arts Center
Chief Keef, Ski Mask The Slump God, Robb Banks and Yung Simmie all at this one jam-packed rap fest of the summer. — PE

Matya at The Foundry
A free show of high-energy pop with a Latin twist. — PE

Alesana, Eyes Set To Kill, Lakeshore, Alteras, The Amatory Murder at Trees
What do you call a group of alternative rock bands? There’s a herd of antelope, a troop of baboons, a swarm of bees, but what about those guys? I’m calling it a “murder,” like with crows. Anyway, come see this murder of alt-rockers. — AC

August Flea Market at Double Wide
Whether you need more junk cluttering up your home or less of it, the Double Wide has you covered with their monthly flea market. One improvement they offer over your average bazaar? Booze. — AC

Roger Creager at Love and War in Texas
Raw country tunes from the man Rolling Stone dubbed “the hardest working — and playing — man on the circuit.” — AC

Late Brunch at The Nines
The weekends are for sleeping in, but sleep in too much and you’ll miss that essential meal, brunch. Well fear not, The Nines has you late starters covered from 3 to 7pm. — AC

The Leo Party at The Church
Join together with your fellow Leos to celebrate a turning of the zodiac with a gothic industrial get down featuring Joe Virus, Lord Byron and Bill Stanley. — AC

It Hurts To Be Dead, The Dolly Llamas, Ratchet Action Cult at Three Links
Raucous garage action from this trio of punk rock bands. An all-ages show for just $5. — AC

The Yacht Club at Off the Record
Just because Dallas is landlocked doesn’t mean you can’t enjoy a posh yacht party. — AC

The Hottest Half at Continental Bridge
Do you secretly see an upside to global warming? This time of year, do you say “nice weather out” non-ironically? Is “hot yoga” basically what you’d call regular yoga? Well, have we got a marathon for you. — AC

Manchester United vs. West Ham Watch Party at Henderson Tap House
The Red Devils and The Hammers face off and what better way to watch than at the pub? Well, less of a pub and more of a sports bar, but stay with me here. — AC

Not Ur Girlfrenz at Curtain Club
A preteen power trio banging out covers of classic rock jams. — AC

Hemingway Book Club: When Bad Things Happen To Good People at Black Swan Saloon
“Read sober, discuss drunk.” That’s the motto of the Hemingway Book Club that is currently taking on the classic When Bad Things Happen To Good People, a nonfiction theological examination of why bad things happen from the point of view of its author, Rabbi Harold Kushner, who himself experienced the loss of his 14-year-old son to a rare genetic disease. Heavy stuff. You’ll need that drink.   — AC