Things To Do in Dallas This Week: November 12 – November 15. 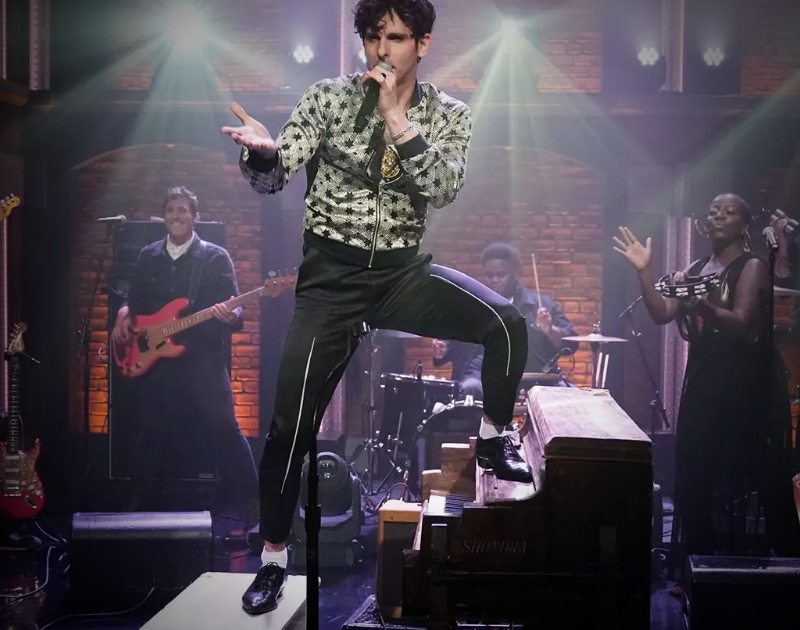 Get Way Too High With Low Cut Connie, Roll the Dice at a Board Game Convention, Feel Pretty With Amy Schumer and Take One Last Look at Psychedelic Robot.

Wannna see something impressive? This Milwaukee Bucks fan names 27 cheeses in 30 seconds during one of those in-game contests.

For her winning effort she was awarded a signed ball from player Sterling Brown.

But we’re not done impressing you. Depending on how fast you scroll, you can find out about 34 goings on for the coming days in probably about that same half-minute span.

For your efforts, you’ll be awarded with a list of places to have yourself a ball, too. — Cory Graves

Andy Grammer at House of Blues
The feel-good pop singer hits Dallas. It’s a good time to be alive. — CG

Low Cut Connie, Ruby Boots at Dada
The hard-driving rockers, led by flamboyant and ferocious frontman Adam Weiner — pictured above performing on Seth Meyers — recently caught the ear of Sir Elton John, who was quick to thrust praise on the piano-based outfit. — CG

The Help Keno Show: Nonstarter, Sloth Fist at Wits End
This punk show with a purpose will be helping out popular Anvil Pub bartender Andy “Keno” Buettner, who was laid up pretty bad in a motorcycle accident a month back. — CG

Vundabar, Illuminati Hotties at Dada
Angular-but-poppy indie-rock trio, Vundabar, has been picking up steam in recent years. Unlike many an indie outfit, this Boston trio rarely takes itself too seriously, and its all the better for it. Hall Johnson opens. — CG


Guys and Dolls at The Magnolia
The greatest actor and singer of a generation (read: Brando and Sinatra) team up to bring this stage classic to life on the silver screen. — CG

of Montreal at Trees
Six albums into of Montreal’s career the band made the dramatic shift from technology-shunning, ’60s-aping to making some of the most interestingly chaotic, electronic-influenced pop music of the aughts. For the nine albums that followed the sea change in philosophy frontman Kevin Barnes took to writing and recording most of the works himself, partially alienating his friends, family and bandmates in the process, and discovering alter egos in the depths of his personality. Sure, Barnes struggles to reconcile the value he places on art versus how he treats those around him; and while those deficiencies may not make Barnes the greatest role model, they are part of what makes him one of the most prolific and interesting artists of our time. — CG

Thrice at House of Blues
Earlier this year, the longtime post-hardcore released its most accesible album to date. The Bronx and Teenage Wrist open. — CG

Billie Eilish at Granada Theater (Sold Out)
Seemingly overnight, the spider-obsessed singer-songwriter has become wildly famous, selling out every venue on this tour weeks in advance with her dark visuals and off center, low-tempo pop. — CG

Drivin’ N’ Cryin’ at Sundown
The best live guitar player I’ve ever seen used to play with Sturgill Simpson. Now he plays with these boys. — CG

Smoking Popes at Curtain Club
Though the reunited pop-punk crooners are celebrating the 20th anniversary of Destination Failure, it isn’t just a greatest hits tour — they’ve got a brand new record out, too. — CG

Poolside, Le Youth and Sarah Jaffe at The Rustic (Free)
You can thank the Texas Lottery — and all the saps that bought losing tix — for your free admission to this “daytime disco” which takes place at night. — CG

Paige Quiñones and Megan Peak: Inner Moonlight at The Wild Detectives
The monthly poetry event is back again. — CG

The WLDLFE at 2513 Deep Ellum
The alt-rockers are fresh off a summer run in support of Halsey. After living that stadium life, they come back to earth in scuzzy ol’ Ellum. Phangs and Nothern National open. — CG


Ina Garten at Dallas Museum of Art (Sold Out)
The Barefoot Contessa recently burned Trump, but she’d never burn a dish. Here she is talking about her new cookbook. — CG

Board Game Geek Con at Hyatt Regency
The BGG.Con Game Library is insane. They have what feels like every board game ever made and they’re all available for attendees to borrow. With so many amazing options, we obviously chose the one where you stack toy animals on top of each other until they fall down. It was really hard and I’m pretty sure nobody won. Read my review of a previous year’s con here. — Ryan Sheffield

Ian Sweet at Three Links
After working as a trio the past few years, Jilian Medford ditched her mysogonist band and made her best record to date. Young Jesus opens. — CG


“Pyschedelic Robot” at Bivens Gallery
The pop-up immersive art show has gained some recognition the past two weeks for stripping away all the B.S. of pretentious “art is only for the high-class” and leveling the playing ground. It ends its first run here. — Claire Lin

Amy Schumer at Winspear Opera House
The I Feel Pretty writer and star brings her new stand-up act to town. Needless to say, since her surprise wedding, pregnancy and recent activism, she’ll have much new experience to pull material from. — CG

Travis Scott at American Airlines Center
Two short weeks after playing to 15K at the maligned Posty Fest at the Starplex, the Houston rapper’s back playing to just as many people on his own headlining show. Now that’s star power. — CG

An Evening With Becky Middleton at The Stoneleigh Penthouse
I’ve been getting press releases for Middleton’s forthcoming record for over a year now, and now it looks like Break the Fever is finally coming out this week. It’s a fact that’ll be celebrated at this penthouse release party. — CG

Syndey Anderson (Album Release) at The Epic Theater
The pop country singer has been at it for over a decade, even taking vocal lessons from the same coach as Demi Lovato and Selena Gomez. She does sing well, and could just as soon blow up in the pop “country” world in the way Demi and Selena did in the straight pop arena. It’s nice to have goals, anyway. — CG

3OH!3 & Emo Nite at Gas Monkey Bar N’ Grill
Headlining this edition of the Emo Nite party (now at its new home) are the Colorado emo-rappers that once told us to “do the Helen Keller and talk with [our] hips.” — CG

Soja at House of Blues
Arlington, Virginia’s SOJA is widely considered one of America’s best reggae bands. Something of a backhanded compliment? Sure, but an accomplishment nevertheless. The band’s currently signed to Dave Matthews’ ATO Records, which has put out its last few records. — CG

Father at Cambridge Room
Newly signed to RCA, the quirky Atlanta rapper has been called things like “refreshingly mischievous” and a “most charming oddball.” It’s a brand of subversive that everyone loves from the underground to the mainstream. — CG

Ramen and Sake Dinner at Dallas Fish Market
If the only ramen you’ve ever had cost less than a buck and was slurped down in a college dorm, you probably don’t quite understand yet why some folks are willing to dish out $70 for a really good bowl of the stuff. — CG

Jason Bonham’s Led Zeppelin Evening at The Bomb Factory
Bonzo’s son is right up there with his dad as far as ferociously pounding the skins go. What he, perhaps, lacks in his old man’s creativity, he makes up for with an encyclopedic knowledge of pop’s work with Zeppelin which he can regurgitate almost verbatim. — CG